By Satyanarayana Dasa: While traveling in the West and lecturing on the Bhagavad Gita, one of the most common questions asked by peace loving Western students is, “Why is Krishna preaching and almost forcing Arjuna to take up weapons against his own kinsmen while Arjuna shows no interest in it and argues against the ghastly warfare and its irreligious and immoral outcome?” 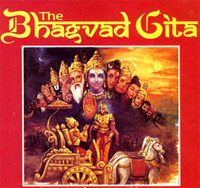 While traveling in the West and lecturing on the Bhagavad Gita, one of the most common questions asked by peace loving Western students is, “Why is Krishna preaching and almost forcing Arjuna to take up weapons against his own kinsmen while Arjuna shows no interest in it and argues against the ghastly warfare and its irreligious and immoral outcome?”

They assume Krishna to be a warmonger and Arjuna a champion of peace—a compassionate and kind-hearted dude. Indeed, anyone who gives a cursory reading to the first chapter of the Gita sympathizes with Arjuna and is puzzled with Krishna’s preaching to Arjuna to stand up and fight. Even Mahatma Gandhi, an ardent lover of the Gita, could not digest Krishna’s instruction to Arjuna to fight, and thus commented that the whole plot of the Bhagavad Gita is allegorical. Truth, however, is more mysterious than it appears.

As is understood from the preceding chapters of the Mahabharata, Krishna had no personal gain in engaging Arjuna in the battle. He himself vowed not to take to weapons although approached by Arjuna to support their side. Indeed, He even volunteered to meet the opposite side for a truce to avoid the family feud. But the opponents, who were illegally occupying the kingdom of Arjuna’s brother, refused to part with even an inch of land, and challenged Arjuna and his party that if they had the power and grit, they could snatch away their share of the kingdom by force.

Arjuna and his brothers were ksatriyas, royal soldiers, and had no choice but to take up the challenge and save their kingdom or country from the clutches of the opponents.

Arjuna came well prepared to Kurukshetra, where the battle was about to take place, and was full of enthusiasm. He was the greatest war hero of his time, acknowledged even by his enemies. But after seeing his relatives face to face his material attachment surfaced and subdued his sense of duty. He became confused about the righteousness of war against his own irreligious and immoral cousins. Krishna was his chariot driver. He followed Arjuna’s instructions to move the chariot. But when confused, Arjuna requested Krishna to clear his doubt regarding his duty in this complex situation. Krishna advised in the best interest of Arjuna.

Since Arjuna was a warrior, Krishna advised him to perform his duty without self-interest. If a soldier does not want to engage in war but wants to be a mendicant instead, as proposed by Arjuna, then he should not join the army. It is paradoxical to join the army and then refuse to fight when the need arises. The army has the responsibility to protect a nation from its enemies. By engaging in warfare when necessary, the army grants a peaceful life to the civilians. The duty of a policeman, a soldier or a king, is to be impartial for the sake of the nation, even if they have to stand up against their own teachers or relatives. 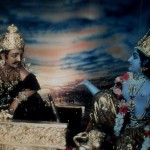 Krishna is not propagating violence. Rather, he is imploring Arjuna to vanquish the enemies, i.e. his cousins, who plotted to kill him and his brother surreptitiously by poisoning their food, setting fire to their residence and other such hideous means. A soldier protects citizens and prevents violence.

In modern times, terrorists attack innocent civilians and inflict pain and suffering on them for an ultimately selfish purpose like enjoying heaven or materially benefitting their family members and kinsmen because it relates to the material body. The job of the police and army is to face such terrorists and protect the civilians.

A soldier is brave and a terrorist, who is motivated by hatred, is a coward. While causing fear, he himself is full of fear. He remains hidden, while a soldier faces the situation with bravery. A terrorist is not an object of compassion for a soldier.

An Antidote to Unjust Violence

Arjuna was confusing his material attachment with compassion, which resulted in cowardly behavior. If a serial killer or a terrorist enters the house of a civilian who has a gun and can use it to protect himself and his family members, should he bravely face the intruder or become a compassionate peace loving saint and allow his family to be murdered? If someone, like a police officer, advises him to take the gun and face the intruder, is such an advisor to be branded a violent nut?

Deliberate on this and see if Krishna was wrong in advising Arjuna to fight with the criminals who stripped his wife, a queen, in front of his own eyes, and in the presence of the very people who were now standing against him with weapons in hand. These very kinsmen had sat speechless, and some even mocked the hapless, innocent queen of high moral character and her husband and did not oppose the stripping.

Krishna is not preaching to Arjuna to be violent against innocent civilians like a terrorist. He is asking him to be brave in the face of the imminent situation. A coward runs away after his act of violence. Arjuna also wanted to run away, albeit from the war. Lord Krishna advised him not to be a coward and do his duty as a soldier. So, it is an antidote to unjust violence.

Bodily Attachment as the Real Cause

If Arjuna had run away from his duty as a soldier, he would have become instrumental in allowing unjust violence. Moreover, being a celebrity and a great hero he would have set a bad precedent for other soldiers. His opponents, who respected his bravery and chivalry, would have ridiculed him. They would have thought that Arjuna became fearful and ran away after seeing his opponents on the battlefield (which included great warriors like Bhisma and Drona), on the pretense of being compassionate toward them.

The real cause behind Arjuna’s confusion is his attachment to his physical body. The misidentification with the physical body is bringing a sense of fear and loss, manifesting as compassion. Krishna saw through this and advised Arjuna to not be bogged down by this ignorance.

Krishna is not preaching unjust violence in the name of religion. Unjust violence is deeply rooted in selfishness. Krishna teaches to rise above hatred and attachment, be equipoised in all situations, and do one’s duty, which happens to be fighting in Arjuna’s case. His advice is not specific to Arjuna only, but applicable to all human beings. He propounds action without hatred and attachment.

Equanimity and Performance of Duty

Bhagavad Gita was spoken more than 5000 years ago. It is one of the most popular Hindu scriptures. In this long history, there is not a single instance where someone became a terrorist after reading the Gita. But there are thousands of people who became peace loving by following the instructions of Krishna. Indeed, the Gita was an inspiration for Mahatma Gandhi’s non-violent movement. He even wrote commentaries on it.

Therefore, to think that Krishna incited Arjuna to unnecessary violence is a complete misunderstanding. Krishna teaches equanimity in life and performance of one’s designated duty. He does not encourage everyone to take to weapons and fight in the name of God. But a soldier has to take his weapon to bring security to the civilians. Otherwise, why join the army?

A terrorist inflicts pain on others whereas a soldier sacrifices his own life to bring security and peace to people. They both may take the gun but their intentions are poles apart. A surgeon inflicts pain by moving his knife into the body of a patient, and a mugger may also attack someone with a knife. We laud the surgeon and punish the mugger. We need to study the intention behind an action to know if it is an act of violence or peace.

Violence can be motivated by selfishness or to maintain peace and order (dharma). If Krishna was propagating violence, then all the world’s military organizations would be nothing but havens for breeding violence at the expense of taxpayers’ money. Defensive violence is necessary for maintaining peace. Otherwise one may face the same fate as a peace-lover like Martin Luther King Jr or Mahatma Gandhi.