Continuation of a discussion following a seminar in Terre de Ciel:

Every morning, Krishna’s mother Yashoda used to make butter from milk. She heated the milk and added some yogurt to it. She let the mixture sit overnight and by the next morning, it had become yogurt. Yashoda then churned the yogurt with a wooden stick and churning rope and after some time it became liquid and fresh butter floated on the surface. Yashoda removed the tasty butter and placed it in a clay pot.

So one day when Yashoda was churning the yogurt, Krishna climbed on her lap and started to drink milk from her breast. In the other room, Yashoda had cow milk for Krishna heating on the clay stove. When she heard the sound of milk boiling over, she immediately removed Krishna from her lap and ran to remove the milk from the heat. Krishna became very upset, thinking “What is this? I am drinking milk and she is running there! The great yogis are meditating on Me to have My darshan, and here I am drinking milk from Yashoda and she throws Me from her lap.” So He took a stone from the ground and hit the clay pot, breaking it. When the yogurt spilled all over, He quickly ran away, afraid of being punished.

When Yashoda came back and saw the yogurt on the floor, she understood it was Krishna’s game. She was thinking, “This boy is too naughty. I have to chastise him!” She found Krishna in another room, breaking the pots with butter in them and feeding it to the monkeys. When Krishna saw Yashoda approaching Him with the stick in her hand, He started running away. Yashoda chased after Him. 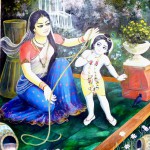 After a little struggle Yashoda caught Krishna and wanted to punish Him. At first, she twisted His ears and said, “Why did you do this?” Of course Krishna didn’t have any answer. She said, “You have become a very unruly boy. I am going to teach you a lesson. I will tie you with a rope and put you in the corner!” So she got some rope and tried to tie Krishna around the waist and the other end to a heavy stone in order to keep Him in one place for some time. But when she took the rope and put it around His waist, although it was long and Krishna was only a baby, the ends didn’t meet. The rope was too short by two fingers. Then she thought of adding another rope. Since Krishna’s parents were cowherd people, they had many ropes around to tie the cows. So Yashoda attached another rope to the previous one, but again the rope was too short by two fingers. She was very surprised. How is this possible? Krishna’s waist still remained the same size. He didn’t expand His belly by some mystic power. He was just standing there like a small boy. Determined to tie Krishna, Yashoda got another rope and tried again. Finally, seeing that His mother was very determined and working very hard to tie Him, Krishna allowed her to do so. So Yashoda was able to tie Krishna only because he agreed and decided to be tied by her.

This story is very interesting in that Krishna showed both His personal and impersonal features simultaneously. This is the key point. He remained a person standing in one place and Yashoda could see Him, but at the same time He manifested His impersonal feature as the power that did not allow Yashoda to bind Him. We can’t tie anything impersonal.

So God has both features: personal and impersonal, and both exist simultaneously. He has a form, but it is not material. Our body is made of matter and therefore is limited, but God’s body is made of spirit. Similarly, the soul (atman) is also made of spirit and is therefore not limited. Although it is very small and cannot be seen inside the body, it spreads its consciousness throughout the body. Basically, the impersonal aspect is a feature of the personal God. The Sun planet, which has a form and is situated in one place, has light that spreads all over the universe. In the same way, God has His personal form and by His energy, He is everywhere. He can remain in one place and yet He can be everywhere.