By Satyanarayana Dasa – At present I am working on Paramātmā Sandarbha, the third book of Jīva Gosvāmī’s Ṣaṭ Sandarbhas. I thought of sharing the 93rd Anuccheda of the book, which is an elaborate analysis of the nature of Bhagavān and His relation with the world and His devotees

At present I am working on Paramātmā  Sandarbha, the third book of Jīva Gosvāmī’s Ṣaṭ Sandarbhas. I thought of sharing the 93rd Anuccheda of the book, which is an elaborate analysis of the nature of Bhagavān and His relation with the world and His devotees. It also deals with the question why there is so much suffering in the world if there is a God who is merciful. I think it will be interesting for our readers and give a peek into Paramātmā Sandarbha. It is a long anuccheda. So for easy understanding, I have divided it in six parts, as I did with the lengthy anucchedas in Bhagavat Sandarbha.What follows is the translation of the original text and my commentary on it.

Objections to the Agency of Bhagavān 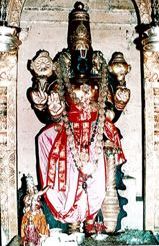 Although the conclusion regarding the Lord’s threefold cosmic play (līlā) of creation and so on has been undertaken in a general way, it is now elaborated again in a specific manner, by addressing various objections, according to the principle of “driving in the post” (sthūṇa-nikhanana-nyāya).

A question is raised: Does the Supreme Lord Himself personally appear or not as the avatāras who descend in the course of His cosmic play of sustaining the universe, and does He or does He not perform the various līlās of these avatāras about which we hear, such as siding with the gods (suras) by exhibiting a smile expressive of His pleasure or by granting them fearlessness, or by killing the asuras by doing battle with them?

If He does, then not only would the objection raised earlier [in Anuccheda 85] become verified [that He is influenced by the guṇas], but He would also be subject to [the flaw of] favoritism [towards the devas]. If He does not, then all these avatāras and their līlāsare shown to not be part of the Lord’s essential nature and thus the previously accepted conclusion falls to pieces.

While fixing a pole in the ground or a peg in a wall, the more the pole or peg is hit by a hammer, the more firm it becomes, and then it will not shake. This is called sthūṇa-nikhanana-nyāya, or the principle of driving in a post. The more objections one can raise against a theory and then answer, the more firmly that theory is established and indeed becomes unshakable.

Śrī Jīva has already substantiated that Bhagavān is the agent behind the creation, sustenance and destruction of the universe, and yet is neither influenced by the guṇas nor undergoes any modification. He now raises further doubts to this position to make it absolutely clear. One of the reasons he does so is to uproot any traces of non-theistic leanings from our minds. The non-theists (i.e., the radical nondualists) admit the existence of a conditioned God, but in their view this God is also a product of māyā and not a transcendental person. Therefore, He cannot be the ultimate object of devotion. The author wants to completely rid us of this misconception.

If Bhagavān is the agent of such activities as protecting the devas and killing the asuras, then He must be influenced by the material guṇas,otherwise how could He behave in this manner? Moreover, if such were the case, He would not be equal to all, but biased against the wicked and favoring the saintly. Surely such behavior is not possible for one who is beyond the jurisdiction of material nature.

On the other hand, if it is said that these activities are not performed by Him directly, then it would contradict the principle that His actions and attributes are part of His inherent nature . This is the doubt that is being raised.

Bhagavān Acts Only for the Delight of his Devotees

The answer is as follows: It is true, Parameśvara does nothing at all to sustain the universe. But He manifests various avatāras and līlās exclusively through the display of His intrinsic potency to give pleasure to the Vaikuṇṭha associates who descend with Him, as well as to the devotees among the devas engaged in universal administration, and to other devotees not directly involved [in these pastimes]. This is stated in Padma-purāṇa:

Although I am able to annihilate the asuras in a mere moment (muhūrta), I still perform various activities for the pleasure of My devotees. A fish, a tortoise and a bird nourish their offspring by seeing, reflection, and touching respectively. So also do I [nourish My devotees], O Brahmā.

I am fully satisfied always, and I take various births to fulfill all the desires of My devotees. So please tell Me, what can I do to please you? (HBS 14.31)

And there is also Kuntī Devī’s statement:

You have appeared to grant bhakti-yoga to the pure-hearted paramahaṁsa sages. So how can we women see you? (SB 1.8.20)

In this verse, the phrase “to grant bhakti-yoga” (bhakti-yoga-vidhānārtham) means that the dissemination of bhakti is the purpose of His appearance. This is also the opinion of Śrīdhara Svāmī in his commentary on this verse. There is also the following statement of Śrī Brahmā:

In order to expand the totality of bliss of those who are surrendered to You, O Lord, You imitate the ways of the world on earth, though You are beyond all connection with the world. (SB 10.14.37)

[That the manifestation of līlā and avatāra is] a display of the intrinsic potency is shown by Śrī Brahmā himself:

So that I may remain untainted by my work, even as I create this universe, which is a display of His creative power, may the Lord, who fulfills the wishes of those who take refuge in Him, engage my mind in the divine play He performs, manifesting many transcendental virtues when He descends (gṛhīta-guṇāvatāra) along with His intrinsic potency, Ramā. (SB 3.9.23)

In this verse, the compound gṛhīta-guṇāvatāra means, the avatāra of the Lord in which He takes on qualities such as mercy. In this way, while manifesting these avatāras exclusively for the pleasure of His devotees, the work of His extrinsic potency māyā in the form of protecting the universe by such things as siding with the suras occurs of its own accord, even without His conscious inspection.

Just as in the world, when devotees assemble together to heighten their exultation of love for the Lord, they may gather some drum players who are unacquainted with the ecstasy of such divine love, and while dancing, being intoxicated by singing the glories of the Lord, they destroy the inauspiciousness of the world and at the same time increase its auspiciousness. This is expressed in the Eleventh Canto, “A person endowed with devotion to Me purifies the entire world” (SB 11.14.24). It is similarly said in the following verse:

Lord Hari’s creation of the world is verily without anticipation of any particular result. He does so out of His bliss alone, just like the dancing of an intoxicated person.

Śrī Jīva accepts the second of the two options raised in the previous section, that although Bhagavān personally appears as the avatāras who descend in the course of His cosmic play, He does not act for the sake of maintaining the universe. This He could do even without descending upon the earth. Merely by His will He could destroy the miscreants by sending them some natural calamities, and in that way accomplish this purpose. But Bhagavān acts for the delight of His devotees. It is for this reason that He creates the universe, accepts avatāras, and performs pastimes. This is why His activities are called līlā or divine play. 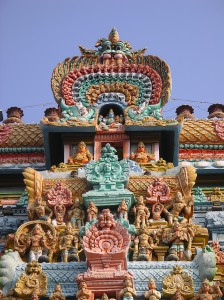 The maintenance of the universe is a concomitant effect of His dalliance with His devotees, just as when one cooks food on a wood fire for one’s pleasure, one may also alleviate the distress caused by the cold. In the course of His līlā, Bhagavān may kill the wicked when they cause a disturbance to His devotees. As a side effect, people in general are benefited, even though Bhagavān acted only for the devotees’ welfare.

Śrī Jīva gives a contemporary example of devotees who gather and perform saṅkīrtana for the pleasure of the Lord. Although they do so for His delight, it brings auspiciousness to the whole world because of the power of devotion (SB 11.14.24). They may also engage some non-devotees to accompany them in playing musical instruments. These musicians also receive divine blessings, even though that was not their primary intention. A person can perform an action to achieve something he lacks, or just out of inner delight. We belong to the first category and have no experience of the second state. Bhagavān acts out of bliss like an intoxicated person who dances out of sheer joy, and not to get joy.