By Satyanarayana Dasa: Everybody in this world has certain qualifications to perform specific duties or activities and, in so doing, gains satisfaction, happiness and success. If a person tries to perform duties or activities that he is not qualified to perform, then, in all probability, dissatisfaction, frustration and misery for himself, and possibly others, will result. Therefore, one of the very basic principles taught in Bhagavad Gita, is to work according to one’s qualifications. Krishna Himself says para dharmo bhayavaha— to perform the duty for which one is not qualified is dangerous. 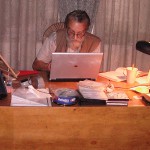 Everybody in this world has certain qualifications to perform specific duties or activities and, in so doing, gains satisfaction, happiness and success. If a person tries to perform duties or activities that he is not qualified to perform, then, in all probability, dissatisfaction, frustration and misery for himself, and possibly others, will result. Therefore, one of the very basic principles taught in Bhagavad Gita, is to work according to one’s qualifications. Krishna Himself says para dharmo bhayavaha— to perform the duty for which one is not qualified is dangerous.

Here’s a story to illustrate this point.

A washer man once owned a donkey and a dog. The washer man took good care of the donkey, because it carried loads of clothes to and from the river, where the washer man washed them. The washer man did not find the dog very useful, so he did not feed him properly. The dog was famished and emaciated.

One night, while the washer man was deep in sleep, a thief entered his house. The dog and the donkey both noticed the thief. The dog did not bark, although that was expected from him. Seeing this, the faithful donkey admonished him for not doing his duty. The dog replied contemptuously that the master did not care for him, and, therefore, he also did not care for the master. Hearing this, the donkey was enraged and decided to wake the master up by braying loudly. The washer man woke up and was confused:  why was the donkey braying? He thought that maybe he had been treating the donkey too nicely and had spoiled him to the extent that he was now unruly.

To teach him a lesson, the washer man got up from his bed and beat the donkey with a stick while abusing him verbally. The washer man then went back to bed. Meanwhile, the thief slinked away.

The dog who had been observing what was happening,  then asked the donkey, “How do you feel, my dear friend? You received a generous reward for your service.” Obviously, the donkey realized his mistake.

As different people have different qualifications, the Vedic scriptures instruct according to these qualifications.  Everything is not applicable to everyone. This unique characteristic of the Vedic scriptures is often overlooked. There are separate rules for students, married persons, renunciates, unmarried girls, widows, parents, teachers, rulers, and so on. In other words, the duties differ according to the nature and the status of a person.

Similarly,  because  different people having different qualifications, there are a variety of scriptures, deities, schools of philosophy, and various types of practices in India. Everyone has to walk from where they are standing.

To ward against the danger of an unqualified person receiving knowledge, knowledge was never written in the Vedic culture. It was normally transferred through the oral tradition only. That is why the Vedas are called shruti — that which is to be heard from a teacher. Writing books on leaves came into vogue much later.  The author of a book, who was usually also a teacher, would not share its contents with an unqualified person. Students were  made to take a vow not to further transfer the knowledge to undeserving candidates.

Here are three other examples of situations where everyone cannot be treated the same.

Most universities require students to take an entrance exam.  The university then admits only the qualified students.  A student follows a curriculum that is meant to present information is an order that maps with the student’s development.  The student doesn’t take a physics class that requires math that hasn’t been taught yet, nor does the student take an advanced physics course before taking an introductory physics course. In each course, the professor lectures according to the level of his audience.

A book of medicine may describe various types of remedies, but they are not applicable to each person. The doctor must diagnose the disease and  then find a corresponding medicine to treat it. For a single disease, there may be many medicines available, but each one is not suitable for every patient. For example, in Ayurveda, medicine is not only prescribed according to the disease, but also after due regard has been given to the body type, character, age, immunity, gender, etc. of the patient.

To give another example, in Bhagavat Purana, there are many instructions meant for renunciates. But if a householder tries to apply them to himself, he would be miserable. Similarly, there are separate instructions for the different paths of yoga, karma, jnana and bhakti. One should judiciously discriminate amongst them.

In Sanskrit literature, it is common for the author in the opening verses, to state four things, as instructed in the following verse:

The intent is to inform the would-be reader if the book is of interest to him/her (anubandhacastustaya). With books of today, some of these things are explained in an introduction, preface or prologue. Out of these, the adhikari, or the person’s eligibility, is the most important. One of the most basic qualifications to reading scripture is that the person must be interested in attaining the specific purpose described. If the person does not have this qualification, then he/she is not qualified to read it, and would find it almost impossible to comprehend its real meaning. 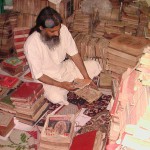 Unfortunately a number of people who are unqualified to read the scriptures not only study them, but critique them. These critics are, in turn, regarded as authorities by others. This practice has created a lot of negativity about Indian scriptures, philosophies and spiritual practices. One often hears remarks such as  “Hinduism is a big hodge-podge. It is a big mess. It is the religion of a million gods.” But this cannot be further from the truth. Another thing to be considered is that, in a philosophy book, everything that is written may not be the concluding principle, or siddhanta, meant to be established by the author. There is also purvapaksha, or the principle to be refuted, which may not be explicitly identified. Unqualified people or those of unripe discrimination who study such books without proper guidance, may mistake the purvapaksa for the siddhanta. Many misconceptions have arisen because of misinterpretation of scriptures.

To avoid such misconceptions, many times a warning is given against the reading of scripture by unqualified people. For example, Lord Krishna emphatically bars non-devotees from reading Bhagavad Gita:

“This  is not to be spoken to a person lacking control of his senses, to a person without true devotion, to a person who is unwilling to hear, or to one who envies me, thinking that I am material.”

The warning is both for the student as well as the teacher. If the teacher tries to teach an unqualified student,  it will be a futile endeavor.

“Just as by hundreds of attempts one cannot teach a crane to speak like a parrot, an unfit person can never be trained.”

My humble advice and request to anyone interested in studying any Indian scripture is to first see if one has the necessary qualifications.  One should not feel discouraged or despondent, however, if not yet eligible, but the importance of eligibility must be understood. Human beings have a special ability to change themselves. One’s eligibility is not rigid and can be acquired or improved.