Why Do We Criticize?

September 23, 2012Articles by Satyanarayana DasaComments Off on Why Do We Criticize?

By Satyanarayana Dasa: When two people meet and talk with each other, the talk is often about a third person. Not seldom that person is being criticized. The act of criticizing seems to be a great source of pleasure for us. Sometimes it can become such a habit that we are not even aware of it. Why do we spend so much time focusing in a negative way on others? 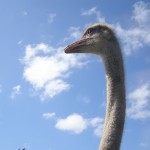 When two people meet and talk with each other, the talk is often about a third person. Not seldom that person is being criticized. The act of criticizing seems to be a great source of pleasure for us. Sometimes it can become such a habit that we are not even aware of it. Why do we spend so much time focusing in a negative way on others?

The main reason why we engage in criticism is material attachment, which we mistake to be love. It sounds paradoxical. When we love someone, we see no faults in our beloved. But when this so-called love (read material attachment) gets distorted, it can turn into anger, jealousy, hatred, envy, blame-game and criticism. Negative emotions are actually attachments turned upside down, as Krishna says in Bhagavad-gita (2.62), kamat krodho’bhijayate, “from intense attachment arises anger.” So attachment (love) and hatred are two sides of the same coin. Both are self or ego centered. In attachment or love, one moves towards the object of love and in hatred one moves away from it.

Sage Yajnavalkya says atmanah kamaya eva sarvam priyah bhavati, “everything appeals [positively or negatively] for the sake of self [ego].” Therefore, even when one criticizes someone, it is a manifestation of one’s attachment. Otherwise, why does one keep blaming or criticizing someone? It is as difficult to give up as the attachment to a person one loves. If one really does not like somebody one should just move away and have no thoughts about him or her, just as a person who sees the rotten body of a dead rabbit on the ground while walking in the forest quickly walks away. Criticism is a waste of time. It does not help us, nor the person being criticized. But we engage in it because it pleases our ego.

It is also seen that people have a tendency to believe in criticism of someone else without questioning it, but if someone is praised for something is it usually doubted. Praise challenges our ego, but criticism gives comfort to the ego.

Absorption in hatred is more intense

We become jealous of someone when we want to be like that person, but we are unable to. We like to have some power, quality, possession or position that person has. His position makes us feel uncomfortable. It minimizes our own position. The person is like a sand particle in our eyes. Our ego feels hurt and by criticizing or blaming, we try to prove to ourselves and others that that person is not what he passes for or what people think of him. This gives us a kind of satisfaction. Otherwise, out of jealousy, our heart will keep burning. Actually, it is none of our business what the other person does or possesses, yet we remain busy thinking or talking about him because of our negative attachment to the person. We cannot get him out of our head, just as we pleasantly think of a person we love. In fact, the absorption in the object of hatred is even more intense than in the person we love.

Criticism pronounced out of jealousy does not help the person being criticized and we also do not gain anything from it, but we lose a lot. We waste our valuable time and energy, the time and energy of the person we converse with and we pollute our mind. It is said that by praising oneself, one destroys one’s good quality and good karma, and by criticism one acquires the bad quality and bad karma of the person criticized. We create unwanted samskaras (subtle impressions) in our heart which will continue to trouble us. Therefore,Krishna advises against it.

One may argue that criticism helps others by correcting them. This is true if the criticism is  provided with that intention and not out of jealousy. But even then it depends on how the person being criticized takes your well-meant criticism. You cannot correct a person by blaming or criticizing, but only with love, compassion and honest communication. If you can correct someone by such criticism, it is wonderful. But that is very rare.

Criticism born out of jealousy is never constructive. It may be just fault-finding to assuage our ego. Furthermore, jealousy can breed jealousy. We bring out good or bad in others by our own behavior. Usually people react to criticism negatively. They become upset and defensive. Only a yogi can take criticism with an open mind and evaluate it. If he finds some truth in it, he will correct himself. Otherwise he will take it as a test of his equanimity. But such yogis are rare. Thus such criticism usually brings no good to anyone.

For example, in your home or at your office, someone is incorrigible and that irritates you. Your mother, your father, spouse, children, your boss or co-worker behaves offensively towards you. What do you do? You keep blaming him or her. By this incessant blaming you create a negative attitude towards that person and are unable to see any good in him or her. Your blaming is not going to give you anything positive in return. You may get a lot of problems instead. Your relationship turns sour. There will be tension when dealing with that person. Instead of blaming him, take this opportunity as an exercise  for you to maintain your equanimity; your inner balance. Be thankful to that person for giving you a chance to study your weaknesses and get over them.

Keep your balance and remain equipoised

When everybody praises you and treats you nicely you do not know where you stand. You may think that you are a very balanced person. But this doesn’t mean much. You will know your weak sides only when someone blames you for no reason. If you are able to keep your balance in such a situation, it means you have achieved something. You need such opportunities. Kabir, a great medieval Indian mystic, sadhu and poet says one should keep a critic next to oneself. This will keep one on one’s toes. One will be alert all the time. Therefore such a critic is a blessing in disguise. One should feel thankful to that person for doing such a thankless task. He is like a scavenger who cleanses the dirt for free.

Constructive criticism is like a rare gift. A famous Sanskrit proverb says that two types of people are rare in this world–one who speaks the bitter truth, and one who can listen to it and accept it.

It is impossible to not get blamed or criticized in one’s lifetime. Therefore, one should not be disturbed.

Remain steadfast and the trouble will pass by like a storm. And if you have to correct somebody, give constructive criticism with compassion. Criticism should go with compassion and care. That works. Otherwise it will not yield any positive result. Stand up to criticism, bow down to praise! Remain equipoised in both situations since both are disturbances on the spiritual journey.