Home  |  Vishuddha Sattva is not of this World

Vishuddha Sattva is not of this World

July 9, 2011Audio / Video SnippetsPhilosophyComments Off on Vishuddha Sattva is not of this World

One of the very important verses of Srimad Bhagavatam (4.3.23) speaks about the manifestation of the Lord:

Translation: The state of unalloyed being, vishuddha-sattva, is called vasudeva because the Personal God is unveiled therein. 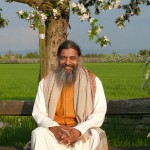 Pure sattva or vishuddha sattvam, is called vasudeva. In it, the Lord becomes manifest. Therefore He is also called Vasudeva. Vasudeva is vishuddha sattva, completely free from impurities. Vishuddha sattva cannot be achieved through material sattva, although sometimes people think sattva in a purified state becomes visuddha sattva because it appears like that.

Material sattva is the means or cause for bringing what is beyond perception into the range of perception. By the same token, pure sattva is a particular function of the internal potency (cit-shakti) that allows us to perceive the otherwise imperceptible transcendental sphere.

Since vishuddha means pure, the implication is that there is pure and impure sattva. An adjective added to a noun distinguishes it from the rest of that class. If we take the term “red rose”, the noun “rose” distinguishes it from all other objects, while the adjective “red” distinguishes a particular rose from roses of other colours. Similarly the term vishuddha sattva suggests there is also ashuddha sattva, impure sattva. Since sattva is a guna of material nature some people think that if sattva is made very pure, it will become vishuddha sattva, and God will manifest in it.

Impersonalists or Advaita-vadis in particular understand it in this way. For them God is also within the three gunas. Only Brahman, which has no attributes and qualities, is beyond the three gunas. Bhagavan – whether Krishna, Rama or another avatara – is considered to be also within the gunas, even though in sattva guna. This is their understanding of visuddha sattva.

The sadhana of Advaita, yoga, or any of these paths is meant to increase sattva in one’s life. The idea is that by decreasing rajas and tamas, a person advances spiritually. This does not apply to the path of bhakti which is not dependant on the three gunas. Bhakti is supremely independent, but this is not known even in some Vaishnava sampradayas.

Increasing sattva is still helpful, since it gives the facility to understand, and it illuminates. In Sankhya it is said that sattva leads to light, while rajas and tamas cover a person. Krishna also explains that in Bhagavad Gita. Yet, if we want to become free from the gunas, we have to understand that sattva is also a conditioning. Krishna says, sukha-sangena badhnati jnana-sangena canagha (Gita 14.6): sattva binds to knowledge and happiness. Rajas gives misery, and tamas leads to ignorance. So even though sattva gives knowledge, it cannot make a person transcendental to itself.

Since the material gunas are constantly in flux, they can never be pure. Sattva cannot be completely isolated from rajas and tamas. Besides, material sattva is necessarily constituted of a portion of inertness. Therefore there cannot be pure sattva or vishuddha sattva in this material world.

As Krishna says in Bhagavad Gita,

There is no state of being (sattva), whether on earth or even amongst the gods in heaven, that is free from the three gunas born of material nature. (Gita 18.40)

When it is said, for instance, that cow’s milk is in sattva-guna, it means that sattva-guna is predominant. Moreover, this is a relative statement. If one consumes more milk than he is able to digest, or drinks stale milk, the result will be rajasika or tamasika. None of the gunas are found in a pure state anywhere in the material world.

It is not possible to find only sattva or only rajas or only tamas anywhere. They are always mixed with each other and thus they are said to be mutually dependent. (Devi-bhagavata Purana 3.8.14)

In the same way material happiness, which is the result of sattva guna, can also not be pure. It is always mixed with misery to some extent. Pure happiness is ananda, which is not to be found in this material world. It is the Lord’s own energy.

Our senses are material and can only perceive matter. Therefore they are able to perceive sattva, but they cannot perceive vishuddha sattva which is identical to Krishna’s essential nature, since it is the agency through which the Lord’s form becomes manifest. Vishuddha sattva is also a name for the cit– or antaranga shakti of the Lord, which means bhakti. So it is a synonym for bhakti because the Lord manifests only in bhakti. When one’s heart is imbued with this energy one can have an inspiration of the Lord’s form in the heart.