The Two Divisions of Pure Bhakti – 2

September 10, 2014Articles by Satyanarayana DasaBhaktiShastraComments Off on The Two Divisions of Pure Bhakti – 2

Vaidhī, Rāgānugā and Svābhāvika Bhakti: The natural function (svābhāvika vṛtti) of the senses in relationship to bhakti is of two types. The first occurs, when a person follows the injunctions of scriptures to approach a spiritual teacher, takes instructions from that teacher, and thereby practices pure devotion. By regularly practicing devotion he or she moves to the stages of niṣṭhā, ruci and āsakti, in which his or her senses become naturally devoted to the Lord, very much like how common people have a natural attraction for their spouse, children, etc. This function is an outcome of vaidhī bhakti.

The natural function (svābhāvika vṛtti) of the senses in relationship to bhakti is of two types. The first occurs, when a person follows the injunctions of scriptures to approach a spiritual teacher, takes instructions from that teacher, and thereby practices pure devotion. By regularly practicing devotion he or she moves to the stages of niṣṭhā, ruci and āsakti, in which his or her senses become naturally devoted to the Lord, very much like how common people have a natural attraction for their spouse, children, etc. This function is an outcome of vaidhī bhakti.

The second type occurs when a person, because of a very special saṁskāra, attained by the grace of a great devotee either in the present or the past life, naturally engages his or her senses in the devotional activities described in the bhakti literature after hearing instructions from a spiritual teacher or even before that. Without depending on any scriptural injunction, such devotional activities are considered svābhāvika or natural in a much fuller sense.

The first type of bhakti is called vaidhī bhakti; the second, rāgānuga bhakti. Bhakti generally can be superior either in quality or in quantity. Quantity here means that if one engages more in this kind of bhakti, either in time or intensity, then it is superior to bhakti performed less intensely or with less time devoted to it. The other yardstick of superiority is by class. For example, by class, gold is superior to iron. One gram of gold is superior to one gram of iron. By quantity, 100 grams of gold are superior and more valuable than 10 grams, while in class, there is no difference between the two. In the same way, rāgānugā bhakti is superior to vaidhī bhakti by class. Vaidhī bhakti is considered to be superior only by quantity. However, within vaidhī and rāgānugā, superiority is measured by quantity.

So Verses 39-42 illustrate the distinction between the two types. The gist is that vaidhī-bhakti has its inspiration from hearing the orders of scripture impelling one to engage in bhakti. When the inspiration is not dependent on any injunctions of scriptures, but flows only because of a liking for devotion, it is called rāgānuga. Since the inspiration for such devotion flows from the very nature of the person, Śrī Viśvanātha Cakravartī Ṭhākura calls it svābhāvikī (“natural”). Vaidhī-bhakti is not natural to the practitioner, and therefore Cakravartīpāda calls it asvābhāvikī (“not natural”). However, he notes that when this bhakti reaches the stage of bhāva, is no longer inspired by scriptural injunctions and becomes the very nature of a devotee, then it is also called svābhāvikī.

Although it is natural at the stage of bhāva, it is still not rāgānuga-bhakti. There should be no misunderstanding that vaidhī bhakti naturally leads to rāgānuga bhakti. It should be clearly understood that there are two types of svābhāvikī bhakti – one is the perfected stage of vaidhī bhakti and the other is rāgānuga bhakti, which is natural from the beginning. The second, rāgānuga, is qualitatively superior, just as gold is superior to iron.

The example for svābhāvikī bhakti is verse 3.25.38:

“O my mother, the enjoyment of My devotees and My abode is never destroyed. My wheel of time does not afflict those devotees for whom I am their lover, the ātmā, son, friend, elder, companion or worshipable deity.”

This exemplifies svābhāvikī bhakti because it shows bhakti that is motivated by a natural sense of personal relationship with Kṛṣṇa.

Bhakti that does not arise naturally, asvābhāvikī bhakti, is inferior in every way to both svābhāvikī-vaidhī and svābhāvikī-rāgānugā. But it is still counted as bhakti because it shares the essential quality of being without ulterior motive. SB 3.25.39 and 40 demonstrate this by illustrating the case of devotees who have given up all ulterior interests in favor of serving Kṛṣṇa:

“I carry beyond the cycle of birth and death those devotees who have given up all attachment to their wife, children, wealth, animals, house and other such possessions, as well as attachment to pleasures in the next world, and who worship Me in everything.”

Any type of pure bhakti grants liberation as a side-effect. SB 3.25.33 states this, beginning with the word jarayati. This bhakti consumes and destroys (jarayati) the subtle body (kośa). But, the liberation attained by bhakti is different from that attained through jñāna. The analogy of food being digested by the digestive fire illustrates this. Digestive fire destroys the useless parts of food, but preserves the rest for the nourishment of the body. In the same way, bhakti’s liberation destroys useless things like material sense objects, material senses, and the material sense of doership, but it preserves things related to Bhagavān, such as His name.

The śruti statement, “[I am] the eye of the eye and the ear or the ear.” (Bṛhad-āraṇyaka 4.4.8) confirms that in perfect liberation, only the nonessential material form of the sense is destroyed, while a deeper, spiritually useful form of the sense remains. It is these spiritual senses that constitute the body of perfected devotees. Scripture confirms that the bodies of perfected devotees are free from material components. For example, 7.1.34 (35 in some editions) of the Śrīmad Bhāgavatam:

“The residents of Vaikuṇṭha have no (material) body, senses, or life air. Please explain how they could become bound to the limitations of a (material) body.”

This verse states that the perfected devotees who reside in Vaikuṇṭha are devoid of a body, senses or life air. This means that they don’t have a material body, senses and life air.

Devotees attain this liberation from the material body effortlessly. Just as digestive fire consumes food without requiring conscious effort, a devotee does not know how his material body, mind, senses, etc. are consumed by devotion — it happens effortlessly. Bhakti effortlessly liberates a devotee who is regularly engaged relishing the sweetness of devotional activities such as kīrtana, and thus even the devotee has no awareness of how he has become liberated.

As it is said in Śrīmad Bhāgavatam 10.2.30: A person walking on a footpath does not make any conscious effort to cross over the water contained in the hoof print of a cow. In the same way, the devotees cross over the ocean of the material world even without the effort to acquire the three stages of brahma-jñāna.

It is said in Muṇḍaka Upaniṣad 3.2.3: “Bhagavān cannot be attained by giving eloquent speeches, nor by good intellect or by profuse study of śāstra. Only one who is graced by Him can attain Him. To him, this Bhagavān reveals His own self.” This “grace” is bhakti. One who attains pure bhakti effortlessly attains what cannot otherwise be attained by the greatest of efforts.

As it is said in Śvetāśvatara Upaniṣad, “Only by realizing Him, one goes beyond death.” (3.8). In this statement the word “eva” (only) signifies that one attains liberation only by realizing Bhagavān’s sweetness and grace.

One cannot realize the Lord by knowledge alone. The grace of bhakti is an absolute requirement. The following statements of śruti and smṛti demonstrate this:

“Words and thoughts, unable to grasp Him, return to themselves.” (Taittirīya Upaniṣad 2.4.1)

Another implication of the analogy of digestive fire is that the liberation granted by bhakti destroys the useless liberation of absolute identity between an individual and Brahman — which is useless due to its ruining the opportunity for loving relationships with the Lord. Bhakti bestows only the forms of liberation that nourish the opportunities for further bhakti.

A further implication of this analogy is that digestion begins from the very first moment of eating, yet it takes nine to twelve hours to fully complete. In the same way, devotional service begins to destroy the grief and delusion of the material world from the very outset, yet complete liberation from these things happens in due course of time. Therefore, although the grief and delusion of the devotees are not removed completely in the initial stage of practice, one should not say that devotees are bound to the material world. Their complete emancipation is only a matter of time.

Thus Śrī Kapila defines bhakti as activities of the senses in relationship to Bhagavān, with no motive other than pleasing Him, and without being obscured by non-essential activities suited to the pursuit of jñāna or karma, executed according to the injunctions stated in the bhakti literature by a person who has accepted a mantra from a spiritual teacher.
This bhakti has two divisions, vaidhī and rāgānuga bhakti. In the beginning, as sādhana, vaidhī bhakti lacks in intensity and is asvābhāvikī — practiced externally, without natural inclination to it. When this practice attains successful maturity, however, it becomes natural ( svābhāvikī) at the perfect stage (sadhya) as vaidhī-bhāva-bhakti.

From this explanation of Viśvanātha Cakravartī Ṭhākura, it is very clear that vaidhī bhakti and rāgānuga bhakti are two separate classes of bhakti from their very inception, and they continue to remain separate even in their mature state. Confusion arises because vaidhī bhakti does lead to a svābhāvikī bhakti which has something in common with rāgānuga bhakti — natural inclination. However, practice of vaidhī bhakti does not automatically lead to rāgānuga bhakti. The seeds of vaidhī and rāgānuga are separate and yield separate results. Although the same terminology is used for both of them, namely sādhana bhakti, bhāva bhakti and prema bhakti, one must know that these three divisions of bhakti relating to vaidhī and rāgānuga are completely distinct. This is very clearly stated in Bhakti-rasāmṛta-sindhu 1.2.1 and 1.2.5-6. 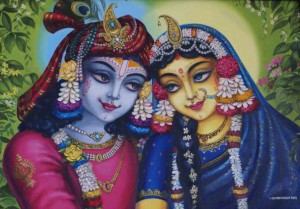