The Playful God beyond God – Part 1

July 17, 2015Gaudiya PhilosophyQuestions & AnswersComments Off on The Playful God beyond God – Part 1

Question: Allow me to share my reservations about the Playful God. I understand the psychology of wanting to serve the one you adore, but only when service is needed does it make any sense. All my research tells me that service rendered by evolved spirits in the afterlife is one of the keys to their further spiritual growth, even spiritual joy, but that their service is rendered to those needing help—not to Bhagavan or fellow souls equally evolved, but those on the way up, perhaps all the way down to a material planet like ours.

Answer: Why do you think so? Have you ever experienced being devoid of desires? How do you know the mind of such people? Why should such people follow your psychology?

Please also do some research about people who are beyond any attachment to the material world. Perhaps you never thought such people also exist.

Question: I found your explanation fascinating, however, and entirely consistent with Krishna’s love play elsewhere. But I have reservations about a God whose only activity is play. The God I love is certainly joyous, but also compassionate and capable of disappointment and even suffering, entailed by the sight of worlds (like ours) gone awry.

Answer: Gods are not many. So you cannot say, “The God I love”, as if I love a different God. Can you give some proof of the last part of your sentence?  And if your God is compassionate why can he not remove the suffering of humanity completely.

Question: When I speak of “my God” I don’t mean that there are two or more gods; I’m referring to the various views of God in the marketplace. We agree that there can be only one Supreme Absolute, and much of what you claim for Krishna, especially His personhood, I completely endorse.

However, a God whose svarupa makes him exclusively playful seems to me unserious and ethically suspect.

Answer: You have a raised a relevant doubt about Bhagavan being just busy playing. Actually we all like to do that and you may wonder from where that tendency originates.

So let us face that the world is full of suffering. Why is that?  There are the following possibilities:

You will agree God is none of these. The reality is that He is not responsible for the suffering of people. People suffer because of their own wrong deeds. There is a law of karma and everyone is the architect of his/her destiny. God does not interfere with this. Just as a state may punish a criminal, but not a law-abiding citizen. There are plenty of people in prisons, and you cannot blame police, the courts, or the state for that.  Police, courts, and the state are there to serve people, to maintain peace in society, and not to make people suffer. The state is neither cruel, nor impotent to release people from prison, nor ignorant about the suffering of people in prison. Yet, the state does not interfere. Nobody blames the state for that. The situation of people in the world is like that.

God wants to help people. There are two ways to help. One is give people what they want. Give them money, wealth. The other is to educate them. The first type of help is not help in the real sense. There are plenty of people in the world who have wealth and health and still they are not happy.  The real cause of suffering is ignorance. Ignorance about ourselves and about God. Ultimately the only cause of suffering is lack of love. Our greatest need is love, not wealth. Wealth coupled with ignorance is a curse. Love is the panacea of all problems. Therefore, He comes Himself or sends His messenger to teach love to people. God is the personification of love.

Another point is that God is not a product of someone’s rationality. So please do not try to fit God into a box of rationality. God is not irrational but also not limited by anyone’s rationality. He is trans-rational. Therefore, Vedanta-sutra (2.1.11) says tarko’pratsthanat. We should try to understand God and not think that He should adhere to my rational thinking.  God is already there. He is not going to change. Reality cannot adjust to our rationality. Reality is to be accepted. Rationality is very good but has its limitations.

So what Vedanta says, what Bhagavat Purana says, is description of reality according to Jiva Gosvami. We have no experience of transcendental love. Thus it is not easy to grasp Krishna who is love personified.

A further point is that Krishna has two aspects, Bhagavan and Paramatma. Paramatma is what we call God. Krishna is beyond God. It may be shocking to hear that He is not God. The religions of this world speak about God but not about Bhagavan. To give a crude example, God is like Obama in office and Bhagavan is like Obama on vacation with his family and friends. Obama cannot have two bodies but can have two moods. God has two separate forms as Paramatma and Bhagavan, and yet He is one. 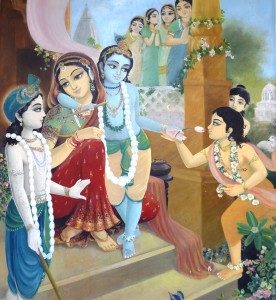 The dynamics of love are beyond the rational mind. There are two ways that one can serve someone and someone can get served. The first is to gain something and to receive something. This is seen here in our lives. We serve others because we want something, and others require it. The other way is when one has gained something. When one has attained the bliss of love, then one acts out of love. Devotees do not serve Krishna to fulfill any need but just out of love.

Then there is another level. When there is intense love in the heart of the devotees to serve Krishna, then Krishna become needy. When they want to feed Him, He becomes hungry. But this is not material hunger. This is spiritual hunger. Hunger for love. So actually Krishna is perfect and complete, but yet He is hungry for love. Thus the devotees serve Him out of love and He serves them out of love. So it is all a love play. That same dynamics exists among the devotees.