Question: Does Yashoda know that Krishna is God?

Answer: There is no need for her to know it. There is stage of consciousness in which someone is not interested to know it. The first stage is to know God, and the need love of Him, but at a more advanced level God isn’t anymore God for you.

Question: Does Yashoda know that Krishna is God?

Answer: There is no need for her to know it. There is stage of consciousness in which someone is not interested to know it. The first stage is to know God and to be aware of the need to love Him, but at a more advanced level God isn’t anymore God for you. He becomes more lovable. If you know that God is God, you always have some kind of fear and respect for Him, but if you don’t know about his godliness the relationship with Him is more intimate, and even God Himself prefers this.

Question: Did Kamsa attain sayujya [oneness with the Lord or merging into his body] (SB 7.1.31) as in the tika of Visvanath or sarupya [same form as the Lord] (SB 10.44.39) as said within the sloka?

Answer: Both are mentioned, as you have stated. I would say that he first got sayujya and then sarupya, as is evident from the instance of Sishupala. Sometimes it happens that an asura who is killed by Krishna enters into His body (bhagavat sayujya), but later he is taken out and given sarupya mukti.

Question: Why do we see so much opulence and luxury in the descriptions of Vraja in Govinda Lilamrita and Krishna Bhavanamrita – palaces, jewels, gold, etc.

Anwer: To attract the minds of the people and to establish the transcendental nature of the place. If the foundation of aisvarya is not there, the mAdhurya may seem mundane.

Question: So a mAdhurya sAdhaka can ignore such descriptions? 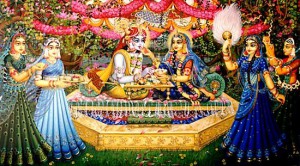 Question: About the word avatara Sri Haridas Shastriji says that when it is said, “Krishna descended from so far away”, it is just to encourage the bhaktas. Does that refer to the supposed distances He crossed from the spiritual sky, or to the fact that Krishna is just here all the time anyway, but not manifest to us because of the working of Yogamaya (yogamaya samAvRta, B Gita 7.25)? I think of BG 4.6-8, where it is nowhere said that He comes down, but that He appears instead, sambhavamyatma mayaya and tad atmanam srjamyaham. I also notice in the Sanskrit dictionary that 2 out of 3 meanings of the word avatAra is actually ‘appearance’ and not ‘descent’. Should we see Krishna’s avatara as a manifestation of Him who is already here in this world, or does He really come down like a rocket capsule descending from the sky?

Answer: Event though the word avatara means descent, this descent is not from a higher, physical plane. It means becoming manifest to the eyes of people who are otherwise not qualified to perceive His existence. Krishna is omnipresent but not manifest. When He wants to have avatara then He desires sarve mam pasyantu (let everyone see Me). This is called avatara.