Home  |  Other Religions in View of the Bhāgavata

Other Religions in View of the Bhāgavata

QUESTION: I am wondering if you are able to shed any light on Jīva Gosvāmī’s (or any other important pre-colonial Gauḍīya Vaiṣṇava author) views on non-Vedically aligned traditions, such as those of Buddhism, Christianity, Islam, etc.

QUESTION: I am wondering if you are able to shed any light on Jīva Gosvāmī’s (or any other important pre-colonial Gauḍīya Vaiṣṇava author) views on non-Vedically aligned traditions, such as those of Buddhism, Christianity, Islam, etc.

I am interested in how other religions were dealt within the writings of earlier Gauḍīya authors such as Jīva Gosvāmī. I am interested in seeing how this compares with the approach to other religions adopted by later authors such as Bhaktivinoda, who attempts to accommodate religions such as Christianity and Islam within a broad Gauḍīya framework, suggesting, in some places (e.g. Kṛṣṇa-saṁhita), that they can be seen as expressions of rasas such as sakhya and vatsalya. 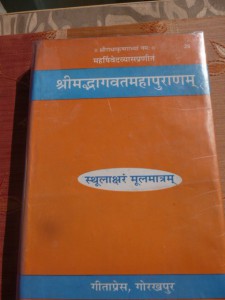 ANSWER: To answer your question, let me say that Jīva Gosvāmī is very clear from the onset in Tattva Sandarbha. In his epistemological portion, he very explicitly establishes Śrīmad Bhāgavata as the supreme authority for understanding the Absolute Reality, tattva. In the very beginning of his book, he analyses the essential message of the Bhāgavata in a very methodical manner. He makes it very clear that only those explanations that match the fundamental concept of the Bhāgavata are acceptable. Everything else is not acceptable. He does not even accept those explanations of Śrīdhara Swami that do not match the Bhāgavata. Some neo-Gauḍīyas have criticized him for that, of course without giving much thought to his statements.

Therefore, as far as I understand, Jīva Gosvāmī has no such inclusive or pluralistic tendency. Rather, his synthesis is that the real purpose of all the Vedas, Purāṇas, Tantra etc. is only in priti for Bhagāvan, which is the heart of Śrīmad Bhāgavata. This he writes in Sarva-samvādini on Bhagavat Sandarbha. In Bhagavat Sandarbha (Anuccheda 98), he shows that directly or indirectly all the Vedas are speaking about Krishna. Thus his inclusiveness is not to accept anything that flouts the principle of Śrīmad Bhāgavata.

From this, it is understood that precolonial Gauḍīya Vaiṣṇavas, such as Jīva Gosvāmī and later Śrī Viśvanātha Cakravartī and Śrī Baladeva Vidyābhūṣana, would accept only those religions or part of the teachings of these religions that propagate pure love of God. Anything which does not fit under this umbrella of love is not acceptable, be it heaven or liberation.

QUESTION: It may seem that Indic traditions have throughout the centuries displayed pervasive inclusivistic tendencies, i.e. subsuming and hierarching other traditions within their own frameworks (we might see the Gauḍīya acceptance of Brahman realization as valid but incomplete as an instance of this). This appears to have been restricted to the Indic religious fold. I would imagine that Bhaktivinoda’s universalizing inclusivism, i.e. the attempt to accommodate non-Indic traditions, is something new within the tradition? Though, at the same time, we do see in some pre-modern Gauḍīya writing, some validity being ascribed to Islam (e.g. Caitanya’s conversation with the Sufi Pir in Caitanya-caritāmṛta 2.18).

ANSWER: Here I would like to say that SB (1.2.11) clearly says that tattva is only one. That one tattva includes everything in it. Nothing can exist outside of it, whether Advaitavāda, Buddhism, Islam or Christianity. Even asuras are part of God.  Brahman is one part of it. So Gauḍīya’s accept Brahman on the authority of the Bhāgavata. But it must be noted that the Brahman of the Bhāgavata and the Brahman of radical Advaitavada are not the same. Therefore Jīva Gosvāmī makes great effort to refute Advaitavāda, and not include it within the fold of Gauḍīya Vaiṣṇavism. The same is true with Buddhism. He makes no effort to accept Buddhism. He says we accept Buddha but not Buddhism. That is on the authority of śāstra. So Reality is one but it is not the way it has been presented by Advaitvāda or Buddhists or others. Others are partly true. We accept what matches with the Bhāgavata and reject the rest.

Śrī Caitanya did not validate Islam. He converted the Muslims to Vaiṣṇava dharma. If they had continued to disbelieve in the form of God, then He would not have accepted them. So inclusion is on the terms of Śrīmad Bhāgavata, not otherwise.

QUESTION: On a related note, it appears that essential to Bhaktivinoda’s universalizing strategy is his framing of Vaiṣṇavism as “jaiva-dharma,” i.e. the essential nature or religion of the self.  Other religious modes, on this view, can be seen as expressions, however limited, of this innate religion. Some prominent Indologists suggest that this conceptualization of dharma as “essential nature” is a nineteenth-century phenomenon. In your study of Jīva Gosvāmī, do you find anything akin to this notion of Vaiṣṇavism as the innate or essential nature of the self (jaiva-dharma), or would you agree that this is a modern innovation within the tradition?

ANSWER: I have already stated above that according to Śrīmad Bhāgavata, there is only one tattva. Jaiva dharma is prīti for that tattva. This is clearly stated in Prīti Sandarbha. In Tattva Sandarbha, Jīva Gosvāmī speaks about sambandha, abhidheya and prayojana. This applies to everybody, not only to Indians or Bengalis. He clearly writes that the only independent process is bhakti. No other process works without bhakti. Nobody can attain perfection without bhakti. Bhakti is the real jaiva dharma. Śrī Jīva Gosvāmī writes that the basic disease of a conditioned living being is beginningless absence of awareness of God, and the only solution to this is awareness of God, which is bhakti. Kṛṣṇa also makes it very clear in Bhagavad Gītā that no one can become free from bondage to His māyā without taking to bhakti and the purpose of all the Vedas is to teach this message.