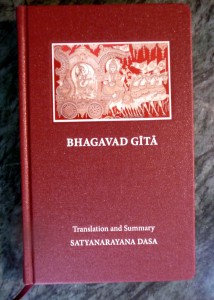 On the auspicious day of Gītā Jayanti (Appearance of Bhagavad Gītā), Jiva Institute has released a new high quality edition of Bhagavad Gītā with chapter summeries and anvaya, translated by  Babaji Satyanaryana Dasa. This new “Bhagavad Gītā – Sāra-samanvitā” comes with a slip case, is bound in buckram fabric with a specially embossed cover picture, has two color print and round edges. It can now be ordered from our Online Store.

The following are excerpts from the introduction and front matter:

Bhagavad Gītā is an ancient text that was spoken by Bhagavān Śrī Kṛṣṇa to His friend Arjuna more than 5000 years ago. They both belonged to a society that adhered to the principles of varṇāśrama-dharma, a system based on social duties prescribed by the Vedas and Smṛtis.

Bhagavad Gītā is not an independent book. It forms a small part of Mahābhārata, the greatest epic of the world. The latter was written by sage Veda Vyāsa primarily for people who were considered ineligible to study the Vedas. To study the Vedas in former times it was a requirement that one had to belong to the first three social classes (the brāhmaṇas, kṣatriyas, and vaiśyas) of the varṇāśrama society. Mahābhārata contains the same essential knowledge as found in the Vedas but in a simplified manner through the use of elaborate stories. It narrates the history of the famous dynasties of India. There were two major dynasties, namely, the Sun dynasty and the Moon dynasty. In Bhagavad Gītā, the focus is on two groups of cousins, the Kauravas and Pāṇḍavas, who appeared in the Moon dynasty.

Bhagavad Gītā has eighteen chapters, and each is designated as a type of yoga. The word yoga has many different meanings. In the Gītā it is used principally in the sense of the means undertaken to accomplish or to be united with one’s goal. Therefore, the word yoga can also be translated as “path,” as has been done here especially in the chapter titles. There are primarily three different types of yoga, namely, karma-yoga, jñāna-yoga, and bhakti-yoga. When we employ karma, or selfless action, for uniting with or reaching our goal, it is called karma-yoga. Similarly, when we cultivate jñāna, or the intuitive insight of our conscious identity with the Absolute, it is called jñāna-yoga. When bhakti, or devotion, is adopted as the means of attaining unity in love, it is called bhakti-yoga. In the case of the latter, bhakti is not only the means but also the goal.

The eighteen chapters of the Gītā can be grouped into three sets of six chapters each. The first set focuses predominantly on karma-yoga, the second set on bhakti-yoga, and the third on jñāna-yoga. But to some extent all three topics can be found throughout all the chapters. The first chapter is introductory and doesn’t outline any specific yoga. It is titled “The Path through Despondency” (Viṣāda-yoga) because it describes Arjuna’s dejected mental-emotional state after he surveys the armies on the Battlefield of Kurukṣetra. It can be considered as a yoga, or transformational means, only in the sense that dejection itself, when it leads to self-inquiry, becomes the basis of authentic practice. In the state of dejection, one’s ordinary absorption in materialistic pursuits is slackened, and thus deliberation on God becomes a distinct possibility.

In Chapter 2, the main topic is sāṅkhya-yoga, a type of analytic jñāna-yoga. This chapter is interspersed with instructions on karma-yoga. Chapter 3 deals mainly with karma-yoga. Chapter 4 describes karma-yoga culminating in jñāna-yoga, and Chapter 5 explains how the end result of karma-yoga and jñāna-yoga is the same; thus, the wise person sees no difference between them.

Chapter 6 mainly delineates dhyāna-yoga, popularly known as rāja-yoga, although there is also some description of karma-yoga in the beginning. Dhyāna-yoga, which can be subsumed under jñāna-yoga, is the yoga of meditation. In Bhagavad Gītā, both karma-yoga and jñāna-yoga are described as combined with bhakti-yoga. This is a special feature of the Gītā, that it describes every yoga as interpenetrated by bhakti-yoga. Thus, the first six chapters of the Gītā focus more on karma-yoga.

The second six chapters offer an elaborate exposition of bhakti-yoga. In Chapter 7, Kṛṣṇa explains that He is the source of the cosmos and that everything manifests from Him. Those who surrender to Him can transcend the bondage of the material world. Consequently, a person who is truly wise takes shelter of Him, knowing that everything is a manifestation of Him. In Chapter 8, Kṛṣṇa explains the process of attaining liberation through meditation on His sound representation in the form of Oṁ. He also speaks of the path of darkness, which leads to heaven, and the path of light, which culminates in liberation.

In Chapter 9, He resumes the topic of His manifestation in the material cosmos, which He began in Chapter 7. He concludes the chapter with the recommendation to adhere to the path of bhakti. In Chapter 10, He describes the process of meditation on the phenomenal objects of His majesty as manifest in the universe. In Chapter 11, there is the account of Kṛṣṇa’s revelation of His cosmic form to Arjuna. Chapter 12 is spoken in response to Arjuna’s question as to which form of meditation is superior— on the unqualified Absolute or on the Absolute qualified by form. From this starting point, Kṛṣṇa goes on to explain the process of bhakti and describes the characteristics of His devotees.

In the last group of six chapters it is predominantly jñāna-yoga that is described. Chapter 13 defines the psycho-somatic organism as a field (kṣetra) and consciousness as the knower of the field (kṣetrajña). Kṛṣṇa also explains that He is the real knower of all fields whatsoever, and that everything in this material world is the combination of matter and consciousness. Chapter 14 describes the three guṇas of primordial nature. Chapter 15 describes the Supreme Person in His feature of immanence. Chapter 16 describes both the divine and ungodly attributes that are born of conditional nature. Chapter 17 explains the three divisions of faith, food, sacrifice (yajña), charity, and penance, all in accordance with the guṇas of nature. In Chapter 18, the final chapter, Śrī Kṛṣṇa provides a summary and the final conclusion of His teachings. Although this chapter refers to all three yogas, it ends with a strong recommendation in favor of bhakti-yoga. 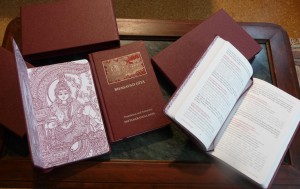 In translating Sanskrit works of poetry or verse into their prose form, the traditional system employed was to first rearrange the words of a verse into their proper syntactical order, which would necessarily be different from the sequential order of the words composing the verse. This syntactical reconstruction is known as anvaya. In the grammatical lexicon, A Dictionary of Sanskrit Grammar, anvaya is defined as follows: “the arrangement of words according to their mutual relationship based upon the sense conveyed by them (śabdānāṁ parasparam arthānugamanam).” Monier Williams gives it as, “the natural order or connection of words in a sentence; syntax.” From this it is clear that anvaya is meant to convey something more than individual sequential word meaning, which is simply not designed to show the syntactical connection between the words. In reality, it is the sentence as an indivisible whole that conveys meaning, and, hence, the precise sense of the words that make up that sentence really only emerges through careful analysis of their mutual relations. Taking all of this into consideration, we have followed the traditional system for representing the anvaya, in accordance with sentence syntax and not according to the sequence of the words as they appear in a verse.