Mukti for a Bhakta 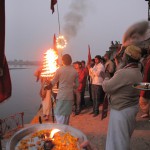 Question: I have a question about mukti and would like your help in understanding this.

We hear about 5 types of mukti (below) described in Srimad Bhagavatam. Which type is for our line? Is it the combination of all 4 types except for sayujya or is there one specific type for us?

It is also said that the devotees are not interested in mukti, they are only interested in loving seva, but still I think Krishna has to award one of these types, and I was wondering which type of mukti as given below would be appropriate:

Sālokya – living on the same planet

Sārūpya – having the same bodily features

Sāmīpya – to be a personal associate

sārṣṭi – having the same opulence

Answer: The goal of a devotee is not to attain mukti but to attain bhakti. However, mukti comes as a concomitant effect of bhakti. Just like if you buy incense, then the package in which the sticks are kept comes along with it, although your intention is not to get the package. When one becomes perfected on the path of bhakti, then one attains the position of an associate of Bhagavan and thus one gets salokya, which means residence on the same planet, sarupya, which means bodily features similar to Bhagavan, sarsthi (opulence similar to Him) and samipya (proximity). A devotee does not get sayujya because that is antagonistic to bhakti.

Destination of a Practicing Devotee before Perfection

Question: A devotee has taken diksa in the Gaudiya sampradaya but still has not attained the stage of attentive japa or doing lila smaranam in siddha deha before the end of his/her lifetime. What is the destination of that devotee?

Answer: It all depends on the awareness of the devotee. If the devotee is truly sincere and has full faith in one’s guru, then there is no more birth. Taking of birth or no birth does not depend so much on the intensity of japa or lila smaranam but on the sincerity of the devotee. If one has a qualified guru and one has fully surrendered to him or her, then there is no more birth. This is the import of Krsna’s statement in verse 18.66 of the Gita. But if one is not fully surrendered and one’s goal is not to attain mukti but pure bhakti, then one will be born again.

Question: Will such a devotee keep taking birth until that perfectional stage of doing attentive japa and success in raganuga bhakti is attained? Or will kripa, mercy, play a role and take care of everything based on sincerity? Is our path effort based? Or is it mercy based? Or both in equal proportions?

Answer: He will continue to take birth until he is fully surrendered. As far as the role of grace is concerned – yes, of course, ultimately everything depends on grace. However, from our point of view, we also have to make a sincere effort. Therefore Krsna instructs Arjuna to always remember Him and fight. (Gita 8.7)

Question: I recently had an experience where myself and another devotee got into an intense exchange which triggered some strong emotions.  After reflecting on the situation I could see that through the course of the conversation our emotional states had a big impact on what we could or could not understand from each other.  This made me think of the Bhagavad-Gita.  My question from this experience is, is there a correlation between what Krishna is teaching to Arjuna and Arjuna’s emotional state throughout the course of the Gita? Like, is what Krishna is teaching in one particular chapter vs. another based on more than just a philosophical progression but an emotional one as well?

Answer: A good teacher or preacher takes into consideration the emotions of his or her subject. This can be seen in Bhagavad Gita where Krsna begins to speak to Arjuna in the 2nd chapter, 2nd verse. He is not referring to a philosophical point but is only considering Arjuna’s mental state. Arjuna became emotional because his ego was mortified by identifying with the opponents as his relatives and people. People like Bhisma, who were part of Duryodhana’s army, had two types of identity in relationship to Arjuna. First they were his opponents and secondly, they are related to him, either by blood or education. When Arjuna saw them, he forgot the first identity and thought only of the second one. Thus he was overpowered by emotions about killing his own relatives and teachers. Krsna speaks two verses to get him out of this emotional state (Gita 2.1. and 2.2.) and remind him that as a warrior (ksatriya), he has come to fight with Duryodhana and his supporters. Similarly, when Arjuna first surrenders to Krsna, as described in verse 2.7, and then says that he will not fight in verse 2.9, Krsna’s first statement in verse 2.11 is to show the contradiction in Arjuna’s behavior, which manifested from the emotional state of his mind.

Similar types of statements, which are specifically related to Arjuna’s emotional states, can be seen in the remaining chapters of Bhagavad Gita.