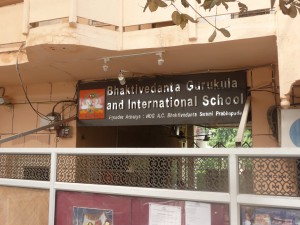 When I first joined Bhaktivedanta Swami Gurukula, Vrindavan in 1987 as a Sanskrit teacher, Kurma Rupa prabhu was the first faculty member who was introduced to me by Shri Dhanurdhara Swami, the Principal of the gurukula. We became friendly from our first meeting. Initially, I was only supposed to teach Sanskrit to the senior students, but I was also given the added responsibility to be the ashrama teacher of the senior-most batch of the students. Kurma Rupa Prabhu was ashrama teacher for the remaining students. Our common service also brought us closer together.

I had never been a teacher in my life, especially not an “ashrama” teacher – which meant disciplining the students. In fact, disciplining students is quite opposite to my nature. So, I observed how Kurma Rupa dealt with the children and from that, devised my own style to take care of my group of students.

Sometimes we used to take all the boys to Yamuna. One thing that people nowadays will not believe is that the place next to Radha Tila (near Krishna Balarama tree on the parikrama path) was empty and full of sand (Today this place is covered by tall buildings and no sand can be seen). We used to go there and play kabaddi, a traditional Indian game, in the sand. Maybe sometimes Krishna-Balarama also played that game here, because the word Ramana Reti means the sand on which Krishna played with His friends. In those days, Yamuna flowed close by this spot. 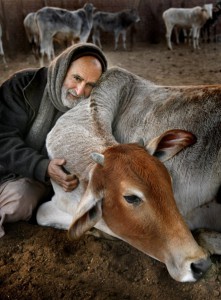 Kurma Rupa with his beloved cows

During the summer vacations, the gurukula was practically empty. Kurma Rupa and I were the only teachers who stayed. Besides teaching, I was studying. Actually, I was very obsessed with my studies. It is around that time that Kurma Rupa and another teacher named Anila asked me if I could read the Gita commentaries of Baladeva Vidyabhushana and Shri Visvanatha Cakravarti to them. At the time, my Sanskrit was not good enough to really read these commentaries, yet I tried anyway – reading and explaining the commentaries to them. Thus, besides teaching the gurukula students, teaching the gurukula teachers (who were mostly devotees) also became a regular part of my life.

Kurma Rupa was my most steady student from the very beginning. We were the only brahmacaris among the gurukula faculty, and we became very close friends and often used to talk together.

Later, I started teaching the Sat Sandarbhas of Jiva Gosvami to the gurukula teachers. At that time I was repeatedly asked to translate the Sandarbhas and comment upon them in writing. I personally never thought doing this, because I did not think that I was qualified for such a job, but I took up the task because of the requests of devotees like Kurma Rupa.

Kurma Rupa was my first editor. I had no computer, I would write by hand and he would type it into a computer and edit it. Then he would print it out and give it to me to check, adding to or modifying his edit. That is how the project began.

Later on, Kundali joined us. Kurma Rupa had met him in Thailand. Kundali had worked for Back To Godhead magazine, and then, after going astray from devotee association, went to Bangkok to teach English. Kurma Rupa knew Kundali, and when he met him in Bangkok, he told him about me and invited him to come to India. It was not easy to convince Kundali, but somehow he agreed. When Kurma Rupa returned, he told me that he has found a better editor for the Sandarbhas. Later, when Kundali arrived in Vrindavan, he stayed in the ISKCON Goshala, which is where Kurma Rupa first introduced us. Kundali began attending my classes on the Sandarbhas in the evening. I do not remember which Sandarbha I was teaching at that time, but I do remember that Kundali was very thrilled by my classes, and he thanked Kurma Rupa for inviting him to Vrindavan and work with me. This is how Kundali became my editor. With the help of Shri Dhanurdhara Swami I got him a room right next to me on the third floor of the gurukula building. 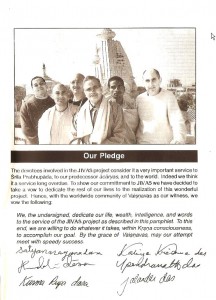 Kundali is an intellectual, and he really loved the Sandarbhas. It is he who came up with the idea of printing the Sandarbhas through the BBT. He wrote a proposal to Shri Harikesha Swami who was in charge of the Swedish BBT and was one of the most influential gurus and GBCs of the time. Kundali would travel to Europe in the summer and lecture on the Sandarbhas. There, he met Shri Harikesha Swami who was very impressed by the translation and commentary of Tattva Sandarbha and agreed to sponsor the project and later made a visit to Vrindavan to meet me.

It is at that time that Kurma Rupa, Kundali and I conceived of Jiva Institute of Vaishnava Studies. We printed a pamphlet delineating the aims and objectives of the Institute. By now we were a team of six devotees. Kurma Rupa and I had our regular gurukula service, but Kundali was free to work constantly on the Sandarbhas. We used to meet together, and we relished our association.

I liked Kurma Rupa prabhu’s simplicity, sincerity, truthfulness, and dedication to Prabhupada. Although personally he never met Prabhupada, his faith in Prabhupada was immovable. He was very averse to devotees who would behave in a duplicitous manner. Personally, I do not know anyone else who was as straight-forward and truthful as Kurma Rupa prabhu. He had no desire for name and fame; no intention to acquire any position in the society. It was a pleasure to be in his company.

He loved simplicity. I still remember him walking to the Yamuna wearing a gamcha and carrying a copper lota in his hand the way that sadhus would carry them:  The neck of lota was tied with a rope like a handle to hold it. He used to often go like that with the gurukula boys or sometimes just by himself. In those days, the Yamuna was not as polluted as it is now. One could still bathe in it and drink.

Later on, our whole project collapsed because of our stand on the position of the jiva, which was against the popular view of ISKCON. For that reason, I left ISKCON in 1996. Later Kurma Rupa also left Gurukula, being dissatisfied with the management. Kundali soon left Vrindavan to go the USA and I lost touch with him, but I remained in contact with Kurma Rupa Prabhu. 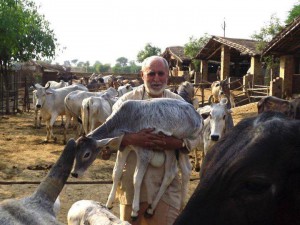 Kurma Rupa in his goshala

When I built my Institute in Sheetal Chaya and began giving classes, Kurma Rupa used to attend. We also used to meet once in a while. Sometimes I visited him and sometimes he came to see me. After leaving ISKCON, he first moved to the Madhuban colony, in Acyuta’s house. At that time some astrologer told him to feed cows, so he used to buy some chara (fodder) and give it to the cows wandering in the street outside his house. (Kurma Rupa had some interest in divination. While we were in the Gurukula, he and Kundali used to practice palmistry.) Sometimes I used to see him bring the chara in a sack on his bicycle. That is how his cow service began.

Later he got some place from Nata Bihari in Madhuban colony where he was keeping the cows. Gradually his cow service kept increasing. When he moved to Kiki Nagala he stopped regularly coming to see me, because it was little far away.

My Guru Maharaja was also dedicated to cow seva and, therefore, Kurma Rupa prabhu visited his goshala a few times. Later on, when his cow seva increased, my Guru Maharaja also heard about him and how nicely he was taking care of the cows. My Guru Maharaja expressed his desire to see Kurma Rupa. This was something very unusual for him and shows the greatness of Kurma Rupa’s service to cows. Kurma Rupa had seen Maharaja before, but now he came on Maharaja’s invitation, and Maharaja was very pleased to meet him. 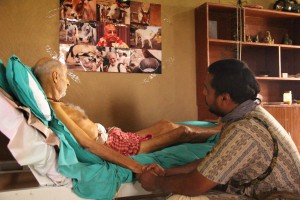 Whatever Kurma Rupa did, he did it with his whole being. He was fully immersed in cow service. It was not some ritual for him but his very life. Last year when he visited me at Jiva, we were talking about a popular verse about the love for cows: “Let the cows be in front of me and cows behind me. Let the cows be to my sides and let me live among the cows.” He had a very deep insight into this verse that I never thought of. He was speaking about the psychology of cows when they are in your front, on the back, or at the side. He has spent a lot of time observing cows from different positions. I was surprised to hear this. He said he was planning to write his experiences about it, but I don’t know if he ever found the time to do that.In May, while I was in Poland, I heard that Kurma Rupa was seriously sick. But later I heard that he was better. However, when I returned to Vrindavan on the 14th of June I came to know that he really was seriously ill. The next day, I visited him and was shocked to see how thin he was. But he was in good spirits. He sat up and we spoke for a long time about our old times, about Kundali, and about the Sandarbha project. We both knew that his time in his body was over. He told me that he had made arrangements for the cow service to continue. I left him with a heavy heart, but I was happy to see that he was very peaceful within and his mind was fixed on the holy name.

It is hard to believe that he is no more to be seen. Although after leaving ISKCON we both lived in separate places, somehow we still felt connected. Most people who came in contact with Kurma Rupa, later on, may not even know that we were good friends. 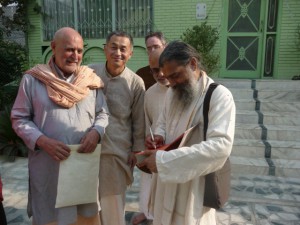 Kurma Rupa receiving a copy of Bhagavat Sandarbha from Babaji in November 2014.

Kurma Rupa on Dairy Consumption: Don’t be a Butcher-bandhu