Question: Karma is a complex process in evolution. At what point is the sadhaka, who has a sad-guru and is strictly following the process of bhajan, subjected to karma, and when is the karma nullified and the will of the Lord acting? 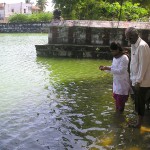 Question:  Karma is a complex process in evolution. At what point is the sadhaka, who has a sad-guru and is strictly following the process of bhajan, subjected to karma, and when is the karma nullified and the will of the Lord acting?

Question: Why should spiritualists avoid sex?

Answer: Everyone hankers for love, but it is misplaced. Out of ignorance atma identifies with the physical body, and then the need of atma for love becomes translated at the body level. However, on the bodily level this love cannot be fulfilled, it turns into sex. Even though there is an intense desire for sexual union, the physical act cannot give satisfaction because it does not touch the soul. It is only on the physical level and makes the bodily identification even stronger or intense. Therefore in spiritual societies there are restrictions about sex. One cannot enjoy sex unless one identifies with the physical body. Since we are trying to realize ourselves we try to avoid activities which put us into the illusion that we are this body. Sexual union puts one into complete illusion.

Question:  In Bhagavatam I read that as soon as a true representative of the Lord is met by a devotee of the Lord, the devotee is assured to go to Krishna’s abode just after leaving the present body. This however, depends on the sincerity of the devotee himself. What is the meaning of sincerity in this context?

Question: I’m wondering about the meaning of Om Mani Padme Hum. There is a bunch of stuff on the internet about how special it is within the Buddhist context, but is there a Vaishnava interpretation of the mantra? 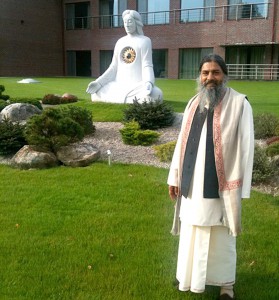 Answer: This mantra originally must come from Sanskrit, but in the present form it is not pure Sanskrit and thus it is hard to give the meaning.

Om is the essence of the vedic knowledge. It is also the primeval sound the source of creation. The three sounds a, u and m in Om signify various things, such as Brahma, Vishnu, Shiva; creation, maintenance and dissoultion, three states of life – wakeful, dream and deep sleep; Radha, Krishna and jiva, and so on.

Padme means in the lotus lower.

Hum is another primal sound or seed mantra.

So it menas, a jewel in the lotus flower. This can be interpreted according to one’s process. This mantra is supposed to be the essence of Buddha’s teachings.