The Status of Haribhakti Vilasa

Question: I have a few questions about the status of Haribhakti Vilasa. Was it written for both devotees and smartas?

Answer: It was written for Vaisnavas, but not specifically for Gaudiya Vaisnavas.

Question: For what time was it written? For a specific time or for eternity?

Answer: Not for any specific time. But everything is not for everybody. In fact there are things in it which we should not follow. So there is pAtra vicAra [consideration in regards to the qualification of the person].

Question: Was it written for India only or also for other varsas?

Answer: My understanding is that it was written for India. Therefore one should also do desha vicAra [consideration in regards to the place]. There are some rules which do not depend upon desha and kAla [time] i.e. observing Ekadashi vrata. But there are others which may change with desha, i.e. Caturmasya. The seasons in Netherland are not same as in India or say in Australia where it is just opposite of the Indian seasons.

Question:  Sri Haridas Shastriji says about the word avatara that when it is said that ‘Krishna descended from so far away’, it is just to encourage the bhaktas. Does that refer to the supposed distances He crossed from the spiritual sky or to the fact that Krishna is just here all the time anyway, but not manifest to us because of the working of Yogamaya (yogamaya samAvRta, Gita 7.25)? I think of BG 4.6-8, where it is nowhere said that he comes down, but that he appears instead. sambhavamyatma mayaya and tad atmanam srjamyaham. I also notice in the Sanskrit dictionary that 2 out of 3 meanings of the word avatAra is actually ‘appearance’ and not ‘descent’. Should we see Krishna’s avatara as a manifestation of Him who is already here in this world, or does He really come down like a rocket capsule descending from the sky?

Answer: Avatara, although it means descent, this descent is not from a higher, physical plane. It means becoming manifest to the eyes of people who are otherwise not qualified to perceive His existence. Krishna is omnipresent but not manifest. When He wants to have avatara then He desires sarve mam pasyantu (let everyone see Me). This is called avatara. 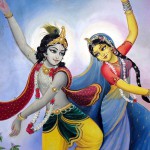 Question:  Are the ornaments which Krishna wears also spiritual? If so, where do they come from and do they always exist? Where can I read about it?

Answer: Read SB 6.8.32-33. It says that bhusana ayudha (His decorations and weapons, etc) are the Lord’s own potency, sva-maya. As He is eternal, so is His potency. SB 10.3.9 describes that Krishna was born with them, then they became unmanifest. This shows that bhusana etc can manifest and unmanifest as per lila [divine play] but they are ever with the Lord. How can His svarupa-sakti be seperated from Him?

Using all Senses in Krishna’s Service

Answer: There is one word Sri Gosvamipada uses – saksat, direct( saksad bhajan asambhavat). These cannot be used directly (except for gopis – gopinam kil saksadeva sampadyte). Other sadhakas or siddhas can use them indirectly for maintaining their bodies which are used in the service of Krishna. So where is the contradiction?