Govinda-līlāmṛta, composed by Śrīla Kṛṣṇadāsa Kavirāja Gosvāmī (author of Śrī Caitanya-caritāmṛta), is an important and unique piece of literature for the Gauḍīya Vaiṣṇava community. The author himself declares that the purpose of this work is to inspire devotees to contemplate the various pastimes … 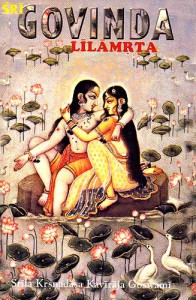 Govinda-līlāmṛta, composed by  Śrīla Kṛṣṇadāsa Kavirāja Gosvāmī (author of Śrī Caitanya-caritāmṛta),  is an important and unique piece of literature for the Gauḍīya Vaiṣṇava community. The author himself declares that the purpose of this work is to inspire devotees to contemplate the various pastimes of Rādha, Kṛṣṇa and Their associates in Vṛndāvan as they take place throughout the day.

“All glories to Śrī Govinda-līlāmṛta, the immortal nectar pastimes of Sri Govinda, that defeats the nectar of the demigods, or the desire for liberation, constantly bestow a wonderful thirst to the ears, words and mind whenever it is drunk, that cures the disease of material life, yet produces delusions and blindness of loving intoxication, and gives inexhaustible relish, even if it is consumed again and again, nourishing even the body.”

Nandimukhi says: And look! As Radha and the sakhis’ pleasure is synonymous, the sakhis are one with Radha. Krishna is like the moon for the ‘lilies of Vraja’ (the gopis), and Srimati Radhika is the essence of his pleasure potency. She is likened to a desire creeper of prema (prema-kalpa-lata) and the sakhis are the leaves, flowers and new buds on this creeper, and as such are non-different from her. So it isn’t surprising that when the Radha creeper is nourished by showers of Krishna’s lilamrita rasa, the leaves, flowers and buds naturally experience bliss a hundred times more than if they were splashed with this rasa themselves! (GLA 10.16)

Jagadananda Das (Jagat), Ph.D., Bhakti-śāstrī, will give daily classes on this work at Jiva Institute Vrindavan throughout the month of  Kārtika, starting from October 18th, at 10.00 am. Anyone coming to this course is advised to pick up a copy of the book. 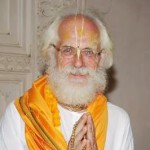 Jagadananda Das, a.k.a. Jan K. Brzezinksi, a.k.a. Hiranyagarbha Das (b. 1950), joined ISKCON in Toronto, Canada, in 1970 and was initiated by A.C. Bhaktivedanta Swami Prabhupada in 1971 in Detroit. In ISKCON he served in various capacities at ISKCON Press in Brooklyn and then at the Dallas Gurukula, where he taught Sanskrit, in New Vrindavan where he headed the Varnashram College experiment in 1974, and then as headmaster of the Mayapur Gurukula in India (1975-1979). In 1979, he took sannyāsa from Bhavananda Swami, taking the name Hiranyagarbha Swami.

In 1979, he joined the son and direct disciple of Srila Bhaktivinoda Thakur, Lalita Prasad Thakur (1879-1980) from whom he took dīkṣā, siddha-praṇāli and vairāgya (bābājī veṣa). He was given the name Jagadānanda Dās Bābājī. For the next five years he lived in the old town of Nabadwip and studied the literature of the sampradāya in the original languages and was given the title Bhakti-śāstrī by the Bhaktivinoda Goṣṭhī in 1982.

In 1985, he returned to Canada and took courses in comparative religious studies and the history of religions at McGill University, getting top honors. In 1988 he was awarded the Commonwealth Scholarship to study for his doctorate at the School of Oriental and African Studies, which had a special relationship with the Vrindavan Research Institute. In 1992 he was awarded a Ph.D. in Sanskrit Literature, the subject of which was the Gopāla-campū of Śrīla Jīva Goswāmī.