Continuation of a discussion following a seminar in Terre de Ciel:

Another one of God’s most important characteristics is that He has inconceivable power. Inconceivable refers to something that can’t be embraced by the mind’s intelligence. It is beyond our imagination or common logic. There are logical and illogical things, and there are trans-logical things. God transcends logic. He also acts in a logical manner but He isn’t bound by logic. He is logical and illogical, He exists in this universe but He is also beyond it. The universe exists in Him and He is inside the universe. For God only this is possible. Krishna says in Bhagavad-Gita, “I am in everything and everything is in Me, yet I am not in everything” (Gita 9.4). There is another story from Krishna’s childhood that demonstrates this. 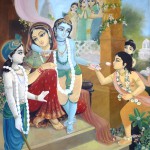 Yashoda with Krishna, Balarama and gopas

One day He was playing with other small children and He ate some clay, which children sometimes do. Seeing this, the other children went to Mother Yashoda to complain that Krishna was eating clay. She asked Him: “Is that true, did You eat clay?” “No mother!” He answered, “Why should I eat that? You always give me nice sweets, why I should eat this clay?” But the other children disagreed, saying, “He ate it! He ate it!” They wanted Him to be a little punished. So when she asked again, Krishna told His mother, “All of them are telling lies!” “Why is that?” Yashoda asked. Krishna replied, “Because any time I play with them I defeat them, so they are envious of Me and they want you to punish Me!” Krishna’s brother Balarama was also there, and he also said, “Mother, He was eating clay!” Being asked yet again, Krishna didn’t know what to say, so Yashoda told Him to open His mouth. He didn’t have any choice, so He opened His mouth and Yashoda looked inside, and what was there? The whole universe!

Here Krishna was indicating to Yashoda the meaning of the process of eating. We ingest something from outside which then becomes a part of our inside.

So Krishna means to say, “Everything is inside Me, so how can I eat? Look at these universes within Me! Where is the point whether I have eaten clay?”

Yashoda was amazed because inside the universe in Krishna’s mouth she saw the village in which she was living, and she saw her own house and herself standing next to Krishna looking inside of His mouth. And in that mouth, there was also the universe. In that universe she could also see herself with Krishna. There were unlimited universes like this. She was stunned and closed her eyes. Then she asked Krishna to close his mouth. So this pastime shows that everything is inside God and at the same time God is inside of everything. Yet He still remains a person.

God is called Krishna which has nothing to do with being Christian or Hindu, it is just His name. He is a person so He also must have a name. Actually He has many names and these names are given according to His qualities. In fact, He has an unlimited number of names because He has unlimited qualities. But there is one name which is very precise and important because it summarizes all qualities of God, and that is “Krishna.” The word “Krishna” means all-attractive. Whatever is attractive for us exists in God. Whether it is beauty, power, knowledge or opulence, sincerity, trust – all these qualities exist in Him and therefore He is all-attractive. 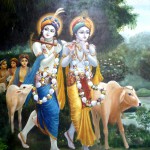 In another story from His childhood, Krishna showed His strength by lifting a whole mountain, Govardhana, in one hand, keeping it up for seven days like a huge umbrella, protecting people and animals from a heavy storm. Later, being a very beautiful person Himself, Krishna showed His opulence by marrying 16,108 wives. With each wife He had ten sons and one daughter and He took care of them all. He remembered their names and gave to all His children a good education.

He showed His power by building a whole city called Dvaraka, inside the ocean, similar to Venice in Italy. Recently archeologists found a wall in the Arabian Sea, near the coast of India. Before His departure from the material world, Krishna predicted that the city of Dvaraka would be completely destroyed and everyone will get killed. It actually happened. And all of His sons died in front of His eyes, fighting with each other while He was watching. This shows that Krishna is also very renounced and free from material attachments because He didn’t try to protect His sons. After everyone was killed He just left. So in all of Krishna’s activities we can see His opulence, knowledge, power, renunciation, beauty and detachment and therefore He is called Krishna or all- attractive. This is the reason why He is a suitable object of love for everyone. And therefore the most important and primary quality of God is love. Krishna displayed that quality when He was living in Vrindavan.

During His time in Vrindavan, up to age eleven, Krishna had many friends, male and female. He played with them and tended the cows in the forest. He was also an accomplished flute player. His melodies melted the hearts of everyone because this sound was just love flowing from His mouth. Govardhana Hill still has the foot marks of His friends on its surface. One day He was standing on the top of that hill and was playing flute. After hearing the sweet sound of His flute, His friends started running toward Him out of love. The sound was so beautiful, enchanting and full of love that the hard stones of the hill had melted, because love has so much power it can melt even stones.

God comes to this world with the main intention of giving His message about love. He is the source of love and He shows the way of love because He wants us to live in love. By following Him we can establish the material world as a kingdom of God. This kingdom of God isn’t some place far away. With love it can be right here, but without love this world can be a living hell. It is up to us whether we want to live in hell or in the spiritual world. If you want to live in hell, there is enough suffering and misery all around. But if you want live in spiritual reality, you have to make a choice and do something about it. This is the message of God. He is bringing something we all hanker for. Because we don’t know that, we have mistaken something else as love that isn’t.

Since love is the most important and primary characteristic of God. He isn’t interested in punishment. He doesn’t take pleasure in giving us trouble. He is like a kind father and we are like lost children whom He wants to get back. Because a characteristic of love is that it can’t be forced on anyone, we have to make a choice. God equipped us with free will so we can make the choice to love Him. God is not forcing anyone to love Him. If we don’t make the choice to love Him, He is not very happy about it and thus He personally comes again and again or sends messengers to teach us the message of love.

The essence of every religion is love and surrender to God. If you study carefully any religion, its most essential message is love toward God because this is the only thing that is missing from humanity. Everything else we do have—houses, cars, oceans, rivers, nice beaches, the I-Pod. But what we don’t have is love of God and without it our lives can remain miserable. An I-Pod can’t help us. We can go on the internet, Facebook, Twitter, and still remain isolated. Loneliness will not go away unless we connect to God, because He is the only thing missing in our lives. We can also try to link with many people, personally or through electronic media, but it doesn’t bring true satisfaction unless we have a link with God. If we have that link, then we can link with anyone else because being fulfilled, we can also help anyone. Without a link with God, when two people try to link up, both remain empty and both try to fill each other without real success. Satisfaction, happiness and fulfillment come only from love of God, but love of God can only come from God because it is always with Him, and for that we have to make an effort.