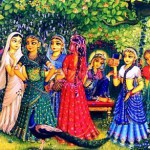 Below is a section of Prīti Sandarbha (Anucchedas 287 and 288, along with my commentary) where Śrī Jīva Gosvāmī speaks about envy in perfected devotees. I thought it would be interesting for the readers, and affords a glimpse into Prīti Sandarbha.

“Oh! These footprints left by that woman [who went off alone with Kṛṣṇa] terribly disturb our minds! She has stolen our property, the nectar of Kṛṣṇa‘s lips, and is enjoying in solitude!” (SB 10.30.30)

Envy is clear in this verse, so the speaker must be different from the [friendly] speakers of the previous verses. Harivaṁśa Purāṇa gives a similar example of envy when describing what Satyabhāmā said about Rukmiñī during the incident of stealing Indra’s pārijāta tree. The meaning of that is easy to understand. Let us consider the following:

It is impossible for Bhagavān’s devotees to have mutual rivalry. Such feelings are not wholesome, as evidenced by Bhagavān’s endeavor to remove the gopīs envy, pride, self-conceit, etc.:

“When Krishna saw the gopīs’ self-conceit, being proud of their good fortune, He suddenly disappeared [from the rasa dance] to show them grace by quelling that pride.” (SB 10.29.48)

Also, [in SB 10.30.42] the sage Śuka used the word “wickedness” (daurātmya) to describe their attitude. The explanation begins by noting that all the pastimes of Bhagavān are meant only to nourish prīti. It is said:

“To bestow His mercy on living beings, Kṛṣṇa performs pastimes in His human form which, when heard, grant devotion to him.” (SB 10.33.37)

(In this verse, the word śrutvā, “after hearing,” means “even just by hearing.”)
Among the pastimes of Bhagavān, amorous play (śṛñgāra krīḍā) nourishes his rasa through a variety of emotions (bhāvas), which can include envy, pride, vanity, and so on. This is why Bhagavān accepts such things in his līlā, and poets describe them.

Moreover, Bhagavān Himself manifests as four types of heroic characters (nāyakas), as suitable for the given situation. These are the courteous hero (dakṣiṇa), the kind hero (anukūla), the mischievous hero (śaṭha), and the audacious hero (dhṛṣṭa). To compliment these, Bhagavān’s līlā śakti manifests corresponding traits in the gopīs, which can thus include envy/rivalry (prātipakṣi).

When all the gopīs feel separation from Kṛṣṇa, they experience humility, which resolves into friendship. This is evidenced in the verse below, which shows that all the gopīs [including the envious ones] experienced friendship with one another:

“While continuing to search out Kṛṣṇa’s path, the gopīs discovered their missing friend nearby. She was unhappy, and bewildered by separation from Her lover.” (SB 10.30.41)

The play of separation quickly augments the gopīs intense thirst for Kṛṣṇa, which in turn greatly augments the intensity of Kṛṣṇa’s delight. The crest jewel of lovers explains:

“O My friends! When people express their love to Me, I do not always respond in kind. This makes them like rich people who have suddenly lost their wealth; they can think only of their wealth and nothing else.” (SB 10.32.20)

This is why there is occasionally separation in Kṛṣṇa’s pastimes. This particular case shows that Kṛṣṇa enjoys the results of separation even more than the fun of pride, vanity, and so on. Thus, the meaning of SB 10.29.48 is: “To quell their pride (mada) and self-conceit (māna), and to give grace in the form of intense desire for Himself, Kṛṣṇa disappeared.” The alternative meaning is: “To quell their pride over having a combined rasa-līlā with all the gopīs, and to break their conceit, He disappeared.” Both explanations agree that the desire to increase the gopīs’ hankering for Himself was a by-product [of seeing their pride].

During separation the gopīs’ situation became pitiable, and this pitiable situation is what Śuka describes as “wickedness. It was not “wickedness” in the real sense, because it was a manifestation of love alone, but the sage Śuka used that word because it fits with the gopī’s own mood:

“The gopīs were completely astonished to hear Her [Rādhā] describe that Śri Kṛṣṇa had first honored Her, but then dishonored Her because of Her wickedness.” (SB 10.30.42)

Śuka has already given his own opinion that there is no defect of pride in Her:

“Although established in the bliss of the Self, and ever reveling in bliss within Himself, Kṛṣṇa enjoyed with Her (Radha) to show [by contrast] the misery of love-stricken men, and the wickedness of women in their love sports.” (SB 10.30.35)

In this verse, svātmarataḥ means He is content within Himself. Although self-satisfied, he continually remains attached to Her. Why? If he is self-satisfied why does he seek to enjoy with Her? The answer is that He enjoyed with Rādhā because She is the essence of His prema, and therefore possesses his self-satisfying qualities.

Another example of such behavior in ātmārāmas is found in the following verse:

“Even those self-satisfied sages who are free from the bondage of karma engage in causeless devotion to Bhagavān Kṛṣṇa, who performs amazing feats. Indeed such are the qualities of Bhagavān Kṛṣṇa.” (SB 1.7.10)

Since nothing else can attract Kṛṣṇa, his attraction to the gopīs must be a manifestation of special prema, not lust. But this special prema is so powerfully attractive that it makes the qualities of lusty people – like pitifulness, etc – appear in both Kṛṣṇa and the gopīs. This is described in the second half of the verse [SB 10.30.35] quoted above.

In the material world, materialistic male lovers express pitifulness in their love-exchanges with their beloveds, whose love is full of pride and conceit. Kṛṣṇa shows this as a result of being controlled by that special prema. And by the special beauty of His prema He also makes wicked qualities – pride and conceit, hard heartedness, independence, manipulation, etc. – appear in the gopīs. This intensifies his enjoyment.

SB 10.30.30, cited in the text above, is from the description of the gopīs searching for Kṛṣṇa when He suddenly disappeared from the rasa dance along with a special gopī identified as Rādhā. The two verses previous to this praised the fortune of this special gopī, so they must have been spoken by Rādhā’s friends. The present verse presents an envious point of view, so it must have been spoken by a gopī from the opposite group, a prātipakṣikī gopī.

Śrī Jīva Gosvāmī raises a very pertinent issue in this anuccheda. Generally we understand that great devotees are free of all vices and full of virtues. Bhakta Prahlāda is praised for not hating his father, even though his father tried so hard to kill him. Kṛṣṇa also praises the virtues of his devotee:

“Dear to Me is My devotee – who is devoid of enmity toward to anyone, friendly to everyone, compassionate, without notions of ‘I’ and ‘mine,’ equipoised in sorrow and happiness, forgiving, content, ever engaged in the yoga of devotion, self-regulated, firmly resolved, and whose mind and intellect are consecrated unto Me.” (BG 12.13,14).

So, how is it possible that the gopīs – the topmost of all devotees, whose glories have been sung by great sages and scholars –behave like ordinary conditioned beings, full of envy?

Kṛṣṇa manifests the moods of various types of heroes, some of which have “unsavory” traits, and the gopīs respond accordingly. Śrī Jīva Gosvāmī explains that the activities of Kṛṣṇa and the gopīs are beyond the grasp of an ordinary mind. Even King Parikṣit had difficulty in understanding it. The behavior of the gopīs is so elevated that it appears to be ordinary. It is like a mountain peak reflecting in a lake; high up in the sky but seeming lower even than the ground. The gopīs act only for Kṛṣṇa’s pleasure. For His pleasure they manifest all types of emotions that resemble those of ordinary people. The difference is that the emotions and activities of ordinary people are centered around their own bodies and things related them, while the emotions and activities of the gopīs are centered only around Kṛṣṇa, without concern for their own selves. Even Brahmā’s four heads reeled when he realized the profundity of the love that the residents of Vraja have for Kṛṣṇa. He told Kṛṣṇa:

“Even Pūtanā and her family members attained You merely because they dressed like a gopī. Therefore, my mind is bewildered when I think of what reward will You bestow on the residents of Vraja – whose homes, wealth, families, children, bodies, lives and hopes exist only for Your sake. What can you give them except Yourself, the topmost of all rewards.” (SB 10.14.35)

In the beginning of Prīti Sandarbha Jiva Goswami described that prema is the highest goal to be achieved. But prema is an unknown subject to us. So, Kṛṣṇa comes to earth to teach us about it. Simply hearing about the prema Kṛṣṇa displayed on earth can transport us to the world of prema, if we hear from a qualified source. Without hearing from a qualified guide, we will superimpose our own experiences onto Kṛṣṇa’s līlā, and remain unable to grasp their true import.

Various emotions like pride, jealousy and conceit are part of worldly romance. The same are also part of the dealings between Kṛṣṇa and the gopīs. The difference, however, is in the inner feelings.

In worldly romance, these feelings are based on negativity and therefore lead to negative and destructive actions – sometimes even to the extent of murdering one’s rival or a person who poses a problem, even if that is one’s husband or wife. This does not happen to the gopīs, however, because all their emotions manifest only for Kṛṣṇa’s pleasure. Therefore, they never try to destroy the rival gopī or harm anyone. Quite the opposite, their envy quickly resolves to friendship, as shown in SB 10.30.41.

The gopīs who belong to Rādhā’s group think that only their mistress knows how to please Kṛṣṇa. Thus they try to unite Radha and Kṛṣṇa, and employ various tricks to foil any chances hoped for by the opposite group, led by Candravalī. Kṛṣṇa greatly relishes this rivalry, because He enjoys the inner feelings of love that motivate it. Thus the envy in great devotees like the gopīs is not a material quality but a manifestation of their pure love for Kṛṣṇa. All their emotions, even those that appear to be negative, spring only from love.

Another important point Sri Jiva Goswami makes here, is that Kṛṣṇa intentionally gives pleasure to the gopīs by increasing their hankering for Him, by not always being compliant and cooperative. Thus the gopīs also relish Kṛṣṇa misbehavior.