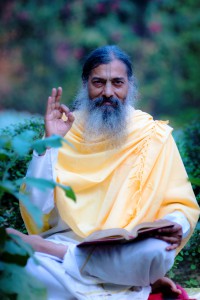 In India, there are two types of spiritual organizations, one is called parampara and the other is called sant-mat. A parampara is based on scriptures, specifically the prasthana trayi, which includes the ten principal Upanishads, Vedanta-sutra and Bhagavad Gita. Examples of parampara are Advaita-Vedanta of Sankaracaraya and the Four Vaishnava Sampradayas.

A sant-mat is based on the teachings of a holy person which are accepted as authoritative by his followers. Examples of sant-mat are the followers of Kabir, Radha Swami, Dadu, etc.

Every school, whether a parampara or a sant-mat, has two aspects: the theoretical aspect and the practice done to attain the desired goal. To practice correctly, a proper understanding of siddhanta and the practice itself is compulsory. If one is not clear about these or has misconceptions, it will reflect on one’s practice and thus one is liable to miss the goal. For this reason, study of the foundational books or one’s parampara is of the utmost importance.

Although Caitanya Mahaprabhu is Krsna Himself and was fully absorbed in the mood of Srimati Radharani, before manifesting this mood, He also underwent rigorous study of the scriptures and was known as a pandita, or scholar. The same is true about His immediate intimate followers, the Gosvamis. They were all learned in scriptures. It is only later that they led the life of renunciates, but even then they did not completely give up the culture of scriptural knowledge. This is evident from the enormous amount of literature they produced while living in Vrindavan.

With this fact in mind, Babaji Satyanarayana Dasa has conceived of starting a course in scriptures at two levels. The first one will be a five-year course, which he will teach six months per year. The first course is scheduled from Oct. 16, 2016 through March 31, 2017. It will be called Bhakti-tirtha. The Tirtha and Shastri degrees that are given in Sanskrit schools are equivalent to graduate degrees of modern academia. The second course will be more in depth and for a period of 12 years.

The Bhakti-tirtha course will include:

2) Study of the Yoga Sutras for the first part of the course, followed by Nyaya-sutra and Tarka-sangraha (Nyaya)

3) Tattva Sandarbha for the first part of the course, followed by Bhakti-rasamrita Sindhu

Sanskrit, Tattva Sandarbha by Jiva Gosvami, Bhakti-rasamrita Sindhu by Rupa Gosvami, and Tarka-sangraha will be given by Babaji (Dr. Satyanarayana Dasa). Tarka-sangraha is an entry level book of the Nyaya and Vaisheshika schools.

Advaita Prabhu Das (Prof. Edwin Bryant) will teach the Yoga-sutra, which is helpful in understanding the first two chapters of Bhakti-rasamrita Sindhu.

Prof. Matthew R. Dasti will teach the Nyaya-sutra. This course will study the fundamental text of ancient Nyaya by looking at some of its most important debates and discussions. These include a defense of the existence of the self, an argument that God must exist as creator, and a vindication of the reality of the world against Buddhist skeptics and idealists. Readings will be English translations of passages of the sutras with portions of important commentaries. This course is coupled with the Tarka Samgraha, a systematic overview of Nyaya/Vaisheshika in its newer (navya) period, that will be taught by Babaji.

Knowledge of the Sanskrit language and Nyaya is essential to understand any school of Vedic thought. Therefore, one should not think that these two subjects have no utility for a devotee. Among the traditional Indian Sanskrit scholars there is a very popular saying, kanadam paniniyam ca sarva sastropakarakam (“The knowledge of Logic and Sanskrit grammar indispensable to understand any scripture”).

This course is not meant to just give theoretical knowledge, but also to have a personal experience of Gaudiya Philosophy and an understanding of how to practically apply it in life.

The Sanskrit course will cover the most important aspects of Sanskrit grammar along with core vocabulary, and will prepare students for the more advanced Sanskrit grammar studies taught in the traditional way. Students who will attend the course personally will also practice speaking Sanskrit outside the classroom.

Prerequisites: This introductory course does not require any prior knowledge of Sanskrit except the knowledge of the Devanagari script.

Classes on the Yoga Sutras, Tattva Sandarbha, Bhakti Rasamrita Sindhu and Gopal Champu will be open to the public, and not restricted only to registered students. The classes on Sanskrit and Nyaya can only be attended by students who are registered for the complete course.

All classes are free of charge, but there will be a yearly registration fee of US $200, to cover administrative expenses. This fee is applicable until the end of March. Registration after the end of March will be US $250. Students who plan to stay at Jiva ashram need to pay for boarding and lodging.

Those who are not able to attend the course can receive daily audio lectures for a fee of $ 108 per month. They also have the facility to participate in weekly Question and Answer sessions over an electronic conference system.

Registrations should be addressed to:  jaya@jiva.org. Payments can be made through the website. Same information see also here.

After this Bhakti-tirtha course is completed, it is Babaji’s wish to stop his travels during the summer and start a 12-year course, which he plans to teach throughout the year in Vrindavan with a break of a few weeks in the summertime when it becomes too hot to study. He is planning  to provide free boarding and lodging for this course so that the students do not have to worry about supporting themselves and can dedicate themselves to study and the practice of bhakti. The venue for the 12-year course may be outside of Vrindavan, where we have acquired 13 acres of land and hope to build facilities for classrooms and the residence of students.

After the 12 year course,  Babaji plans to do a year long Japa-Svadhyaya. Thus the complete program will cover 18 years.