November 21, 2014Articles by Satyanarayana DasaShastraComments Off on Bhāgavatam Pedagogy – Part 1 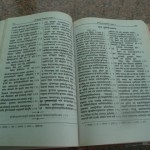 Chapters four through seven of the First Canto of Śrīmad Bhāgavat Purāṇa relays the story of how Śrī Vyāsadeva composed the present version of this tremendous work. After arranging the One Veda into four, he wrote eighteen Purāṇas, including the original version of Bhagavat Purāṇa, the Mahābhārata and the Vedānta Sūtra.

Even after such prolific writing, Śrī Vyāsadeva felt dissatisfied. In response to this and at the behest of his teacher, Śrī Nārada Muni, he composed Śrīmad Bhāgavatam, or Bhagavat Purāṇa, his ultimate literary achievement. This revised version of the original Bhagavat Purāṇa was the outcome of his experience gained in samādhi (SB 1.7.4-6).

The purpose of Śrīmad Bhāgavatam is to glorify the Supreme Absolute Truth, known as Śrī Kṛṣṇa, for the benefit of the suffering humanity. Śrī Vyāsa himself calls this Purāṇa the ripened fruit of the Vedic tree and compares it to the personification of rasa, or devotional relish. It is to be tasted by the rasikas, the connoisseurs of rasa, and relished by the sahṛdayas, the sober-hearted people or those whose hearts are imbued with sattva (SB 1.1.3).

Thus we can say that the Śrīmad Bhāgavatam is one of the eighteen Purāṇas with the additional characteristic of rasa, placing it in the category of kāvya (lit., poetry) as well. Kāvya is described in Sāhitya-darpaṇa, an authoritative book on poetics by Viśvanātha Kavirāja as vakyam rasatmakam kāvyam: that whose very essence is rasa is called kāvya. Without rasa, a poetic work cannot be called kāvya.

The fact that Śrīmad Bhāgavatam is a kāvya is expressed in the following verse cited by Śrī Jiva Gosvami in Tattva Sandarbha (Anuccheda 26, quoted from Harī Līlāmṛta 1.9), which also establishes Śrīmad Bhagavatam as the highest authority in disseminating knowledge of the Absolute:

“The Vedas, Purāṇas and poetic works (kāvya) instruct one like a master, friend, or beloved, respectively, but Śrīmad Bhagavatam instructs like all three.”

This statement reflects the traditional Indian understanding that one can be instructed as if by a ruler, a friend, or a lover. The Vedas utilize an imperative voice, resembling an overlord: satyaṁ vāda dharma cara. “Speak the truth and be religious” (Taittirīya Upaniṣad 1.11). The Vedas do not need to offer logical reasons for following their instructions, because one is expected to obey without question. The Purāṇas instruct like a friend, narrating stories with moral conclusion and providing reasoned explanations when required. Kāvya, or poetic literature, gives counsel like a beloved woman, who uses sweet words while sharing indirectly. Such instructions are expressed in an aesthetically pleasing way to attract the reader or hearer. Śrīmad Bhagavatam uses all three of these methods to convey its teachings.

Kāvya makes use of lakṣaṇā-vṛtti, or indicated meaning, and vyañjana vṛtti or suggested meaning, to convey its intent. In poetics, vyañjana vṛtti is considered the essential beauty of a piece of poetry. If something is stated directly, the kavis, or learned poets, consider it rather cheap and gross. In kāvya, rasa is predominantly based on vyañjana vṛtti –-especially the mādhurya rasa. Therefore, Indian plays and poetic works are full of such vyañjana, or expressions with suggested meaning. As indicated in the very beginning of the Bhāgavatam (SB 1.1.2), this work is a rasa śāstra, and thus makes use of lakṣaṇā and vyañjana vṛtti profusely – especially in the Tenth Canto.

The Ten Topics of the Bhāgavatam

Upon listing the ten topics of Bhagavat Purāṇa, Sukadeva Gosvami mentions that the Bhāgavatam uses indirect statements to explain these topics.

“In this book, the following ten topics are described: sarga [the original setting in motion of primordial nature by the Lord, i.e., primary creation], visarga [the secondary creation of the primal cosmic being, Brahmā], sthāna [the sustenance of living beings], poṣaṇa [the mercy displayed by the Lord in nurturing His devotees], ūti [the subconscious imprints and desires that promote engagement in goal-oriented action], manv-antara [the religious path enacted by the Manus], īśānukathā [narrations of the Lord and His devotees], nirodha [dissolution of the creation], mukti [liberation] and āśraya [the substratum or ultimate shelter of individual and collective being].” (SB 2.10.1)

The following verse of the Bhāgavatam provides further description:

“The first nine topics are described to make the tenth subject explicit. The great scholars describe sometimes directly or by literal meaning and sometimes indirectly or by suggested meaning.” (SB 2.10.2)

“To clarify the meaning of the tenth subject depicted here, the highly elevated ātmās [mentioned in this book, such as Vidura and Maitreya] describe the characteristics of the first nine subjects, sometimes directly, by offering prayers of glorification using words that graphically depict their intended object, and sometimes indirectly, by pointing out the intended meaning (artha) [i.e., tātparyam] implicit in various narrations.”

The Śrīmad Bhagavatam discusses ten topics, beginning with primary creation, but the sages’ real purpose in describing the characteristics of the first nine is to provide us systematic, lucid knowledge of the tenth item, the ultimate shelter of all being, Śrī Kṛṣṇa. One might object here that it is not apparent exactly how the discussion of the other nine topics elucidates the tenth. To this we reply that in the Bhāgavatam the sages describe the tenth topic both directly (śrutena), by the explicit utterance of prayers and other statements, and indirectly (arthena), through the implied purport (tātparya) of various historical accounts.