The Purpose of Story-Telling

The intention of Śrī Vyāsa is not to give us historical information, but to impart transcendental knowledge. Still there may be historical facts articulated to convey the intended meaning. Śrī Śukadeva Gosvāmī makes this clear in the verse:

kathā imās te kathitā mahīyasāṁ
vitāya lokeṣu yaśaḥ pareyuṣām
vijñāna-vairāgya-vivakṣayā vibhovaco-vibhūtīr na tu pāramārthyam
“O King, I have narrated to you these stories of glorious kings, who achieved great fame in this world and then met their demise, in order to impart to you knowledge of the insubstantiality of sense enjoyment, and thereby to evoke in you a spirit of detachment from the same. These stories are merely a display of eloquence and have no bearing on the Absolute Truth.” (SB 12.3.14)

The last sentence in the verse says that “the stories are merely a display of eloquence,” vaco-vibhūtī, which implies that not everything is to be taken literally. Sometimes facts are exaggerated to make the description appear very attractive, extraordinary, and wonderful.

King Citraketu and his Wives 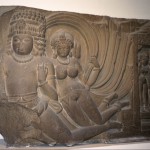 For example, the fourteenth chapter of the Sixth Canto of Śrīmad Bhāgavatam, describes the story of Citraketu, the great king King of the Vidyādharas who was without a son. In the varṇāśrama system, it was obligatory for a married person to have a son so that he could continue the lineage, which was necessary for the performance of the śraddhā ceremony. Therefore, in a bid to have a son, Citraketu married ten million wives, one after another, as stated in the verse:

The text says that the king had ten million [sahasrāṇāṁ sahasrāṇi daśa, lit., ten thousand thousand] wives, which were all barren and therefore didn’t give him a child. If this figure were literal, it would take him 27,397 years if he married a wife a day. Given such an impossibility, we must understand this to be a poetic description. It is called atiśayokti- alaṅkāra, hyperbole or an expression involving exaggeration. Sahitya-darpaṇa, which was referred to above, gives definitions of various alaṅkāras, including atiśayokti, which are divided into five types (10.46).

The famous poet Daṇḍin gives the following example of atiśayokti:

“Wearing garlands of white jasmine and cloths of linen, their limbs moist with sandal paste, the trysting ladies are hidden in the moonlight.” (Agni Purāṇa, 3.44.26)

Here the whiteness of the girls’ dresses is exaggerated to the point of making them invisible in the moonlight. Similarly, the intention of the statement about Citraketu’s ten million wives is to show the intensity of the king’s desire to have a son. As stated above, the purpose of the story is to instill renunciation in the mind of the reader. The human mind is full of desires, and, according to Vedic scripture, there are three chief desires: desire for pleasure, desire for a good future life, and desire to have good progeny. None of them can be completely satisfied, as we see in the present story where the king is unable to fulfill his desire for good progeny.

Sage Aṅgirā blessed King Citraketu that he would be able to beget a son whose name will be harṣa- śoka prada (lit., the giver of pleasure and grief). The king was overjoyed when his son was finally begotten, but his joy plunged into grief when the co-wives of the child’s mother poisoned the son out of envy. Thus he remained dissatisfied.

Lessons from the Suggested Meaning

The suggested meaning this story is that if he was not able to fulfill his desires with ten million wives and thus remained dissatisfied, how can an ordinary person be satisfied in material life, who has only one wife? Citraketu was a king and despite having millions of wives, he was frustrated even after his desire was fulfilled. Therefore, how can an ordinary person, who has only one wife and many desires, be satisfied?

The wife in this tale signifies the means to satisfy desire. Therefore it is understood that this statement was made to instill detachment in the listeners and readers of the Bhāgavatam, as explained above by Śukadeva Gosvāmī (SB 12.3.14).

Taking the expression “ten million wives” as alaṅkāra, however, doesn’t mean that there are no real wives – for the king obviously had many wives. The number of ten million wives can also denote mental states (vṛttis). There are similar instances where the Bhāgavatam compares the mind and its movements, the vṛttis, to wives, as in SB 4.29.5. In this chapter, Nārada speaks to King Prācīnabarhi, telling him the allegorical story about King Purañjana who is completely infatuated with his queen Purañjanī. Purañjanī can be understood as the intelligence of King Purañjana, but is, at the same time, his wife in the literal sense. That there are millions of vṛttis is stated by Jaḍa Bharata in his instructions to Rahūgaṇa. He says that there are eleven original vṛttis which transform into thousands and then millions of vṛttis (SB 5.11.11). The name Citraketu itself suggests a mind full of various desires (citra). Thus the conclusion of the Citraketu story is that one cannot become materially satisfied trying to fulfill one’s unlimited desires; satisfaction or fulfillment can be experienced only if these vṛttis are surrendered to God or used in His service. This is exactly what Citraketu did later on.

Thus not every detail in the Bhāgavatam is meant to be taken literally, and we must carefully use intelligence to discern direct from implied and associated meanings.