May 4, 2014Questions & AnswersComments Off on Bhagavan’s External Energy

Question: I was reading the Tattva Sandarbha edition that was translated by you.

In anuccheda 31 you have commented that:

“In the Bhagavad-gita  (7.5)  Lord Krsna tells Arjuna that His marginal energy, the jiva, is  superior to His separated, material energy, maya. One may then ask, how does the superior jiva come under the control of  the inferior nature, maya? The answer is twofold: because the jiva is infinitesimal, and also because maya can transcend logic in her actions. In the Third Canto of Srimad Bhagavatam  (3.7.9), Maitreya Muni responds to a question from Vidura as follows:

The external energy of  the Supreme Lord acts contrary to logic [i.e., her behavior cannot be understood simply through logic]; otherwise, how is it possible that the living entity, who  is  conscious  and  liberated, becomes bound and miserable?

Commenting on this verse, Srila Visvanatha Cakravarti Thakura gives an analogy: Although the sun is powerfully effulgent,  still the cloud, generated from the sun’s potency, can cover the  sun  from the vision of  a  person on earth.  Similarly, although the jiva is by nature superior to Maya, she still has the power to cover his vision of the Lord.”

How to understand that this contrary acting of maya is not applicable towards the Supreme Lord?

Answer: Because it is Lord’s energy therefore it cannot overpower Him. Just as the cloud cannot cover the sun. It can only cover our vision of the sun.

Question : How to understand that although the external energy of the Lord can act contrary to logic still she cannot cover the Supreme Lord?

Answer:  Contrary to logic does not mean it is omnipotent. It means it can do some act which is not within the grasp of logic.

Question:  How to understand that the external energy cannot become more powerful than the energetic although she has the power to defy logic?

Answer:  Why should it be so? You are asking a logical question and expect a logical answer when asking about something beyond logic. One meaning of something beyond logic/contrary to logic is that it can be known only from sastra. So sastra says that the external energy cannot overpower the energetic, the Lord. He is isvara, svarat.

Question: Logic says that energy is subordinate to the energetic. So if maya can defy logic then she can also defy this logical understanding. 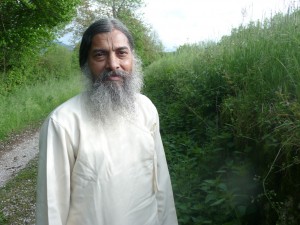