Vrindavan, 2011.01.06 (VT, by Jagadananda Das): A group of 33 undergraduate students from Rutgers University in New Jersey, USA, is enjoying a Christmas break at the Jiva Institute of Vedic Studies in Sheetal Chaya. The program is a part of Rutgers’ University Study Abroad program, which gives these American students the opportunity to get an authentic

Vrindavan, 2011.01.06 (VT, by Jagadananda Das): A group of 33 undergraduate students from Rutgers University in New Jersey, USA, is enjoying a Christmas break at the Jiva Institute of Vedic Studies in Sheetal Chaya.

The program is a part of Rutgers’ University Study Abroad program, which gives these American students the opportunity to get an authentic cultural experience in Vrindavan under the guidance of Jiva Institute director,  Dr. Satyanarayana Dasa Maharaja.

The 3-credit introductory course in Hinduism lasts three weeks. The students spend three hours each morning covering the academic component of the course, which primarily consists of a historical study of the philosophical and religious traditions of India, with a particular focus on the devotional traditions that typify Hinduism.

But besides that, they have also been getting guided tours to the temples and holy places of the region, instruction in the religious art, iconography, song, dance, and other cultural and aesthetic expressions of Hinduism typical of the area, as well as exposure to temple worship, pilgrimage, and myriad other forms of devotional practice.

Program coordinator Robert Lindsey said, “The students have already done Parikrama of Vrindavan and Govardhan Hill, visited Radha Kunda, and the Taj Mahal in Agra,” he said, “but still have boat trips along the Yamuna River and the Mathura Museum and Krishna’s birthplace left to see.”

Daily yoga and music classes are also being offered as are opportunities for Ayurvedic consultations, kirtan, and cow service.

Himanshu P Shukla, Chairman of the Advisory Committee for the Rutgers’ Summer Hindu Studies Program and one of its chief initiators, visited Jiva Institute yesterday and talked with the students and teachers to assess its benefits. He said that the potential for such programs is especially great in religious studies because it greatly expands the feeling for the environment in which the religion is a living, breathing reality.

“We have been organizing these courses in India since 2006,” he said, “and they are becoming more and more popular. There is a high level of interest at Rutgers since there are approximately 5,000 students of Indian origin enrolled there. This gives them a chance to connect with their roots in a novel way. About one quarter of this group is of Indian background. But as you can see, there are many other students from other backgrounds, and we hope to attract those who are becoming interested in interfaith disciplines in New Jersey.” 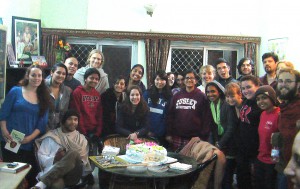 Noted scholar of Hinduism at Rutgers, Prof. Edwin Bryant, is also an enthusiastic supporter of the project. A frequent visitor to Jiva Institute and Vrindavan, he recognizes the great value of such cultural exchanges. The plan is now to expand the number of courses that will bring more Rutgers students to Jiva, at different levels, for longer periods of time and even graduate degree courses. Other American universities have also expressed interest in the program.

More information from Friends of Vrindavan: