Home  |  Why Offense Should Be Avoided

Why Offense Should Be Avoided

Question: Please kindly help me to understand why aparādhas to the deities, dhām, etc should be avoided. I understand that everything in the śāstras has a scientific reason, so I would like to know the scientific or psychological reasons why scriptures say not do certain things because they can be aparādhas.

I do not just want to refrain from offense because of fear of scriptural injunctions. I am not a vaidhi bhakta, I love the path of sacred passion. So if I have to avoid offenses, I want to understand deeply why. What is the connection with my human condition, what happens in my subtle or gross body if I do this offense??

Answer: Aparādhas are related to the psychology of love. If you love someone, then it is natural that you do not do anything that can irritate your lover. For example, if your lover has an employee whom he likes very much: If you criticize that employee and your lover comes to know about it, he will not feel happy. He may not say anything to you but will not be very pleased. Similarly, if we criticize devotees, then Kṛṣṇa does not like that because He likes His devotees. Thus vaiṣṇava-nindā is an offense. The other offenses can be understood in the same way.

When we love a person truly, we love everything about him or her—the person’s possessions, relations, actions, behavior. This is because love means oneness of heart. So these bhaktas who have attained love, the siddha bhaktas, they cannot commit an offense because their heart is one with Kṛṣṇa’s heart. The same potency, hlādini-śakti, exists in the heart of the bhakta and his/her worshipable deity.

But when we are on the sādhanā stage, we have our old saṁskārās, which are not devotional, or in harmony with the psychology of love. Thus śāstra gives us guidelines what to do and what not to do. Śāstra is the word of Bhagavān. Bhagavān also is a person and thus has a psychology. He has His likes and dislikes, like any other person. Therefore, bhakti is nothing but the study of the psychology of love, the relation between a bhakta and Bhagavān. By studying śāstra we can understand the mind of Bhagavān – not completely but up to a certain extent. 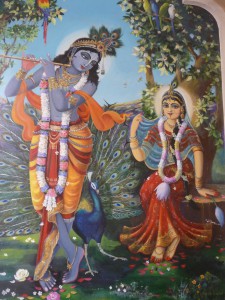 Every action we perform has an influence on our subtle body and creates an impression which will inspire one to repeat this action. Thus if we perform an action which is unpalatable to Bhagavān, it will leave impressions which become the seeds for repetition of this action. If this seed of an offensive impression is already there, it fortifies it.

Question: There is the story of Indradyumna Mahārāja in the Bhāgavatam, who was engaged in worship and then when Agastya Muni arrived, he didn’t acknowledge him and continued.  Because of that, he was cursed by Agastya Muni. How to understand this situation? Would it have been proper for him to stop his worship?

Answer: Yes, it is appropriate to stop one’s worship if a great personality like one’s guru comes.  The Bhāgavata says that one who sees the Lord only in the deity is a neophyte because his concept is that God is here only and not in the devotees. Perhaps Agastya was his guru, so when your guru comes you have to show respect.  The Lord will not be displeased with you for stopping your worship for that reason.  You have to observe who the person is.  One does not have to stop for anybody and everybody. In case of Indradyumna, Agastya Muni was a very special guest.  The specialty can also be understood by the fact that he could curse him to become an elephant.

We also heard the story of Śatadhānu who was engaged in a type of worship and was observing a vow. So when he spoke to an atheist, this became an offense.  He committed this offense knowingly, we know this because his wife was more intelligent and didn’t speak and if she knew that she should not speak with an atheist while observing this special vow, then the king must also have known.  Even though he knew, he didn’t follow it and as a result, he suffered.  Because of this offense, he had to become of dog and go through several other animal species in further lives.

So Indradyumna had knowledge of śāstra and knowingly he made the mistake of not given proper respect to Agastyamuni. This shows that offense committed in knowledge is more dangerous than done in ignorance.

Sometimes a worshiper may disregard a great devotee because of pride, thinking that he is a great worshiper of the Lord and does not care about anyone else. Stories such as the ones of Indradyumna and Vṛtrāsura are there in the Bhāgavata and other Purāṇas to teach us about the graveness of offenses so that we avoid them and learn devotee behavior.