Question: I am reading “The Yoga of Dejection” again. On page 153, when answering a question about varnasrama, you say: “Aptitudes can be ascertained by studying the genes of the students.” This doesn’t sit well with me as this is eugenics, which is something with which I cannot agree. Can you clarify what you mean by this? Surly varnasrama has no relevance in the modern age since even in India it is not followed. Mahaprabhu dismissed it in his talks with Raya Ramananda.

Answer: Varnashrama in its original form is not being followed even in India. I agree with that. But I do not agree that the basic principle behind varnashrama is not relevant in modern society. The varna is based on the principle that everybody is born with some nature/aptitude and it is most natural for a person to train oneself according to one’s nature and work in that field.

I do not see anything wrong with that but only merit. Please let me know what your objection is to that.

The ashrama system was to train and facilitate one to work according to one’s nature.

If your aptitude is in business better you learn business and be a businessman than do something else and feel dissatisfied e.g. become a medical doctor and make a business of patients.

You will always feel dissatisfied working in a field which is not in line with your nature. This is one of the ills of modern society. In USA there is a saying TGIF – Thank God it is Friday, because people are bored with their work. But if work suits your nature, you will thank god every day, because you love to do your duty.

People will always have different natures/aptitudes. At present there is neither a way to recognize it, nor a way to maintain/ improve it. We worry about pedigree of dogs and horses but not about human beings. So there is chaos and confusion in the mind of people. I wrote genes just as a way to figure out nature, if at all possible. It is just a suggestion. I do not know what your objection is to that. When people are sick they undergo tests such as blood test. Why do you have no objection to that?

As far as Mahaprabhu rejecting varnashrama, that has not been understood properly. He is stressing the importance of bhakti over varnashrama. The real purpose of varnashrama was to facilitate bhakti. There is no point in following varnashrama without bhakti for which it is meant, that will be like driving nicely on a highway by following all traffic rules but not having any destination to reach.

Mahaprabhu was a sannyasi and remained so. Sannyasa, I believe, is part of varnashrama. He followed it very strictly and so did his followers. Why did he reject Chota Haridasa if He was not following varnashrama? Why did he not visit his birthplace after taking sannyasa? 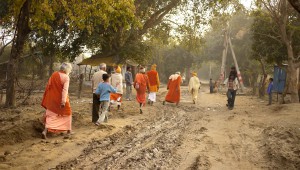