Home  |  The Transcendental Nature of the Holy Name – Part 2

The Transcendental Nature of the Holy Name – Part 2

July 8, 2012Articles by Satyanarayana DasaPhilosophyShastraComments Off on The Transcendental Nature of the Holy Name – Part 2

By Satyanarayana Dasa: It is common experience that to achieve something in the material world one has to work very hard. Based on this knowledge, it is very hard to believe that one can attain anything, spiritual or material, merely by chanting some sounds, even if they are identified as Holy Names.

It is common experience that to achieve something in the material world one has to work very hard. Based on this knowledge, it is not easily understood that one can attain anything, spiritual or material, merely by chanting some sounds, even if they are identified as Holy Names. Śrīla Jīva Gosvāmī warns against such a mentality. He says that one should not think that these scriptural statements are artha-vāda, or exaggerated glorification. 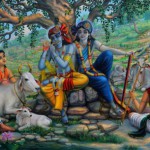 Krishna and Balaram on top of Govardhan Hill / Vrindavan Art

According to the Pūrva-mīmāṁsā, the Vedas contain five types of statements: vidhi, mantra, nāma-dheya, niṣedha and artha-vāda. The purpose of artha-vāda is to encourage people to perform certain religious acts and discourage their opposite, irreligious acts. Such statements are either eulogistic or critical in nature. For example, there is an injunction in the Taittirīya-saṁhitā, “One desirous of wealth should sacrifice a horse to the Wind-god.” In another part of the same Saṁhitā, Vāyu is glorified so that one might be prone to worship him: “Vāyu is indeed the swiftest of the gods”. This glorification of the Wind-god implies that he will quickly reward his worshippers, and this will in turn incite people to sacrifice a horse for him. Because it has such a motive, this statement of glorification of the Wind-god is also included in the category of artha-vāda.

The scriptural statements glorifying the Holy Name are not in the same category, and should not be considered exaggerations. To do so is to commit one of the ten offenses against the Holy Name, tathārtha-vādo hari-nāmni kalpanam (Padma Purāṇa, Brahma-khaṇḍa 25.15).

Moreover, if statements eulogizing the chanting of the Holy Names are considered artha-vāda, then naturally the question arises: For which vidhi, or injunction, is such artha-vāda put forth? This is because artha-vāda is always subordinate and supplementary to particular injunctions, or vidhi-vākya. This vidhi could be for the chanting itself or for some other imperative. There are no statements regarding the Holy Name that its chanting forms part of a separate vidhi. If, on the other hand, the vidhi is chanting itself, then there is no difference between the injunction to chant and eulogy of chanting, as both are direct statements recommending one to chant. Moreover, any injunction that recommends the performance of an activity and directly states its benefits should not be considered as artha-vāda. When the direct or primary meaning is applicable, one should not search out a secondary meaning. 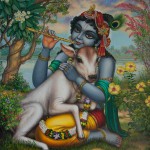 Therefore, it should be understood that the names of the Lord are transcendental and nondifferent from Him, as confirmed in the Padma Purāṇa. Being nondifferent from the Lord the name is as potent as the Lord. Thus its glorification is not an exaggeration. Mere chanting it can award the results described in śastra. In the material world also it is seen that sometime a small act can bring a big result. A little spark of fire can ignite a big forest, or an invisible virus can kill an elephant. Therefore, there no reason to doubt the power of chanting the name.

Another objection may be raised. If the Lord’s name is transcendental, how can it be uttered with one’s material tongue? Śrīla Jīva Gosvāmī says that the Name is not vibrated with the tongue. It is self-manifest, just like the Lord, and appears by Its own will. This is also the verdict of Śrīla Rūpa Gosvāmī:

A vivid example is Bharata Mahāraja, who took birth as a deer. When faced with death, the deer chanted the name of Hari (SB 5.14.45). Normally, a deer has no ability to produce articulate sound, but in this case the Name manifested on its tongue when the creature desired to chant. This proves that the Holy Name is independent and can manifest by Its own sweet will, being nondifferent from the Supreme Lord, who is Its Repository. Gajendra, the elephant, is another example of an animal to whom the Holy Name became self-manifest (SB 8.3.32).

Not only the Holy Name, but the Vedas too are self-manifest. In the Eleventh Canto, Kṛṣṇa describes this phenomenon to Uddhava:

The transcendental sound of the Vedas is very difficult to comprehend and manifests on different levels within the prāṇa, senses, and the mind. This Vedic sound is unlimited, immeasurably deep and unfathomable, just like the ocean.
As the unlimited, unchanging, and omnipotent Supreme Lord dwelling within all living beings, I personally establish the Vedic sound vibration, in the form of Oṁkāra, within all living entities. It is thus perceived subtly, just like a single strand of fiber on a lotus stalk. (SB 11.21.36-39)

An objection can be raised here. If the Holy Name is so powerful and glorious, then why do people in general not feel Its potency, even after daily chanting thousands of times? Excluding the narrations of great devotees in scripture, it is almost impossible to find a person who has experienced the full power of the Holy Name, as described.

The reply to this is that chanting must be free from offenses. Just as chanting pleases the Lord, an offense displeases Him. Naturally, a disposition that is displeasing, in the sense of inharmonious with the complete Reality that is Bhagavān, inhibits the Holy Name from manifesting Its power. Just as, a servant may serve his king in various ways, but if at the end of the day he were to abuse the king, the latter would certainly be upset. And the displeasure would be greater still if such abuse were levelled at the time of service. The king would no doubt punish such a servant.

One must therefore avoid even the slightest offense. Although fire has the power to burn grass, it will not burn grass that is green. The grass must be dry before it will burn. Offenses are so powerful that even the living liberated (jīvan-mukta) can fall from the liberated status. Śrīla Rūpa Gosvāmī writes:

Even bhāva, the permanent awakening to transcendental being, can disappear altogether if one commits a grievous offense to someone who is very dear to Kṛṣṇa. If the offense is of medium gravity, bhāva can mutate into a mere facsimile of itself (bhāvābhāsa). Offenses of lesser gravity can transform bhāva of a higher grade of intensity and completion into bhāva of a lesser grade. (BRS.1.3.54)

The monkey Dvivida was a servant of Lord Rāmacandra, but he committed an offense towards Lakṣmaṇa. The result was that he became demoniac and finally had to be killed by Lord Balarāma. 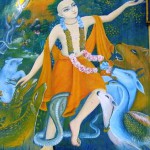 An offense to a devotee is also an offense towards the Holy Name. And this offense makes one’s heart as hard as stone and incapable of feeling any of the effects of chanting. Therefore, more important than just chanting is to avoid offenses. If one is not cautious to avoid offenses, the chanting will implicate him more and more in material life. It is like potent medicine: if taken wrongly, it will have a powerful adverse reaction. Therefore, Lord Caitanya advised that one should always chant the names of Hari with appropriate respect for all beings, and without desiring any respect for oneself (amānina mānadena kīrtanīyaḥ sadā hariḥ). The injunction to be respectful and humble in this verse precedes the order to chant in the next verse (3) of His Śikṣāṣṭaka.