Home  |  The Source of All Sources: Śrī Kṛṣṇa as Svayaṁ Bhagavān – II

The Source of All Sources: Śrī Kṛṣṇa as Svayaṁ Bhagavān – II

The word tu in kṛṣṇas tu bhagavān svayam distinguishes Kṛṣṇa from all the avatāras mentioned in the preceding verses, including all the aṁśas, vibhūtis, and even the Puruṣa Himself. According to Amara-koṣa, a noun followed by tu has no relation to anything that precedes it. Alternatively, the word tu implies restriction, in the sense of “only” or “exclusively.” The verse would then be understood to mean, “Only Kṛṣṇa is Svayaṁ Bhagavān [and no one else].”

A direct statement (śruti) that is employed definitively (sāvadhāraṇā), using emphatic particles, such as eva or tu, carries the greatest authority, overriding all other statements. Therefore, even if Puruṣa, also sometimes called Mahā-Nārāyaṇa, is referred to as Svayaṁ Bhagavān in some scriptural statements, these are to be understood in a secondary sense. This is to say that Nārāyaṇa can be indirectly considered as Svayaṁ Bhagavān only in relation to all the avatāras that expand from Him, but not in relation to His own source, Śrī Kṛṣṇa. This is to be concluded because there cannot be two forms of Svayaṁ Bhagavān.

In the opening verse of the Third Chapter, Sūta Gosvāmī uses the two words pauruṣam (“of the Puruṣa”) and bhagavān. In concluding his description of the avatāras, he again uses the words puṁsaḥ  (“of the Pumān,” i.e., the Puruṣa) and bhagavān. The words puruṣa and pumān are synonymous. It is indeed quite appropriate to conclude a topic by using the same words with which it was begun, or synonyms thereof. Otherwise, if a speaker were to introduce one subject in the beginning and a different one in the conclusion, it would be difficult to understand his or her intention. This repetition of the same words in the opening and closing statements also shows not only that Bhagavān is distinct from and the source of the Puruṣa, but that Kṛṣṇa is Bhagavān Himself.

After establishing Kṛṣṇa as Svayaṁ Bhagavān on the basis of verse 1.3.28 of the Bhāgavata, Śrī Jīva Gosvāmī next sets about defending his conclusion (siddhānta) in the face of the many apparently contradictory statements found in the Bhāgavata Purāṇaas well as in other Purāṇas. There are many statements depicting Kṛṣṇa as an aṁśa (portion) of the Puruṣa, while there is only this single phrase (kṛṣṇas tu bhagavān svayam) stating unequivocally that Kṛṣṇa is Svayaṁ Bhagavān. One might reasonably question, therefore, why this latter statement should not be considered as mere eulogy, artha-vāda. If such be the case, then the statement need not be taken literally.

Śrī Jīva Gosvāmī replies that this statement occurs at the very beginning of the Bhāgavata, in its third chapter, where the purpose and subject matter of the entire book are still being defined. This chapter provides a summary of the various avatāras, who will be described in greater detail later in the Bhāgavata. Śrī Jīva asserts, therefore, that this chapter is itself a sūtra  (an aphoristic rule) for all statements regarding the avatāras, encapsulating the detailed representation to come later.

Most of the knowledge that developed regarding the usage, definition, and classification of sūtras originated within the Sanskrit grammatical tradition. First, Pāṇini wrote the Aṣṭādhyāyī sūtras for Sanskrit grammar, then Kātyāyana wrote a vārtikā, or a supplementary work, intending to fill any lacunae. Patañjali followed, composing a detailed commentary on the sūtras, called Mahābhāṣya. A small number of rules (sūtras) in the Aṣṭādhyāyī lay down important principles of interpretation (paribhāṣā), which are then to be applied universally, overriding any contradictory statements. Kātyāyana further added many analogous principles, as did Patañjali. Such rules are called paribhāṣās or paribhāṣā–sūtras.

Generally, there are three types of paribhāṣā statements:

Out of these, the third category of paribhāṣā is specific to grammar alone, while the first two can be used to understand and interpret scripture. Śrī Jīva Gosvāmī’s analysis of chapter three of the First Canto of the Bhāgavata is based on some of these paribhāṣās from Sanskrit grammar. Brevity is the soul of a sūtra, as understood from its definition:

“Those well-versed in the science of sūtras affirm that a sūtra is composed of a minimum number of syllables, is unambiguous, conveys the essence, has universal applicability, is devoid of unnecessary words, and is faultless in composition.”

Elsewhere, sūtras are defined as follows: “The learned say that sūtras are concise, convey the intended meaning, employ words with a minimum of syllables, and thoroughly embody the essence.”

Bearing in mind the definition of a paribhāṣā as “a guiding principle laid down where none existed before,” Śrī Jīva Gosvāmī identifies verse 1.3.28 as a paribhāṣā–sūtra. In this case, there was no rule prior to this verse by which one could distinguish the aṁśa avatāras from Svayaṁ Bhagavān. This verse now specifies the distinction. In the given list of avatāras, all others are aṁśa manifestations of the Puruṣa, but Kṛṣṇa Himself is alone Svayaṁ Bhagavān.

A rule such as this needs to be stated only once and is not in need of further repetition. For example, the paribhāṣā–sūtra, “In case of conflicting rules, apply the one which is subsequent in order” (vipratiṣedhe paraṁ kāryam, Pāṇini 1.4.2), is stated only once by Pāṇini, and yet its application extends throughout the entire book. The same is true of Bhāgavata verse 1.3.28. It is established as the guiding principle for interpreting the rest of the text and for settling any apparent conflicts between oppositional statements. A paribhāṣā is comparable to an emperor whose authority is final. Hence, this statement cannot be understood as a guṇānuvāda (a type of artha-vāda).

In Tattva Sandarbha (Anucchedas19–23), Śrī Jīva Gosvāmī established that the self-disclosure of the Absolute (tattva) in its completion is available only from the Bhāgavata. Consequently, this paribhāṣā rules over all other conflicting statements found not only in the Bhāgavatabut also those found in other scriptures.

Śrī Jīva also calls this verse a pratijñā, a formal declaratory statement. A pratijñā is a hypothesis or an express principle found in canonical, philosophical, and grammatical works. As an example, there is paribhāṣā–sūtra121 established by Vyādi: pratijñānunāsikyāḥ pāninīyāḥ. In Pāṇini’s sūtras, a nasalized vowel is considered an “it” and is, thus, dropped while using it to form a verb. But the nasalized form is not always written in the sūtras. When it is not written, it can be known only from convention. So, even though it is not found in written form, it is to be understood because of Pāṇini’s pratijñā.

Śrī Jīva Gosvāmī gives an example of a pratijñā from Vedānta. In Bṛhad-āraṇyaka Upaniṣad 2.3.3, it is said, “Vāyu (air) and antarikṣa (space) are immortal.” If this were so in an unconditional sense, then vāyu and antarikṣa, being non-originated, would exist distinct from Brahman and, hence, beyond the purview of knowable objects. This, however, would contradict the proposition, “By knowing the ātmā all this becomes known” (BAU 2.4.5), and, “All this is that very ātmā” (BAU 2.4.6). The universal proposition (pratijñā) that “everything becomes known by knowing the ātmā” leads to the conclusion that the ātmāis both the material and efficient cause behind everything. An effect is known accurately only through knowledge of its cause. Therefore, it is necessary to interpret the immortality of vāyu in conformity with this proposition. This interpretation is also supported by statements from other Upaniṣads, such as, “My dear boy, prior to all this, there was only this sat [i.e., Brahman], which is one without a second” (Chāndogya 6.2.1).

In the beginning of the second chapter of Bṛhad-āraṇyaka Upaniṣad, the brāhmaṇa Gārgya approached King Ajātaśatru and promised to teach him the truth regarding Brahman. At first, Gārgya was proud of his learning, but he failed to satisfy the king and finally accepted the latter as his teacher. King Ajātaśatru then began to instruct Gārgya in the knowledge of Brahman.

Since the context concerns the knowledge of Brahman, also referred to as ātmā, the two statements— “by knowing the ātmā, everything becomes known” (BAU 2.4.5), and “all this manifest world is the ātmā” (BAU 2.4.6)—are in consonance with the proposition and, hence, will override any assertions to the contrary. Consequently, any statement that vāyu is immortal needs to be interpreted in light of the above proposition. This indicates that vāyu is immortal for one life cycle of Brahmā, not unconditionally. Other scriptural affirmations can also be found to support the proposition, such as Taittirīya Upaniṣad (2.1.1), “From that ātmā [Brahman] sprang ākāśa, and from ākāśa appeared vāyu.”

The power of a formal declaration (pratijñā) to override other statements is also discerned in Vedānta–sūtra 2.3.5, “The proposition (pratijñā) enunciated at the beginning of chapter 6 of Chāndogya Upaniṣad can stand uncontradicted only if all effects are accepted as nondistinct from Brahman, as evidenced from the revealed words of scripture (śabda),” pratijñā’hānir avyatirekāc chabdebhyaḥ.

In the light of all this, Śrī Jīva Gosvāmī affirms that kṛṣṇas tu bhagavān svayam (SB 1.3.28) is a pratijñā statement. Therefore, other statements found either in Śrīmad Bhāgavata Purāṇa or any other scripture that contradict Kṛṣṇa as Svayaṁ Bhagavān must be interpreted in the light of this pratijñā. The reason being that the author of all the scriptures, such as the Vedas, Purāṇas and Itihāsas, is Śrī Vyāsa, who is beyond any confusion about the Absolute Reality. There has to be conformity in his writing. It is not possible that he would contradict himself in different scriptures. Thus, on the basis of kṛṣṇas tu bhagavān svayam, which is the paribhāṣā sūtra and a pratijñā, it is concluded that Kṛṣṇa is neither an avatāra nor avatārī, the source of the avatāras, but beyond both. He is Svayaṁ Bhagavān, the original Supreme Person. 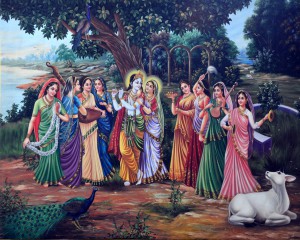 Note: Even though Jīva Gosvāmī elsewhere mentions Kṛṣṇa as avatārī as well, we avoid mentioning it in this article to make a clear distinction between Him and Garbhodakasayi Viṣṇu, who is also avatārī. If we use the term avatārī for both of them, one may mistake one for the other and think that there is no distinction between them, but the whole purpose of this article is to show that Kṛṣṇa is beyond all other manifestations of God, and that is the meaning of Svayaṁ Bhagavān. It is an attempt to help readers understand the usage of the word avatārī and avatāra in proper context.