Home  |  The Purpose of Vedanta Sutra

The Purpose of Vedanta Sutra

September 4, 2011Audio / Video SnippetsPhilosophyComments Off on The Purpose of Vedanta Sutra

India has a tradition that any great acarya, in particular a founder of a particular sampradaya, had to write commentaries on Vedanta Sutra, the principle Upanishads, Bhagavad Gita, and Vishnu Sahasra Nama. They had to show that their philosophy was based on these four pillars …

India has a tradition that any great acarya, in particular a founder of a particular sampradaya, had to write commentaries on Vedanta Sutra, the principle Upanishads, Bhagavad Gita, and Vishnu Sahasra Nama. They had to show that their philosophy was based on these four pillars. The Upanishads or sruti are called the cream of the Vedas. They are the topmost authority which is considered to have emanated from the mouth of the Lord himself. Vedanta Sutra is the logical explanation of the Upanishads.

The Upanishads speak on various different topics. It is very difficult to figure out a conclusive meaning, since there is no systematic presentation. Moreover, they can be interpreted in many different ways. Sanskrit itself has the ability to give different meanings to a sentence. On top of that we are dealing with the human mind which is expert in speculating. These two factors combined gave rise to various schools of thought.

Therefore Vyasadeva composed the Vedanta Sutra in an attempt to find a conclusive thread of philosophy in the Upanishads and to give a systematic presentation. Before him many other people have tried to bring out some coherent philosophy, but it appears that their work was not very authoritative, and therefore it did not survive. All is left is their names. When Vyasadeva’s Vedanta Sutras appeared all other attempts became futile in comparison. The Sutras became the final conclusion of the Upanishads. Some of these previous opinions have been refuted there.

Later it became a trend that everyone had to ground their philosophy in the Vedanta Sutras which only then became an authoritative explanation of the Upanishads. In India things could survive if they were based and found their source in the sruti. Otherwise people would always attack. Since Vedanta Sutras is giving the essence of the Vedas, everyone wanted to give their philosophy on that basis. Therefore we have many commentaries of these Sutras, the oldest known one from Shankaracarya. Before also many commentaries were written as Ramanujacaraya has mentioned, but they are not available any more. Some of them have been refuted by Shankaracarya.

After Shankaracarya, Ramanujacarya, Madhvacarya, Nimbarka and Vallabha wrote their commentaries on these sutras and refuted the explanations of Shankaracharya. Chaitanya Mahaprabhu did not comment on the Vedanta Sutras, nor did he encourage it because the Sutras are liable to misinterpretation which he pointed out in his dialogue with Sarvabhauma Bhattacharya while the latter was teaching him Vedanta Sutra based on Shankarara’s explanations.

Happiness in this world is not lasting, and always mixed with suffering. There is always an undercurrent of misery. Theology is more practical and popular than the impractical metaphysics of Vedanta Sutras because people want to put their faith in something and perform an activity which can give solace to their disturbed mind.

The Vaishnava acaryas therefore brought out devotion to Lord Vishnu from these sutras, which is more practical. Even if people didn’t know the sutras they were able to perform devotion and get some benefit from that. 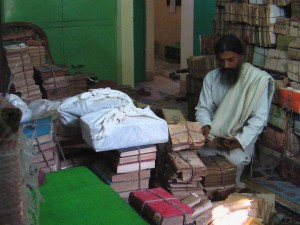