Home  |  The Place of Women in the Bhakti Movement

The Place of Women in the Bhakti Movement 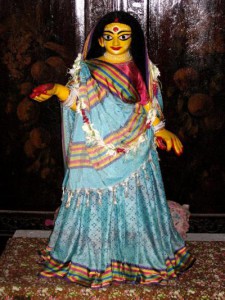 Question:  I personally appreciate the role of women within the bhakti movement in general and within the Vaiṣṇavism in particular. But sometimes I wonder where is the living spirit of Jāhnavā Mātā, now? Currently, who is the most representative gurvī in Gauḍīya Vaiṣṇavism?

Answer: Why limit this question only to Jāhnavā Mātā? Where is the living spirit of Nityananda? Give me a living example.

Go and see in the temple who is doing more service, the women or the men. There you will see the living spirit of Jāhnavā Mātā.

Question: I don’t think there is any Gauḍīya Vaiṣṇava branch striving to investigate, remember or revive her legacy.  How does the figure of a sublime female leader disappear without leaving clear traces of her passage through this world? Is it fate that Vaiṣṇavism will be marked only by the fevered male preaching from now on?

Is there any female ācārya in the bābājī-paramparā? How many gurvīs exist in its disciplic succession? Throughout the world, the leadership of religious institutions almost always oozes androgens. It is a harsh reality.

Answer: In our own disciplic succession there are four woman acaryas. Women usually don’t take to the renounced order of life because it is not very suitable for their psychology. The nature of men and women is different. After the Women’s Liberation movement, both men and women want to erase this distinction. This is what they think is the meaning of equality. However equality is not at the level of body and mind. Obviously the male body and mind are different from the female. I am sure you know that the body is the gross manifestation of the subtle mind.

There is no restriction for a male or female to attain the ultimate goal of life, but one must use the mind-body complex one has at present. This is one of the essential teachings of BG which people often miss.

There is no question whether women become guru or not, or whether they have the adhikara to become a pure devotee of the Lord.

Somehow at present we think that if a woman does the same as a man and competes with a man, she is equal to him. I consider this as the basic flaw in the woman liberation movement. I agree that when it comes to certain legal issues, such as voting rights or getting the same salary for the same job, there should be equality in that. But because men join the army, should women also do that? Will that be the emancipation of women? To me that is a misconception. In the history there may be examples of some very chivalrous ladies who fought wars, leading big armies, but that is not suitable to the nature of most women.

Similarly, there may be examples of women becoming great acaryas, having disciples, but it is not really the nature of a prototype woman. At present women may be more like men because of the idea of competing with men in every field, and thus they may also desire to be acaryas, but then they also have to have the requisite qualification for that.

In India, at present there are many female gurus. Amritananda Mayi is one well-known example. So in Gaudiya Vaishnavism also, if there is some illustrious woman, no one should oppose her. In Vrindavan there are many ladies who are giving Bhagavata kathas like any man and they are very popular. Even young girls are taking to this profession. One example is Devi Citralekha. She is a young girl in her teens and has a big following. In fact at present her Bhagavat saptaha is going on in Foglashrama in Vrindavan.

Another example is Sadhvi Ritambara, who has probably the biggest ashram in the Vrindavan area, called Vatsalya-grama.

In the past there were not so many examples, so you have only quoted two names.  Probably there are more now than at that time.

Answer: Celibacy is called brahmacarya in Sanskrit. Originally the word refers to a student who studies the Vedas under the guidance of a guru. During the study period, one was expected not to have any sexual relation, because it is a distraction for the mind, and such distraction makes the mind incapable of understanding. Originally, boys and girls both studied the Veda together. There is a verse which says,

This means women also lived like brahmacari boys and studied the Vedas, but later on, this practice was stopped and girl stayed at home and studied there. The exact reason why this changed is not known, but my guess is that it is probably related to the curse of Indra. In any case, a girl, whether she studied at the gurukula or remained at home, was expected to remain celibate like the brahmacari students. This is also understood from the following statement of the Atharvaveda 5.18:

“An unmarried celibate girl seeks a young husband.” After the girl was married, she was expected to have sexual relationship only with the husband and this was also considered as being brahmacari, or celibate. There is a very popular verse in India,

“One should remember every day the five virgins, namely Ahalya, Draupadi, Sita, Tara, and Mandodary. Remembering them destroys one’s sins.”

All the five women were married, in fact Draupadi had five husbands, but they had been referred to here as virgin, kanya, because they were chaste wives.

Ayurveda says there are three pillars of heath, upastambha, according to Caraka Samhita, namely food, sleep, and celibacy. While mentioning these three, Caraka Samhita does not say that this is only for men and not for women, nor does it say that a woman’s health only depends on the first two. Moreover, if men are supposed to be celibate and not women, with whom should they have sex? I don’t think I want to speculate on this.