Home  |  The Meaning of the Word Yoga

The Meaning of the Word Yoga

August 14, 2011Audio / Video SnippetsPhilosophyYogaComments Off on The Meaning of the Word Yoga

The word yoga has two somewhat different meanings. One meaning is to unite, the other meaning is to be distinct from everything else, thus to disunite. Patanjali, the famous author of the “Yoga Sutras”, uses the second meaning when he speaks of  “yogas citta-vritti-nirodha“. Here yoga means to terminate all of one’s thoughts, which means not feeling anything externally. Yoga philosophy describes the mind, particularly the citta, as mutable. The word citta is usually translated as mind or heart, a very subtle object. When it perceives something it takes the shape of that object, and the object reflects into the self. The self does not directly come into contact with anything externally. Only the senses come in contact with their objects, and then the mind undergoes a transformation called vritti. Whenever we perceive something our mind undergoes transformation or modification. This is how we come to know or feel anything. This keeps our awareness focused on objects other than ourselves. 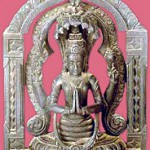 Patanjali says that we should bring an end to these modifications. When there are no modifications or citta-vrittis, we are not disturbed or carried away by anything. The soul becomes aware of itself.  The soul does not experience anything else, it has become disunited. So although yoga is considered as union, in this context it means the opposite, disunion. At present the soul is united with something external. Yoga wants us to give up this relation with external sensations. In the highest stage of yoga, samadhi, there is no sensation of the external world. You are situated in yourself, being who you are.

The specialty of bhakti yoga is that it is both the means as well as the end. Karma yoga is based on knowledge of karma and devotion to the deity. In the same way jnana yoga also depends on certain actions and devotion to the Absolute. Bhakti is action in devotion accompanied by the knowledge of the Supreme God. It is only by the path of bhakti that ultimate welfare is achieved.  Karma and jnana are ineffective without bhakti. Bhakti however is not dependent on either karma or jnana.