The Importance of Nāma Kīrtana – 2

Śravaṇam precedes kīrtanam and smaranam because it is impossible to remember or glorify something one has not yet heard about. Despite this practical primacy of śravaṇam, kīrtanam is actually of primary significance and importance, and, therefore special attention should be given to its practice.

The Importance of Kirtan 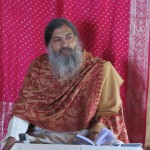 Śravaṇam precedes kīrtanam and smaranam because it is impossible to remember or glorify something one has not yet heard about. Despite this practical primacy of śravaṇam, kīrtanam is actually of primary significance and importance, and, therefore special attention should be given to its practice.

One can perform kīrtanam by oneself, but doing it in the company of a great personality is a greater boon. If one performs kīrtanam by oneself, one should be in the internal presence of great personalities like Śrī Caitanya, His associates, and Śrī Śukadeva Gosvāmī. One should then perform kīrtanam in the mood of being their follower. It is still better if great personalities are actually present. If one has the rare fortune of hearing the kīrtana of a great devotee, one can certainly do kīrtanam in a proper mood even if alone. [In our experience, the personal presence of a great devotee performing kirtan has a far greater effect than simply listening to a recording.]

Kīrtana is best performed loudly. “Loudly” here means audible, so that others in one’s vicinity can hear it, but the idea should be applied contentiously. These days in Vrindavan, for example, it has become a custom to install loud speakers on top of temples or āśrama buildings to amplify kīrtan. Such kīrtan often creates the disturbance to others who may also be engaged in their own kīrtanam, smaranam, or other acts of devotional service. We should not be “loud” as an excuse to force others to listen to our kīrtan. Kīrtanam should be done as a service to Bhagavān, not to show off to the neighbors. After all, Śrī Caitanya Mahāprabhu, who appeared to purify the people of Kaliyuga, gave the following principle for performing kīrtan.

“One should regularly do kīrtan of the Holy Name of the Lord in a humble mood, considering oneself lower than a blade of grass, being more tolerant than the tree, while giving respects to others and not expecting to be honored by them.” (Śikṣāṣṭaka 3, CC. Ādi 17.31)

It is well known from the Vedas and Purāṇas that kīrtanam is Bhagavan’s supreme grace on those who are low-born, misbehaved, or very poor and, therefore, cannot engage in religious activities like yajña, etc. (Poverty is an issue because religious activities sometimes require significant wealth).

“In Kaliyuga, religious activities such as penance, yoga, the study of the Vedas, and execution of yajña, do not bring proper results, even if done by experts.“

As is further stated in Śrīmad Bhāgavatam,

“O King, learned scholars conclude that the kīrtan of Hari’s Names should be performed by people who are  dejected because of being unsuccessful in their material pursuits, and by all sort of yogis who desire freedom
from fear.” (SB 2.1.11)

The implied meaning of the verse is that nāma kīrtanam should be performed by everyone, whether they are engaged in pure devotion, mixed devotion, yoga, jñāna or karma. In Kaliyuga, kīrtanam is particularly important. It is a blessing on fallen people, because it easily grants the results of all other religious activities. In Kaliyuga, Bhagavān is specifically pleased by kīrtanam. Although the greatness of kīrtanam is described in relation to Kaliyuga, it is not limited to Kaliyuga, just as other types of bhakti are also not limited by time or place. The power of kīrtanam remains the same in each yuga, but in Kaliyuga, out of compassion, the Lord has specifically glorified it, so that people who are not qualified for other religious practices may become inspired to practice kīrtanam and attain the highest possible goal in human life.

“[In the Age of Kali, Bhagavān appears within this world] with a non-blackish complexion and constantly sings or describes the names of Kṛṣṇa, accompanied by His associates, servants, weapons and confidential companions. Those endowed with discriminating wisdom worship the Absolute in this form primarily through the sacrifice of complete kīrtanam, involving the totality of one’s being.” (SB 11.5.32)

“O king, although Kaliyuga is an ocean of defects, it has still one great quality: Just by performing kīrtana one can become free from material bondage and attain the supreme abode.” (SB 12.3.51)

Such prescriptions are also found in many other scriptures:

“In Kaliyuga only the chanting of the Name of Lord Hari brings perfection. No other means is efficacious.”

What and How to Chant in Kirtan

The Lord’s names are mentioned in various scriptures, and in nāma kīrtanam one can use any of these. However, the most efficacious nāma kīrtanam glorifies the names of Bhagavān found in Śrīmad Bhagavatam. It should be understood that kīrtanam also includes expressions of humility, expressions of one’s spiritual goal, and recitation of prayers to Bhagavān.

Kīrtanam is the recommended process for everyone in the age of Kali and does not require any specific qualification, such as birth, gender, age, etc.. However, it must be done with the proper mood, carefully avoiding offenses against the Name.

1.    To criticize the Vaiṣṇavas.
2.    To consider the name of Lord Śiva and others as independent of Śrī Viṣṇu.
3.    To insult one’s guru.
4.    To criticize the Vedas and other scriptures which follow the Vedas.
5.    To consider the glories of the name of Lord Hari as exaggerated praise.
6.    To misinterpret the glories of the Name.
7.    To commit forbidden acts on the strength of the Name.
8.    To equate the Name with other pious activities.
9.    To give instructions about the Name to someone who has no faith, is not devoted to the Lord or is disinterested in hearing about it.
10.   To not have attraction to the Name even after hearing its glories.

The only atonement for offenses against the Name, as stated in Padma Purāṇa itself:

“Only continuous chanting of the Names of the Lord can repair the effects of offenses against the Name.”

Therefore, it one has committed offense against the Name, one should engage all the more continuously in nāma kīrtana, to please to Name. The Name is also a person and thus can be offended and be placated like a person. An offense to the Name is cleared only when the Name is placated by the sincerity of the chanter.

If one has offended a Vaiṣṇava, the easiest way to become free from that offense and please the Name is to ask for forgiveness from that Vaiṣṇava. It is a general principle that the offense will be cleared if the offended person forgives. This is understood from the story of Durvāsā Muni who offended King Ambarīṣa great Vaiṣṇava, described in the 9th Canto, Chapters 4 and 5 of Śrīmad Bhāgavatam. Although Durvāsā went to Lord Viṣṇu to become free from the reaction of offense, Lord Viṣṇu directed him to return back to Ambarīṣa and ask for forgiveness.

It is also stated in Nāma Kaumodi, “One becomes free from the offense against a Vaiṣṇava either by facing its outcome or by the grace of that Vaiṣṇava.” This principle is also illustrated in the story of Dakṣa’s sacrifice. After offending Lord Śiva, Dakṣa realized his gross mistake. Trying to spare himself from the reaction of his offense he spoke to Lord Śiva as follows:

“Not knowing your greatness, I insulted you with the arrows of my abusive words in the assembly of great sages. Because of this heinous criticism I am gliding down to hell. You are supremely gentle and thus you have saved me by your compassionate glance. May you be pleased by your own good deeds.“ (SB 4.7.15)

Thus, the conclusion is that one should engage in nāma kīrtana while carefully avoiding the above stated offenses, and thus attain perfection in bhakti. This is the essence of Prahlāda’s reply to his father.

As an afterthought, one may wonder if Prahlāda committed the ninth offense by giving this instruction to his father, who was opposed to Viṣṇu and thus had obviously had no inclination to hear about the subject? No, Prahlāda did not give his father an unsolicited instruction, he simply replied to his father’s question about the progress of his education.