The Importance of Nāma Kīrtana – 1 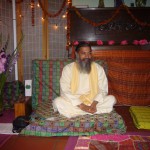 In the 7th Canto of Śrīmad Bhāgavatam, Śrī Prahlāda speaks two verses to his demoniac father Hiraṇyakaśipu, which, in brief, contain the essence of the primary forms of bhakti. In the following we will discuss an explanation of these verses based on the commentary of Śrī Jīva Gosvāmī.

Śrī Jīva Gosvāmī defines each of the nine limbs of devotion enumerated here.

Hearing (śravaṇam) entails putting one’s ears into contact with words that describe Śrī Kṛṣṇa’s name, form, attributes, and his divine sports with his associates (līlā). Jīva Gosvāmī specifies that the sequence properly begins hearing Krishna’s name and ends with hearing Kṛṣṇa’s līla. He explains that the same order must also be followed in chanting (kīrtanam) and recollection (smaranam).

Singing or chanting His glories (kīrtanam) similarly means causing ones tongue to vibrate words describing Śrī Kṛṣṇa’s name, form, attributes, and his divine sports with his associates (līlā).
Remembrance or recollection (smaranam) means thinking about Śrī Kṛṣṇa’s name, form, attributes, and associates or līlā. Pāda-sevanam (lit., “service to the feet”) refers to performing humble service for Kṛṣṇa’s deity, like cooking, making garlands, sweeping the temple, etc. Worship (arcanam) refers to worshiping Kṛṣṇa’s deity on the altar, with arati and so on. Offering obeisances (vandanam) means bowing down in front of the deity. Servitude (dāsyam) means to identify oneself as a servant of Kṛṣṇa. Friendship (sakhyam) means to think of Kṛṣṇa’s welfare, in the mood of a friend. Finally, self-surrender (ātma-nivedanam) means to completely submit one’s whole body-mind complex and the pure self to Kṛṣṇa.

By using the word uttama, Śrī Prahlāda implies that there are three types of “educated people.” The best type (uttama) performs these nine aspects of devotion directly to Bhagavān Śrī Kṛṣṇa (bhagavaty addhā), and only for His satisfaction, not to gain something selfish in dharma, artha, kāma, or mokṣa. One’s education is middling (madhyama) if he performs such devotions with vested interests or neglects these nine primary devotions in favor of indirect devotion through yoga, jñāna and karma. One’s education is uselessly poor (kanistha) if one does not engage in any devotion towards Viṣṇu at all.

The definition of pure devotion is given in Gopāla Tāpanī Upaniṣad:

“Bhakti is service to Kṛṣṇa by giving up all attachments to any object in this world or to any material destination in the next life, and by fixing the mind on Kṛṣṇa. This bhakti is also called naiṣkarmya.”

It is not necessary to execute all these nine facets of bhakti. One can attain perfection (prema bhakti) even by practicing only one of them, or by practicing some combination of them, according to ones natural faith and preferences. That one can perform these practices according to personal choice is evident from sage Āvirhotra’s recommendation to worship the particular form of Bhagavān one prefers (mūrtyābhimatayātmanaḥ, SB 11.3.48).

When Prahlāda enumerates nine limbs of devotion, he does not limit bhakti to only these nine limbs. Rather, his intention in specifying these nine is that nothing outside the path of bhakti should be executed and not the processes of other paths. There are other limbs of bhakti, but they can be categorized as subparts of these nine categories.

Although one can attain perfection by following any limb of devotion, in any order, still, as briefly mentioned earlier, Śrī Jīva Gosvāmī specifies that bhakti is most effective if śravaṇam, kīrtanam and smaranam are executed in a specific sequence.

Within each, there is a secondary sequence:

The proper sequence of all practices is:

Thus, the foundation is nāma śravaṇam and the culmination is līlā smaranam. If one’s heart has become pure by hearing and chanting the names of the Lord, one can then engage in nāma smaranam, while still continuing to engage in nāma kīrtanam. In this way, the preceding practice remains and supports the succeeding practice.

It is best to hear (śravaṇam) from great devotees of the Lord. Such śravaṇam is supremely pleasing to the devotees who have attained taste (ruci). It is only by supreme fortune that one gets the opportunity to hear the name etc. of Śrī Kṛṣṇa from the mouth of a great devotee (mahābhāgavata).

“O you devotees who are able to relish divine taste (rasikās) and who are able to experience transcendental states of awareness and love (bhāvukās), drink again and again—up to liberation and beyond—the divine rasa known as Śrīmad Bhāgavatam, the mature fruit of the desire tree of Vedic literature. Being fully ripened and overflowing with immortal nectar, it descended unbroken upon the earth, issuing from the lips of Śrī Śukadeva Gosvāmī.” (SB 1.1.3.) 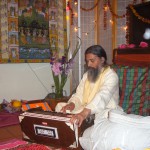