Home  |  The Importance of Human Birth

The Importance of Human Birth

Among all species of life, human birth is very rare and important. In Śānti-parva of Māhābhārata (chapter 180), the great devotee Bhīsma, one of the twelve Mahājanas, tells King Yuḍhisthīra a story to show the significance of its importance.

He describes that long ago, there was a very austere brahmaṇa, named Kāśyapa. He was very religious and had an introverted disposition. Once when he was walking, a proud vaiśya came from the opposite side, riding on a chariot. Being intoxicated by his wealth, this vaiśya disregarded the brahmaṇa and knowingly threw him off the road by hitting him with his chariot. The brahmaṇa was hurt, not only physically, but also emotionally. He felt very humiliated and thought that because he was poor, his life was a waste. He had no caliber for, or interest in earning wealth, yet he realized that people give no respect to a brahmaṇa like him. Being frustrated, he decided to commit suicide.

When Indra understood the intention of the brahmaṇa, he took pity on him. To instruct him, he appeared in the form of a jackal and began instructing the dejected brahmaṇa. The jackal spoke to him as follows:

“O brahmaṇa, all living beings aspire to attain a human body, and among human beings, the body of a brahmaṇa is very praiseworthy. You are not only a human being, but also a brahmaṇa and on top of that, you have studied the Vedas. Having attained such a rare opportunity, it is highly improper to consider it worthless and plan to commit suicide. I consider the human birth as very fortunate because I wish to have that myself. Just as human beings aspire for wealth, we animals wish to have hands. We do not consider any other gain superior to having hands. O Muni, many times while wandering in the forest, the thorns from bushes get stuck in our body. We feel great pain but because we do not have hands, we are unable to pull them out. Similarly, flies, mosquitos, fleas, and other such insects bite our bodies and we have to just tolerate it. Not having hands, we are unable to produce houses as humans do, to protect us from heat, cold, rain, and hailstorm. We cannot sew cloth to cover our bodies, nor can we eat properly. While grazing, sometimes sharp grass pierces our cheeks and gums and we suffer greatly. Human beings can domesticate animals and use them for plowing land or for harnessing (yoking) them in a cart. They can ride on them and thus enjoy, while we have no such facility. Even while suffering like this, I do not commit suicide, knowing it well to be a very sinful act. I know that by committing suicide I will glide down into an even lower species of life.

You should realize how fortunate you are because you have this most rare form of a human being. You are lamenting because of poverty, but you must know that wealth alone cannot give happiness. In this human body you have the gift of intelligence. You should use your intelligence not for earning wealth, but to become enlightened. If one does not work for spiritual improvement, then one is misusing the human form of life and ultimately one will be born in a subhuman species. You may also know that even among human beings, there are some who are handicapped. Some are blind, others are deaf or lame. But you, o brahmaṇa, have a healthy and a complete body. You should use it for becoming free from material conditioning, then you do not have to suffer in humiliation from rich or proud people. Material happiness and suffering come as an outcome of one’s past karma. Tolerate it and practice devotion to God assiduously.

In my past life I was a human being and proud of my intelligence. I used to argue with brahmaṇas and criticize the Vedas. I had no respect for the scriptures and considered empirical experience and logic as supreme sources of knowledge. I was atheistic and foolish, but thought of myself as a learned and wise man. As a result of such behavior I have been born as a jackal now. In this jackal body I cannot engage in any scriptural study or devotional practice. I very much aspire to be born as a human being, but that is not within my control.” 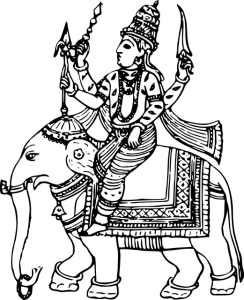 When Kāśyapa Muni heard these words of the jackal, he was very astonished. By the eye of wisdom, he could then understand that this jackal was Indra. He paid respect to him and thanked him for this wonderful advice. Thus the brahmaṇa gave up the idea to commit suicide and went to the forest to meditate on God.

This is a simple story that shows the superiority of the human body with respect to the hands, but as human beings we have much more capabilities in the form of speech and discriminating faculty (buddhi). We should not undermine these faculties, but we should utilize them for the ultimate purpose of life. According to Śrīmad Bhāgavad Purāṇa, which is the last and topmost work of Śrī Veda Vyāsa, the purpose of life is to know the Absolute Reality, and tattva-jijñāsa, and not just strive to accumulate wealth throughout one’s life.