Home  |  The Functions of VATA – Emotional and Physical Health

The Functions of VATA – Emotional and Physical Health

By Satyanarayana Dasa: According to Ayurveda, there are three vital bioenergies in relation to the constitution of the physical body, which are called doshas. They are vata, pitta and kapha. Here, we want to take a closer look at the function of vata. The word vata is derived from the Sanskrit root va, which means to blow, to go, or to move. Thus vata means that which blows around or moves. It denotes wind or air, but in Ayurveda it has a special meaning.

According to Ayurveda, there are three vital bioenergies in relation to the constitution of the physical body, which are called doshas. They are vata, pitta and kapha. In the following, we want to take a closer look at the function of vata. The word vata is derived from the Sanskrit root va, which means to blow, to go, or to move. Thus vata means that which blows around or moves.  It denotes wind or air, but in Ayurveda it has a special meaning. It is responsible for all movement in the body, physiological as well as psychological. Another word commonly used for vata is prana, usually translated as life air. Vata as a dosha is not air; rather, it is subtle, like electric energy. When aggravated, however, it causes an increase or decrease in the bodily airs. Just as electric energy flows through a medium, wind may be considered as the carrier of the vata dosha.

Prana sustains life. We cannot survive without it. Prana is thus called the life air or life force. It pervades the whole universe and is specifically prominent in open areas, near lakes, rivers, seas or forests. Prana has a great role to play in our physical and mental health. Our gross physical body contains two subtle bodies, the pranic body and the psychic body. The pranic body consists of the five divisions of prana called prana, udana, samana, apana and vyana. Prana causes respiration and circulation in the body. It also governs all of the motor and sensory functions, aids in digestion, and governs the functions of the mind, memory, thoughts and emotions. The psychic body consists of the mind, intellect, ego and the senses.  Beyond the psychic body resides the atma or purusha, which is the source of consciousness in the body, or the conscious living entity. Atma makes the psychic body conscious, which in turn energizes the physical body. All of this happens with the help of prana.

According to Taittriya Upanisad (2.2), prana, is the link between the gross physical body and the mind or psychic body. Prana carries the consciousness of the atma into the mind and physical body. Therefore, our minds and bodies need prana to function properly, or rather, to function at all. There are two ways to get prana; one is through the lungs, which extract prana from the air we breathe in, and the other is through the colon, which extracts prana from digested food. A person’s health depends upon the absorption of prana into the body by these two processes. Good absorption of prana into the body makes one feel energetic and enthusiastic. Inadequate absorption gives the opposite effect. To absorb prana well, one must breathe properly, in particular fresh air, and eat good quality fresh organic food. Food that is over-processed, refrigerated, frozen, stale or canned contains very little prana. One needs to eat a lot of it to obtain the required amount of prana.

The Basis of Everything in the Universe

Prana is one, but is divided into two when we breathe in through our nostrils. This bifurcation of prana is the basis of all duality in life. In the Vedas there is mention of soma (the cool, or feminine energy) and agni (the hot, or masculine energy). These two energies are the basis of everything in the universe. Prana stimulates these two energies within the body. The right nostril is related to the male energy, and the left to the female energy. When we breathe in through the right nostril, our left brain becomes activated. The left brain is logical, linear and methodical.  Similarly, when we breathe in through the left nostril, our right brain is stimulated, which is emotional and non-linear. Generally, our breathing is not completely balanced, i.e., one nostril is more open than the other. The breath cycle changes every 90 minutes.  Thus, although prana is one, it manifests a dualistic pattern in the human body.

Emotions are related to prana. They change with the movement of prana and vice versa. According to Ayurveda, our emotions influence the lungs, one of the seats of prana. When there is deep-seated grief and sadness, it affects the upper part of the lungs. Anger and hatred damage the middle part of the lungs.  And attachment and greed affect the lower part of the lungs. By controlling prana (pranayama), we can control emotions. Whatever we experience gets stored in the psychic body, and through meditation, one can clear up unhealthy emotions stored there. All the movements of prana in the body are governed by the psychic body. The movement of prana controls our voluntary and involuntary movements, as well as circulations within the body. We all breathe differently, think differently and have different desires. All of this is rooted in the psychic body, where our past karma is stored.  The past karma, called fate, manifests from subtle to gross through prana, and influences our life. By the control prana, one can thus influence one’s karma. 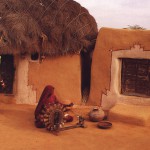 Meditation on God in a Mood of Devotion

Lord Kapila says that by controlling prana, a yogi can free one’s mind of impurities and become peaceful (S.B. 3.28.9, 10). Thus by control of prana, one can change one’s emotional and physical health. Our emotions have performed some useful service in the past; therefore we are attached to them. But now they may be unwanted and harmful, and so need to be cleared up. Otherwise they become a blockage to our health and happiness, both material and spiritual. First one needs to introspect and recognize such unwanted emotions, then observe them dispassionately while breathing harmoniously. Once they are visualized in this manner they will dissolve. In this way one can remain healthy by balancing one’s prana, and clear up the stored unhealthy emotions and traumatic experiences.

However, pranayama or yogic exercise alone cannot uproot the unwanted emotions. They linger on in seed form and will sprout again in a favorable environment. Unless one takes to loving devotion to God (bhakti yoga), the seeds of material desires and unwanted emotions will sprout again, even in a mind that has been purified by the process of pranayama (SB. 10.51.61). Therefore, not only is there a need to balance one’s prana but also to meditate on God in a mood of devotion. This is Krsna’s advice to a yogi (Bhagavad Gita 5.27-29).

Read also  about Pitta (Fire – The Transformational Energy of Life )