Home  |  The Functions of Paramātmā, Bhagavān, and Mahā-Viṣṇu

The Functions of Paramātmā, Bhagavān, and Mahā-Viṣṇu

Question: I´m experiencing some duality regarding the functional aspect of the Paramātmā. On one side we hear that his role as Antaryāmī is neutral; only a witness bestowing the proper fruits of one´s good or bad actions or in other words, an aspect of God more related to the world and the principle of karma/justice. On the other side we hear in texts like Śrī Caitanya-caritāmṛta that the guru manifests in a twofold way, externally as the śikṣā-guru and internally as the caitya-guru, and since the guru department as a whole is one mainly connected to the kṛpā–śakti agency (not justice) of Bhagavān (not Paramātmā), I wonder how to harmonize these two apparent contradictions. One more point/question; this topic arose since one devotee spoke about intuition, and some other devotee actually said intuition was Paramātmā guiding us. From this comment, some others thought: If Paramātmā is neutral how can He guide us in a “merciful” way or is that inner voice the bhakti-śakti that such devotee has already cultured? 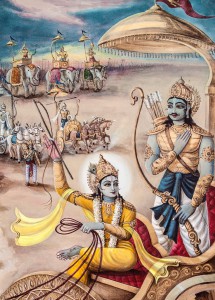 Answer: In Bhagavad Gītā, Śrī Kṛṣṇa says “samo ’haṁ sarva-bhūteṣu …”. In this verse Śrī Kṛṣṇa Himself is speaking of His two roles of being neutral or equal to all, without any bias towards anyone, and the other role of being a guide and thus becoming personally involved. But these two roles are for two different categories of people. For those who are not surrendered to Him, He remains neutral, as Paramātmā. But for those who take His shelter, He becomes personally involved. In other words, He as Bhagavān Himself takes over the function of Paramātmā and as caitya guru. So there is no duality or contradiction. As far as intuition is concerned, for non-devotees intuition is part of their thought-process, rising from their own citta. Paramātmā or Bhagavān has no direct involvement in it. In case of devotees, however, intuition may be guided by Bhagavān, depending upon the level of advancement of the devotee as well as Bhagavān’s personal will. When a devotee truly surrenders to Bhagavān, then Bhagavān also accepts him or her as His own. As Kṛṣṇa Himself tells Arjuna, “ye yathā māṁ prapadyante tāṁs tathaiva bhajāmy aham. “ Thus we should know that Bhagavān deals personally with His devotees and for non-devotees, He manifests His Paramātmā aspect.

Question: Is Mahā-Viṣṇu, from whom all the jīvas come into the material world and in whose body they take shelter at the time of cosmic annihilation, considered to be situated in the spiritual world?

Answer: Mahā-Viṣṇu is in charge of material nature but He Himself is situated in His own eternal potency. He is beyond the influence of anything material.

For more details and clearer understanding regarding the jīvas existence in the material world, please read my book “In Vaikuṇṭha Not Even the Leaves Fall”. I am also in the process of writing a separate book, entitled “Jīva Svarūpa” to clarify the position of the jīva.