Question: How detrimental is the regular association of non-devotees (in terms of family, and business associates)? And what is to be done about it?

Answer: It is not detrimental if you are fixed in your goal of devotion to God, rather you will influence them.

Answer: Any nondevotional enjoyment is detrimental. 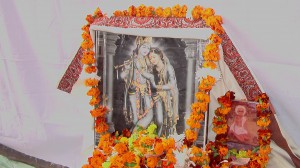 Question: I read how the male element is Purusa and Female is Prakriti in Ayurveda.  Does this mean that the sperm contains purusa and the female egg does not?  This would make sense since the sperm has mobility and the egg does not.  Does the sperm carry the purusha with it during conception?

Answer: Both sperm and egg have life.  When they combine then the purusha enters them.  So in a way the sperm acts as a purusha because it attracts the purusha.

Question: I also recall reading in Bhagavatam that from the Lord’s Genitals originate water, semen, rains and procreation. Would this mean that when male seed is spilled with intent and without conception it is a form of violence to the sperm itself by not allowing it to perform its natural function?

Question: By abstaining, does one derive any benefit from this and how so?

Answer: Yes, it benefits because you are not wasting your energy unnecessarily and you are gaining control over your senses. But it should not be repression.

Question: I read in the introduction of your translation of Jiva Gosvami’s Bhakti Sandarbha (which I am thoroughly engulfed in) that Jiva Gosvami and his associates were practicing ”Causeless Love” and their writings simply put this practice into Vedantic and Upanisadic language. This means that Jiva Gosvami’s writings do not ORIGINATE from the Vedas. So where did Jiva Gosvamis knowledge originate from?