Home  |  Relation between Jnana and Bhakti

Relation between Jnana and Bhakti

Answer:  The word jnana when used in relation to jnana-yoga or jnana-marga has a specific meaning. It is not to be understood in the sense of knowledge but experience of oneness with Brahman.  To have that jnana, a janan-margi has to practice bhakti to Krsna or Visnu as secondary to jnana.

Question: If he has to practice bhakti, the question comes up how can he practice bhakti if he is doing devotion with the objective of liberation? How can that be bhakti?

Answer:  It is sakama bhakti, kaivalya-kama to be exact. He performs bhakti as a means to achieve kaivalya or mukti.

Question: Can bhakti also be directed to the demigods?

Answer:  Primarily not. Bhakti in its primary sense is only to God. In secondary sense, bhakti can be for devas, for parents, for one’s country – deva-bhakti, pitr-bhakti, matr-bhakti, rastra-bhakti.

Question: Then it seems it is not bhakti, as it is kaivailya-kama and also not directed toward Krishna. Then how is jnana dependent on bhakti?

Answer:  Why is it not bhakti? It is not uttama-bhakti. Of course it has to be to Visnu-tattva. Only Visnu can give the result of jnana. Only He can give mukti, not even Shiva. Krishna says in Gita (14.25) that only by executing bhakti, one transcends the gunas of prakrti and becomes Brahman-realized.

Answer:  He reciprocates because jnanis are following a path prescribed by Him in shastra. They have respect for shastra. Otherwise, there was no need to propagate sayujya mukti. It is not unconditional love, but conditional. 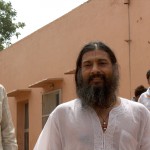 Answer:  Krishna says chaturvidhA bhajante mAm – four types of people worship Me. He says they are all udAra. He reciprocates so that people in general have faith in Him and worship Him. If they are not worshiping Him directly, then they can only get material results, not mukti. Jnanis can become successful only when they worship Krishna or Vishnu. If they do not worship Him, then there is no question of mukti.