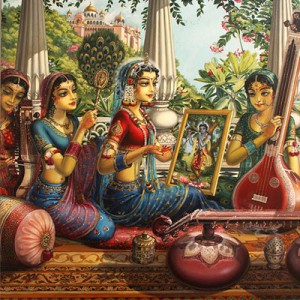 Question: When the atma attains Vaikuntha, he/she gets a spiritual form which is different from its form in this material world (1/10,000 the size of the tip of hair). How can we say that atma undergoes no modifications?

Answer:  Getting a spiritual body is not a modification of atma, just as getting a material body is not a modification. Modification is of two types. One is called vikara, like milk turning into yogurt. The other is called parinama, like a piece of gold being shaped into an ear-ring. In modern science these are called chemical and physical changes respectively. Atma does not undergo any of these two types of changes.

Question: I came across the section in the Govinda-bhashya to sutra 4.4.1. My question is that: In 4.4.1 Baladeva Vidyabhusana says the liberated soul is situated in its own (svena) svarūpa. He also says that if it accepts an additional form then the word ‘svena’ in the quote from Chāndogya Up. 8.12.3 would be useless. Then at the end he says that “those who say that the manifestation of the svarūpa is simply freedom from all sufferings which are impositions of material nature” are incorrect. He says that this is because it is heard that in mukti there is extreme happiness, as stated in rasam hy evāyaṁ labdhvānandī bhavati.

So Babaji Maharaja, how is it that after stating that this svarūpa is the manifestation of the already existing soul’s own svarūpa, which has eight-qualities and nothing additional, BV says about rasa which requires the entrance of bhakti in the soul? As we know, rasa requires two and thus indicates the influence of bhakti, which is Krishna’s svarūpa-śakti and thus external to the jīva.

Answer:  In the very beginning of his commentary to 4.4.1 he clearly says that the jiva attains this jyoti-rupa through bhakti which is endowed with jnana and vairagya. So your doubt is not clear to me.

Question: In the Govinda-bhasya to 4.4.1 Baladeva Vidyabhusana says that the jiva attains its own svarupa by attaining the param-jyoti by engaging in bhakti. My doubt is that we know that the spiritual svarupa (siddha-deha) is not inherent in the jiva but the jiva is blessed with it by the mercy of Bhagavan. So, in this sense the spiritual svarupa of the jiva is not inherent in it but is attained by Bhagavan’s mercy. Thus the siddha-deha is external to the jiva. But here Baladeva Vidyabhusana says that the svarupa which manifests on becoming liberated is not something external (agantuka) but this svarupa is already existing in the jiva and it manifests by sadhana.

So, Babaji Maharaja, as we know the siddha-deha is not a part of jiva’s identity, but is attained by bhakti-sadhana. So how to understand Baladeva Vidyabhusana’s commentary on 4.4.1 correctly? Please explain.

Answer:  Very good observation. The answer is that the meaning of the word “sva” here implies that the spiritual body that a mukta jiva gets is neither external to the atma nor is it created, as is the case with the material body. The spiritual body is siddha, “existing”, and it becomes one with the self. Therefore, the word udaya, or manifestation, is used. It manifests to the atma. There is no duality between the self and the body, as is the case during the conditioned state. This is the significance of the word “sva“.

Of course you can argue that the svarupa is already there in the atma and it just manifests. Such a meaning is also possible but it creates many philosophical discrepancies and thus is not acceptable. A verse can have various meanings, but we have to be consistent with the other parts of sastra. Sastra-sangti (scriptural consistency) is essential aspect of interpretation. For example, the word madyaji in Gita 18.65 can be translated “you drink liquor (madya) and eat goats (aji).” But such an interpretation is not consistent with other parts of Gita.

In Paramatma Sandarbha, Sri Jiva Gosvami explains that God has three distinct potencies, intrinsic, intermediary and external. He also defines the characteristic of atma in detail. He does not say that the siddha-svarupa is within the atma. Rather, in Priti Sandarbha he says that the siddha-deha is given by God when one becomes qualified to enter the spiritual world. This is also the experience of Narada, which he relates to Vyasa in verse 1.6.28 of Srimad Bhagavatam.

Question: Also, what are these eight qualities that a liberated soul has? They must be other than the qualities manifested by the influence of pure bhakti.

Question: Also, at the end of 4.4.3 BV says that the paraṁ jyoti mentioned in evam evaiṣa samprasādo’smāc charīrāt samutthāya paraṁ jyotir upasampadya svena rūpeṇābhiniṣpadyate sa uttamaḥ puruṣaḥ (Chandogya Up. 8.12.3) is the uttamaḥ puruṣaḥ (from the same verse above). Thus he says that the supreme light (paraṁ jyoti) is the supreme person (uttamaḥ puruṣaḥ) Lord Hari himself. Now, according to my understanding this is gramatically not proper. The uttamaḥ puruṣaḥ here is the liberated jīva. This claim is further supported by the introduction to the 4.4.8 saṅkalpād eva tac chruteḥ. In that BV again quotes from Chandogya Up. 8.12.3: sa tatra paryeti jakṣan krīḍan…… This quote immediately follows the words sa uttamaḥ puruṣaḥ quoted above. Now, BV takes this quote in 4.4.8 to mean that the liberated soul (denoted by sa) plays and enjoys, etc.

Answer:  What I can say about it is that in the beginning the word esa is used for the conditioned soul, and then sa uttama purusa is used.  The pronoun esa is used for something near and sa is used for that which is not near and not visible (paroksha). Thus it makes sense that esa refers to the individual self and sa refers to Hari, who is paroksha. Obviously Hari is param jyoti and it is only approaching Him that jiva becomes situated in his own svarupa.

Then comes the next doubt. Then by the above logic the sa in sa tatra paryeti etc should refer to  Hari. But such is not the case. Now the sa refers to liberated soul. Esa cannot be used for him anymore because he is neither near nor aparoksa. He is paroksha. Sa is used for paroksha nouns.  This interpretation is supported by the locative pronoun tatra. If the sa in sa tatra paryeti is taken to refer to Hari, then tatra would make no sense. Because then it would imply that Hari is enjoying there but suffers here. Since such is not the case, then sa can only refer to the liberated soul.

Question: I am having some confusion in trying to understand that the siddha-deha is non-different from the jiva.

Answer: You need to rise a little above material logic, otherwise you will keep having trouble.

Tatastha does not change into svarupa-sakti. But even before getting the siddha-deha, the tatastha becomes imbued by svarupa-sakti. That is called getting sthayi-bhava. The siddha deha is not a physical body as we have experience of. It is a bhava body. I am sure you have come across a statement somewhere that says that Srimati Radhika is Mahabhava-svarupa. Just brood over it a little bit.

So the tatastha who is imbued with svarupa-sakti, like an iron rod made red hot by putting it in fire, is now linked to a body consisting of svarupa-sakti. There is oneness because the sthayi-bhava does not make the tatastha feel that he is having something exterior in him. Does this make sense to you or still troubling?

Answer: Now you answer this question in light of what I have written above. Try to imagine you are made of iron put in a furnace. Then imagine you wear a dress made of flame. Would you feel different or one with the flame?