Questions on Indian Schools of Philosophy

Question:  I found your article on the Indian Schools of Philosophy very interesting and I have some questions for you. Did the six darshans evolve from one another? Or did they evolve or manifest separately?

Answer: They did not evolve from one another but independently. Of course, during their evolution each system influences the others. In India there is a system of purvapaksha or refuting the opponent’s view. Usually every system will refute the principle of other systems which is not acceptable to their own systems. Then there is counter refutation and couter-counter-refutation. This is how schools evolve or grow. In other words, there was always a dialogue among them.

Question:  The Vedas are eternal, so are the six darshans eternal as well?

Answer: The seeds of all schools can be traced back to the Vedas. In that sense they are eternal. But each school has been systematized by a particular sage. In that respect they are not eternal.

Answer: The classical Sankhya of Isvara Krsna neither accepts nor denies Isvara. But Sankhaya of Bhagavata Purana accepts Isvara.

Question:  What is the freedom, according to Sankhya, that the purusha achieves by understanding that it is distinct from matter?

Answer: From Classical Sankhya point of view, it becomes free of material conditioning. It has no other freedom in the liberated state. It becomes free from suffering, but remains inactive. Classical Sankhya accepts purusha as conscious but inactive, and prakriti as inert but full of action. They support it from Gita verse 13.20 (13.21 in the ISKCON version).

Question: Is Sankya similiar to Buddhism? 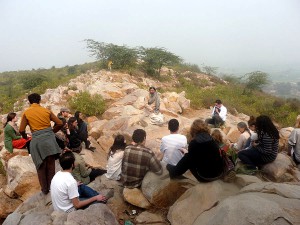