Home  |  Observation of the Yugas

Observation of the Yugas 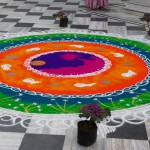 Question: I have a new observation to share with you regarding the yugas.  SB 1.4.14 says that the Vyasa began his work when the Second Age was on the verge of beginning. SB 1.4.20 says that he began by creating the Rg and other three Vedas.  SB 1.4.23 indicates that the further development of literature took place as a combined effort of sages under Vyasa’s leadership over a span of many generations. The remainder of the chapter and beginning of the next makes it clear that after seeing the compilation of so many expansive Upanishads and Puranas, Vyasa remained dissatisfied and later became inspired by Narada to create the Bhagavatam to remedy his dissatisfaction. So Bhagavatam is the last effort.

We hear elsewhere in the text itself that Bhagavatam was created just after Krishna’s departure from the Earth and the beginning of Kali Yuga.

Astronomically speaking we know with sufficient confidence that the Rg Veda was created roughly 5,000 years ago – because it specifies that the “first star” was Krittika (Pleiades) and we can reconstruct the movement of the vernal equinox (the starting point of the celestial circle) to see that it was last in Krttika about 5,000 years ago.

This indicates that 5,000 years ago is when Vyasa began his efforts, not when he completed them by creating the Bhagavatam. So it seems to be a clear indication that 5,000 years ago was the beginning of the Second Age (Dvapara). And that Kali Yuga began several generations of sages after that.

Your thoughts on this would be very valuable.

Answer: While commenting on the SB verse 1.1.14,  Sri Jiva, Sri Visvanatha and some others explain that it was the end of Dvapara and not the beginning. The word tRtiye (lit., in the third) is taken to mean the third part of Dvapara. Every yuga has three parts – the first sandhi (conjunction or twilight) part, the main part and the ending sandhi part. This is in harmony with the fact that the Bhagavata was heard by Pariksita after its composition, and Mahabharata was first recited in the yajna of Janmejaya. Both Pariksita and Jamejaya were born towards the end of Dvapara.

This will not support the smaller span of the yuga theory.

Also, in the very same chapter, after verse 1.4.14, the whole description is of the vision of Kali which Vyasa had. Forseeing the plight of people in Kali, he engaged in the big work of organizing  the Vedas and then wrote Mahabharata for those who were not eligible to study Vedas. This certainly happened at the end of Dvapara and not at the beginning