No One Falls From Vaikuṇṭha – Part 9 (Bhagavat Sandarbha, 51)

Our disputant may set forth yet another objection: If this section is properly analyzed, we can conclude that it refers only to those devotees who reach Vaikuṇṭha from the material world. This can be ascertained by studying the six items that determine the import of a text, such as its opening and closing statements. These are described in the following verse

Our disputant may set forth yet another objection: If this section is properly analyzed, we can conclude that it refers only to those devotees who reach Vaikuṇṭha from the material world. This can be ascertained by studying the six items that determine the import of a text, such as its opening and closing statements. These are described in the following verse:

The disputant may argue that the opening verse, concluding verse and the Upaniṣad mantra quoted in the section currently under discussion, all refer to the jīva who attains Vaikuṇṭha from the material world.

Answer: This type of analysis is applied only when ambiguity exists about the subject of a book, chapter or essay. But such is not the case here. It is clearly evident that Śrīla Jīva Gosvāmī is discussing the qualities of Vaikuṇṭha. He listed nine characteristics of Vaikuṇṭha in Section 49, and is now explaining them in detail. In this present section, he is arguing that one of Vaikuṇṭha’s divine characteristics and proofs of its transcendental nature is that no one falls from there (tato’skhalanam).

Moreover, even if one follows the method of analysis recommended above and concludes that the subject of the section is that those who attain Vaikuṇṭha from the material world never again fall, this does not prove that eternal associates fall. This section makes no such statements, directly or indirectly, and to form such a conclusion is highly improper. On the contrary, the second verse spoken by Lord Kapila (SB 3.25.38), clearly states that Kṛṣṇa’s devotees are never bereft of opulence. Jīva’s intention in quoting it is to say that they never fall. 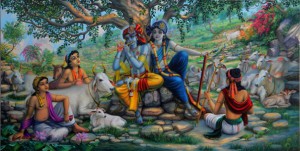 Yet another objection may be raised: The cycle of creation and destruction of the material world is beginningless and has thus occurred innumerable times. During the maintenance period, some jīvas occasionally attain liberation. If living beings continue to exit the material world and no new souls enter by falling from Vaikuṇṭha, then the universe should have been empty by now. Thus, according to this reasoning, it would be logical to assume that an equal number of souls fall from Vaikuṇṭha to replace those who achieve liberation from the material world.

Answer: Such a concept results from ignorance of the unlimited nature of the Lord. There are unlimited material universes, and each contains unlimited living beings. Unlimited means that when some are removed, an unlimited number still remain. Even in mathematics, infinity minus infinity equals infinity. There are an infinite number of points existing in a line that extends from point A to point B. If this line is divided into two parts, say AC and CB, each line still contains an infinite number of points.

The prayers of the personified Śrutis (SB 10.87.30) acknowledge that there are unlimited or countless living beings (aparimita). In commenting on this verse, Śrīla Sanātana Gosvāmī quotes Vajra Mahārāja’s question to the sage Mārkaṇḍeya from the Viṣṇu-dharmottara Purāṇa (1.81.12):

O brāhmaṇa, because time has no beginning, therefore even if only one person achieved liberation in each of the bygone kalpas, wouldn’t the world be empty by now?

Mārkaṇḍeya’s answer is as follows:

When someone is liberated, the Supreme Lord, who possesses unlimited potency, brings forth (sargeṇa) another jīva and thus always keeps the world full. Those people who achieve brahma-loka become liberated along with Brahmā. Then in the next cycle of creation (mahā-kalpa), the Lord emits (sṛjyante) similar beings. Material nature and the living beings should be understood to be beginningless. Their transformations and the guṇas of matter are products of material nature.

Therefore, there is no need to assume that living beings fall from Vaikuṇṭha to replace the liberated souls. The important word in Markaṇḍeya’s reply is acintya-śakti, or inconceivable power. This has been discussed in greater detail in earlier sections of this book. Without accepting the existence of this astonishing potency of the Lord, one can never hope to understand Him in truth.

A doubt may be raised, however, in regard to Mārkaṇḍeya’s statement. Living beings are said to be beginningless (anādi). Why then does Mārkaṇḍeya say that the Lord brings forth (sargeṇa) other jīvas?

Śrīla Sanātana Gosvāmī answers that there are unlimited dormant living beings, which the Lord activates as He desires. This is what is meant by the term “brings forth” in the above verse. The word sarga, or creation, does not mean producing new living beings. This siddhānta is accepted by all Vaiṣṇavas.

Actually, the verb sṛjyante (He creates) is used here to mean “emits.” It comes from the root √sṛj visarge, which can be used to mean either “to create” or “to emit.” Since the first meaning would contradict many other statements asserting that the jīva is never created, we must take the second meaning here. Sṛjyante then means to release the jīva from the dormant state into the active condition.