No One Falls From Vaikuṇṭha – Part 6 (Bhagavat Sandarbha, 51)

No one can enter or remain in Vaikuṇṭha unless he has attained devotion for the Lord. Lord Ṛṣabhadeva confirms this: When the living being is covered by tamo-guṇa, his mind is subject to result-oriented action. Therefore, the jīva cannot be released from attachment to the body until love dawns for Me, Lord Vāsudeva.

No one can enter or remain in Vaikuṇṭha unless he has attained devotion for the Lord. Lord Ṛṣabhadeva confirms this:

When the living being is covered by tamo-guṇa, his mind is subject to result-oriented action. Therefore, the jīva cannot be released from attachment to the body until love dawns for Me, Lord Vāsudeva. (SB 5.5.6)

In the principal verse (SB 3.25.38) of this anuccheda, spoken by Lord Kapila, it is said that devotees have different relationships with the Lord. According to Śrīla Rūpa Gosvāmī, there are five basic rasas, or aesthetic experiences, that the Lord enjoys with His devotees. These varieties of aesthetic experience are rooted in, and arise out of, five foundational moods of loving devotion. Out of these five, the devotees immersed in peaceful devotion, or śānta-rasa, have the least intensity of love for the Lord. Nonetheless, they are completely devoid of material desires and have strong faith in Him. Śānta-bhaktas cannot be considered non-devotees, nor is there any possibility of their falling down.

In commenting on this verse (yeṣām ahaṁ priya ātmā sutaś ca sakhā guruḥ suhṛdo daivam iṣṭam), Śrīla Viśvanātha Cakravartī says that those who consider the Lord as priya, or the beloved, refers to devotees in amorous devotion; similarly, those who consider Him as ātmā, the Self, refers to those in peaceful devotion; suta, or son, to those in parental devotion (vātsalya rasa); and sakhā, friend, to those in devotional friendship (sakhya-rasa). Those who consider Him as guru, in this case a respectful elder, refers to devotees with a specific type of respectful devotion (dāsya-rasa); suhṛda, bosom friend, to devotees in a specific type of devotional friendship (sakhya-rasa); and the words iṣṭam, the worshipful Deity, and daivam, the Lord, to those in different kinds of respectful devotion (dāsya-rasa).

The words śānta-rupe, the abode of unalterable peace, in the same verse, mean that Vaikuṇṭha is beyond the material guṇas (viśuddha-sattva.) Although Vaikuṇṭha is a place, its nature is identical to that of the Lord—eternal, conscious and blissful—and it is thus unlike any material place. The opulence of the devotees in Vaikuṇṭha never perishes. That is to say, they never descend to the material dimension. This is confirmed by hundreds of verses both in Śruti and Smṛti. The Chāndogya Upaniṣad states:

Drawing his senses within, he does not cause violence to any being, other than in circumstances of mortal danger where scripture may call for appropriate aggression. Remaining in this condition till the moment of death, he attains the spiritual abode. He does not return. He does not return. (ChU 8.15.1)

Śrīla Vyāsa Muni concludes the Vedānta-sūtra by repeating the words: “There is no return (from Vaikuṇṭha) because the scriptures declare this as truth” (anāvṛttiḥ sabdād anāvṛttih śabdāt, VS. 4.4.22).

Śrīla Baladeva Vidyābhūṣaṇa, while commenting on this sūtra, confirms the same by quoting the following mantra from Chāndogya Upaniṣad:

He leads them to Brahman. This is the path of the godly (devas) that leads to the Lord. Those who walk on this path do not return to this human life. Surely they do not come back. (ChU 4.15.5)

Śrī Baladeva Vidyābhūṣaṇa says that the Lord is determined not to abandon His devotees, and His devotees are equally determined to love Him. Thus, they can never leave Him. One should never doubt this.

While instructing Yudhiṣṭhira Mahārāja in the Āraṇya-dvādasī-vrata, Lord Kṛṣṇa says:

Therefore, they attain the auspicious and blissful abode of liberation. Having attained it, they neither lament for anything nor return to the cycle of birth and death. (Bhaviṣya-purāṇa, Uttara-parva 66.26)

Not illumined by the sun or moon, nor by fire, such is My supreme abode, attaining which one never returns to this material world. (Gītā 15.6)

And there are many other such verses in the Gītā. 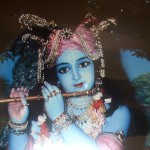 Despite the clarity of this evidence, one might claim that the above verses mean that those who reach Vaikuṇṭha from this material world never return, and that only those who have never been to this material world can fall down. In other words, those who achieve Vaikuṇṭha have experienced the miseries of the material world, but the nitya-siddhas are ignorant of these and are subject to falldown. The logic is that a person who has burned his tongue with hot milk is so careful that he even blows on buttermilk before drinking it.

This is an inconsistent argument. Before reaching Vaikuṇṭha, the devotee casts off his gross and subtle bodies. The experience of the material world remains in the subtle body, so the devotee does not carry it with him. In the material world we carry a stock of impressions in our subtle body, but how much of it do we remember? Indeed, we cannot recollect most of the things we have done even in this lifetime. How then is it to be expected that a liberated soul would remember the miseries of the material world? And why would he? What is the gain? Is the remembrance of past material miseries more captivating than the immediate and present ecstasy of service to the Lord? Whenever sustained joy fills a person’s life, memories of past pain or suffering fade into the background.

Moreover, even if the devotee, after attaining Vaikuṇṭha, wanted to recall his former material experience, he no longer has a subtle body in which all the impressions would be stored. Those memories are wiped clean without a trace. In Bhakti-rasāmṛta-sindhu (1.1.23), Śrīla Rūpa Gosvāmī writes that bhakti destroys all varieties of karma.