No One Falls From Vaikuṇṭha – Part 4 (Bhagavat Sandarbha, 51)

July 14, 2013Articles by Satyanarayana DasaPhilosophyShastraComments Off on No One Falls From Vaikuṇṭha – Part 4 (Bhagavat Sandarbha, 51)

(2) There is no possibility of committing sin in the spiritual world. Sin and piety exist only in the material world, both being products of the guṇas of nature. A devotee in the spiritual world is situated in his eternal inherent nature (svarūpa), free from material covering or ignorance—muktir hitvānyathā-rūpam svarūpeṇa vyavasthitiḥ (SB 2.10.6). Mukti means to give up the subtle and gross bodies and become situated in one’s original nature. In Bhagavad Gītā, Lord Kṛṣṇa explains that all sins are burned in the fire of transcendental knowledge:

Even if you are the most sinful of all sinners, you will be able to cross over the ocean of miseries in the boat of knowledge. As a blazing fire reduces fuel to ashes, O Arjuna, so does the fire of knowledge reduce all karma to ashes. (Gītā 4.36-37)
Some rare souls who are completely devoted to Lord Vāsudeva totally destroy all their sins by their exclusive devotion, just as the sun immediately dissipates fog with its rays. (SB 6.1.15)

This point was also described in Section 47 of Tattva-sandarbha, in regard to the explanation of Vyāsa’s trance:

By hearing this Śrīmad Bhāgavatam, one is blessed with devotion to Kṛṣṇa, the Supreme Person. This devotion puts an end to all mourning, bewilderment and fear. (SB 1.7.7)

Śrīla Jīva Gosvāmī’s commentary on this verse explains that even the most subtle impressions of sin are destroyed. Lord Kṛṣṇa Himself instructed Śrī Uddhava in this same principle:

Uddhava, just as a blazing fire turns firewood into ashes, devotion to Me completely burns My devotees’ sins to ashes. (SB 11.14.19)

The word kṛtsnaśaḥ (completely) is important. It means that ignorance, which is the root cause of sin, is also completely destroyed along with the external effects of sin.

All the gods come and invest their qualities in one who is devoted to the Supreme Lord without independent interest or desire. On the other hand, where are the great virtues of a person not devoted to Lord Hari, whose desires lead him to wander about in the superficial and impermanent realm? (SB 5.18.12)

A devotee has no desire to harm even those who consider him their enemy. Prahlāda Mahārāja is the ideal example. He remained concerned about his father’s welfare even though the latter tortured and tried to kill him in various ways. Devotees are peaceful, tolerant, merciful and always disposed toward everyone’s welfare. Lord Kapila confirms this:

Those established in Truth are tolerant, merciful and friendly to all beings; their enemy is never even born, and so they are situated in unalterable peace. Such persons are jewels amongst the virtuous. (SB 3.25.21)

There are some stories in the Purāṇas wherein devotees curse each other, but this is just to set the scene for the unfolding of the līlā, and no truly inimical feelings are present. Even when devotees come to the material world as a result of a curse, they are not placed under the influence of the guṇas of material nature. They remain for the prescribed duration and assist in the Lord’s bhauma-līlā, or manifest pastimes on earth. Jaya and Vijaya’s descent to the earth was not the result of the curse of the Kumāras; it was impelled by the will of the Lord:

The Lord said to His attendants, Jaya and Vijaya, “Go, but fear not. May peace be with you. Though I am capable of stopping the brāhmaṇas’ curse, I do not wish to do so. In fact, I approve of it.” (SB 3.16.29)

Just as those who visit a prison do not become prisoners, so those devotees who are so-called “cursed” to come to this material world to assist the Lord in His līlā are not bound by the guṇas of nature. The associates of the Lord are almost as powerful as the Lord Himself, as stated in the Bhāgavatam:

They saw Him with eyes resembling a pair of full-blown autumn lotuses, and surrounded by His sixteen associates, who appeared exactly like Him, only without the mark of Śrīvatsa and the Kaustubha jewel. (SB 6.9.29) 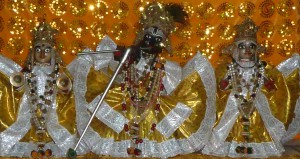