No One Falls From Vaikuṇṭha – Part 11 (Bhagavat Sandarbha, 51)

September 1, 2013Articles by Satyanarayana DasaGaudiya VaishnavasPhilosophyShastraComments Off on No One Falls From Vaikuṇṭha – Part 11 (Bhagavat Sandarbha, 51)

Teaching is an art. An expert teacher is one who educates in such a way that the students embrace the teaching as their own, without confusion or degradation. The conditioned souls, being unaware of any other reality, do not aspire to become free of the material world, but would rather be happy in this life, or at best, in some future heaven. Yet a compassionate teacher is moved to help relieve them of their material identification.

Teaching is an art. An expert teacher is one who educates in such a way that the students embrace the teaching as their own, without confusion or degradation. The conditioned souls, being unaware of any other reality, do not aspire to become free of the material world, but would rather be happy in this life, or at best, in some future heaven. Yet a compassionate teacher is moved to help relieve them of their material identification. Hence, there is an apparent clash of interest. To overcome this, the discerning teacher often has to devise a strategy, just as parents may conceal medicine within candy to induce their sick child to take it. In the Pūrva-mīmāṁsā, this is called parisaṅkhyā-vidhi, or using an injunction to accomplish something other than the apparent aim. Hence, it is not always easy to understand the intent of scriptures. The sage Āvirhotra confirms this:

Prescriptions, prohibitions and transgressions of prescribed duty are to be known from the Veda and not just through hearsay. Since the Veda is the direct revelation of God, even the devas are confused about these three types of actions. The Veda speaks indirectly. Its real import is to impel one to transcend karma and its fruits, but it prescribes karma for the ignorant, just as a child is tempted with sweets in order to make him take a bitter medicine. (SB 11.3.43-44)

Mere citing of references will not establish the truth conclusively. One has to analyze the scriptures thoroughly and objectively to understand the actual intent hidden within the hoards of recommendations for fruitive action, and to reconcile the various apparent contradictions. One must appropriately resolve all apparent contradictions by properly understanding the relative strength of various scriptural statements. Not all scriptural statements carry equal weight or authority; some can override others. For example, the famous statement, kṛṣṇas tu bhagavān svayam, “Lord Kṛṣṇa, however, is Himself the complete personal nondual Absolute” (SB 1.3.28), is recognized as an “emperor statement,” or mahā-vākya. It overrules all other statements that describe Kṛṣṇa as an avatāra of someone else. This statement is not whimsically accepted to be of the highest authority, but is established as such in accordance with accepted rules of logic. This will be demonstrated in Kṛṣṇa-sandarbha.

Of the four chapters of Vedānta-sūtra, the first is called samanvayādhyāya, or the chapter on reconciliation, since the purpose is to reconcile the numerous apparent contradictions in the various Upaniṣaḍs. So, the tradition of using tarka, or appropriate logic, is well established, and Śrīla Jīva Gosvāmī has rightly accepted it as a means to establishing the śāstric conclusion. The point is that the conclusions reached must not contradict scripture.

One approach to analyzing a philosophical conclusion is by observing whether there is conformity between sādhu, śāstra and guru. Of these three, śāstra stands supreme. Indeed, without śāstra we cannot even know the true characteristics of the other two. The degree of completion and truth-resonance, or the falsity, of any teaching, even those of various avatāras, can be assessed based on a thorough and cross-contextual visioning of all scripture. It is on the authority of śāstra that the teachings of Lord Buddha, for example, are identified as pertaining strictly to non-theism, even though He is taken to be one of the avatāras of Viṣṇu (which is to say, almost with a tinge of irony, that Buddha is God teaching that there is no God). At the same time, however, we must not forget that śāstra is understood through the medium of guru and sādhu. This makes the process a little more complex than it may first appear. Without receiving instruction in an authorized paramparā, one will easily get lost in the jungle of scripture.

We have seen the śāstric conclusions regarding the topic under discussion. These are accepted by all other Vaiṣṇava sampradāyas without any quibbling. Our stalwart ācāryas, like Śrīla Jīva Gosvāmī, Śrīla Viśvanātha Cakravartī Ṭhākura and Śrīla Baladeva Vidyābhūṣaṇa confirm this view, and thus the sādhus are in agreement. On the other hand, we can find no scriptural statements and no commentary by a previous ācārya that describe a fall from the spiritual world. A sampradāya is based on the conclusions of prasthāna-trayī, or Śruti (Upaniṣads), Smṛti (Bhagavad Gītā) and Nyāya (Vedānta-sūtra). We see that the prasthāna-trayī does not support that the jīva can fall from Vaikuṇṭha. In Vedic culture every authorized sampradāya establishes their siddhānta based on prasthāna-trayī, and any conclusion inconsistent with this standard is considered to be apasiddhānta, or a faulty view. 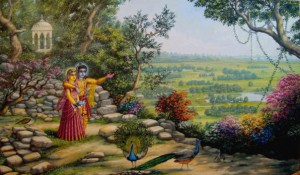