This Songbook has been compiled for the use of students at Jiva Institute and friends. The songs and prayers contained in it are the compositions of the great teachers of the Gaudyīa Vaiṣṇava school, who teach the mood of surrender and pure devotion. They are in Sanskrit, Bengali, Braja-bhāṣa and also in Hindi and have English translations.

The book also includes some important prayers and songs from Śrīmad Bhāgavata Purāṇa, which are part of the daily morning program of Babaji Satyanarayana Dasa at Jiva Institute, Vrindavan. The study of these prayers is highly recommended by Śrī Jīva Gosvamī in Bhakti Sandarbha.

According to him, Śrīmad Bhāgavata Purāṇa is the most important and practical scripture for understanding both Absolute Reality and the process leading to direct experience of it. In Tattva Sandarbha, he shows that Bhāgavata Purāṇa depicts the supreme goal of life as the attainment of love for Kṛṣṇa, and the means to attain that goal as bhakti. There are various aspects of this process, but the most efficacious practice in the present age of Kali is kīrtana. According to Śukadeva Gosvāmī one can attain perfection merely by performing kīrtana:

“O King, Kaliyuga is the storehouse of vices, but it has one great quality: Merely by performing Kṛṣṇa-kīrtana one can become free from material bondage and attain the supreme goal [kṛṣṇa prema].” (SB 12.3.51)

Śukadeva also adds that kīrtana bestows whatever benefit one could attain by meditation in Satyayuga, by ceremonial sacrifice (yajña) in Tretāyuga, or by elaborate temple worship in Dvāparayuga. Therefore, wise people who understand the essence of śāstra appreciate Kaliyuga (SB 11.5.36).

The sage Karabhājana confirms that truly intelligent people worship Bhagavān by sankīrtana yajña in this age of Kali:

“In the Age of Kali, Bhagavān appears within this world with a non-blackish complexion and constantly sings or describes the names of Kṛṣṇa, accompanied by His associates, servants, weapons, and confidential companions. Those endowed with discriminating wisdom worship Bhagavān in this form primarily through the sacrifice of kīrtana, involving the totality of one’s being.” (SB 11.5.32)

To stress the importance of saṅkīrtana, Śrī Sūta Gosvāmī ends his narration of the Bhāgavata by praising nāma saṅkīrtana:

“Nāma saṅkīrtana destroys all sins from the root. I bow down to Hari, for doing so quells all suffering.” (SB 12.13.23) 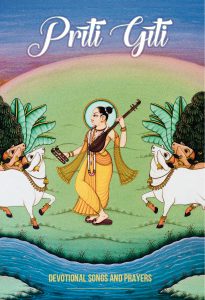 It is well known that Śrī Caitanya Mahāprabhu initiated the saṅkīrtana movement and popularized it in India. Indeed, saṅkīrtana is the hallmark of the Gauḍīya School. Many of our ācāryas wrote padyāvalīs, virudāvalīs, vijñaptis, stotras, and prārthānas, describing the name, form, quality, and divine play of Kṛṣṇa and His devotees. Other Vaiṣṇava sampradāyas lay great stress on vigraha sevā (deity worship), but the Gauḍīya School lays foremost stress upon saṅkīrtana and nāma japa.

The Songbook is now available for ordering in our Online Store!