It is with great satisfaction that we announce that henceforth the On-line Gaudiya Grantha Mandir will be hosted by the Jiva Institute servers (grantha.jiva.org) and will continue to grow and develop under the protection of the Institute. 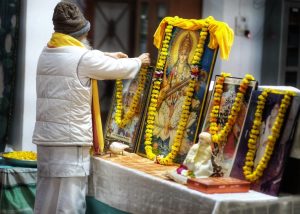 Satyanarayana Dasaji, Mahanta and Acharya of the Jiva Institute of Vaishnava Studies in Vrindavan has agreed to include the Gaudiya Grantha Mandir as a part of its growing list of projects dedicated to its core purpose of Sanskrit learning, preservation and dissemination of Sanskrit texts, directly or indirectly related to the Vaishnava tradition.

Mahanta Maharaj has long recognized the value of the Grantha Mandir project and has been giving support, both moral and material, for several years now. He says,

“Every sampradāya is based upon a set of śāstra, and the Gauḍīya sampradāya is no exception to that. Because the śāstras have such an important role to play, it is important to protect them and make them easily available. The Jiva Institute houses a physical library and it was my desire to also have an e-library of the important works of our acharyas. Such an electronic library should have all the facility for search and research. Jagadananda Das has been working on Gaudiya Grantha Mandir for many years. I have been giving him a little assistance and wanted that it becomes part of Jiva Institute. Finally we have been successful in securing it and we want to expand it to include not only the original Gaudiya texts but also the texts that have been referenced in them.”

This is a project in the spirit of Bhaktivinoda Thakur, Ramnarayan Vidyaratna, Siddhanta Saraswati, Haridas Das Babaji, Puridas Mahashaya, Kusumsarovarwala Krishnadas Baba and the many other great discoverers and dedicated researchers of Vaishnava literature over the last two centuries. It is simply carrying on the work in a way that takes advantage of modern information technology. 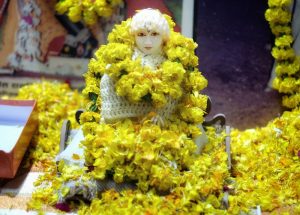 The site was first started by Neal Delmonico more than 20 years ago. I had already started digitizing texts during my days in London as a PhD student, being inspired by the then still new information technological developments and seeing their possibilities for computer-aided research. At SOAS Prof. Peter Schreiner had been encouraging scholars to digitize any texts that they were working on and to contribute these to the wider scholarly community.

I wanted to participate in that and began by typing out whatever texts I happened to be working on and uploading them to the Grantha Mandir website. Over the years, I have continued improving his library of digital texts. Over 600 are now available on the site. By 2008, we had over 500 000 downloads!

However, the possibilities provided for researchers through infotech have expanded considerably since GGM first started. Nevertheless, as I get older, I was afraid that the database I have built would go to waste if there were no support for the project. The connection with Jiva means that such support will be forthcoming. 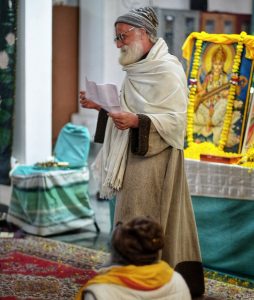 The original idea of the Grantha Mandir was to be able to enter as fully as possible the mind of someone like Jiva Goswami by having full access to the very texts that he would have known. It may never be fully possible to ever duplicate that, but it would certainly be helpful—not only for knowing what he accepted but also for what he rejected. The all-important search function that GGM texts allows for the kind of quick research that was never before possible. But there are immense possibilities of developing a research tool that would be of immense utility in studying the Vaishnava tradition. In particular, I envision an interactive tool extensively hyperlinked that makes text analysis practical and fruitful.

This project is very ambitious and is far too much for one person to do. At this point, the immediate need is to simply continue expanding the database to fill out the texts that are still not completed and editing and correcting the ones that are already done.

We need volunteers to help make it work and realize its complete. We could also use donations so that we can hire some people to type and do other things; it is also very important to find someone to manage and upgrade the site.

The list of texts we still want to get on the site is still fairly lengthy. The addition of the considerable corpus of Bengali and Brajbhasha texts is one direction into which we hope to expand, but there is no shortage of Sanskrit works that need to be made available for researchers.

Although by now there are hundreds of devotee scholars who work with these texts, very few of them have thought to participate in this project, which requires qualified proofreaders, etc. But it is hoped now that with the support of Jiva Institute, the project will get new credibility with the result that it will also get new energy and impetus.

If it is at all possible, I would like to see forums, newsletters, membership packages, etc., and other ways of creating a scholarly devotional community centered around the Sanskritic tradition.

Your help and support will be most welcome!