Question: There is some evidence that Rama-Laksmana-Sita’s diet is meat from hunting. Some examples:

In the Ayodhyakanda, on the first night of exile, Rama fasts. The next day, after walking a long while by the Ganges, “On the further bank the brothers killed four large animals–a boar, an antelope, a gazelle and a great black buck. They were famished and took meat hurriedly …” (II. 46.78-79). What do you say to that?

Answer: Yes, that is possible. It is also described in Mahabharata that the Pandavas killed deer for yajna. My only defence is that shastra has its own adhikaris – for whom it is written. Except for Srimad Bhagavatam everything else is part of varnashrama – with dharma,artha, kama and moksha as their purusarthas. If our purusartha is prema or priti, then SB is the authority and SB is very clear about meat eating (see verses 11.5.11,13). This is the Amala Purana, and it speaks of parama dharma free of kaitava [cheating] (SB 1.1.2). Therefore anything which contradicts SB has to be rejected.

There is a principle of bala-abala vicara [different significance] while considering shastric statement and SB is supreme. It overrides everything else. 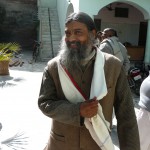 Question: I just had a consultation and one of the things the therapist prescribed was Tulasi tea. I recall having heard from a friend that Tulasi was not meant to be ingested. Can you clarify for us please?

Answer: He must be speaking from Vaishnava point of you. As Vaishnavas, we rever Tulasi as a great devotee of Krsna. We use it in His service. We can ingest it as prasada after it has been offered to Him. Tulasi leaves are put on top of any food offered to The Lord. They are also offered to His feet and these leaves can be ingested as prasad but we do not take tulasi leaves directly and ingest them. This is a Vaishnava principle.

Question: There has been some controversy regarding addressing women as prabhus.The argument against doing so is from an etiquette perspective and maybe a more technical application to the word itself.  I’ve heard some argue against addressing women in this way by using the argument that prabhu is only used for the masculine gender.  Based on your understanding, both from a Vedic perspective and a grammatical one, would you say a women should not be addressed in such a manner or is it ok to do so.  I, for one, have and continue to address Vaisnavis of a high caliber in this manner.  I will not quote you on this one, I am just curious what others think about this issue.

Answer: In Vedic society there is no tradition of calling women prabhus; moreover, prabhu is used for masculine gender and sounds very odd to the ears of those who know it. It is like calling a woman ‘Sir’. But these days women are becoming more like men and if they like to be addressed as prabhus why shall I object? Let them be happy!