If one performs yajña without material motive, the result is subduing of rajas and tamas and predominance of sattva. In turn, this grants clear knowledge of the self, jñāna. Kṛṣṇa confirms this in the (Gīta 4.33), sarva karmākhilaṁ pārtha jñāne parisamāpyate, “O Arjuna all endeavors culminate in jñāna.” Therefore jñāna, too, can be created.

If one performs yajña without material motive, the result is subduing of rajas and tamas and predominance of sattva. In turn, this grants clear knowledge of the self, jñāna. Kṛṣṇa confirms this in the (Gīta 4.33), sarva karmākhilaṁ pārtha jñāne parisamāpyate, “O Arjuna all endeavors culminate in jñāna.” Therefore jñāna, too, can be created.

Love, although a type of jñāna (a type of experience or awareness), is not like this because it cannot be manufactured. It neither depends on nor is produced by any yajña. It comes only by the grace of Bhagavān or His devotee. 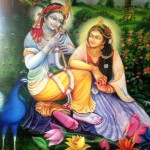 At the beginning of this anuccheda, Śrī Jīva Gosvāmī quoted Prahlāda describing prīti for Bhagavān by analogy with material prīti. This may lead us to believe that both types of love are the same, which would be a mistake. But this is an unavoidable danger, because prīti for Bhagavān is non-material and all our experiences are material. There is no other choice but to give definition of material prīti and then try to understand the non-material one. The difficulty in distinguishing the two types of prīti arises from their similar manifestations externally. But when one studies the hearts of two different persons who have two different types of prīti, then one can understand that these two types of prīti are not same. It is like the appearance of brass and gold, which is the same only externally. Therefore, there is a need for scriptural authority to distinguish between these two types of prīti.

While analyzing prīti, Śrī Jīva Gosvāmī said that word prīti can mean either sukha or priyatā. He then explained the difference between them. Now he says that out of the two meanings of the word prīti, it is only the second meaning, i.e., priyatā, which is applicable to prīti for Bhagavān. The definition of prīti in conventional relationships is the same as the definition of prīti for Bhāgavan, and comprehension of the former facilitates comprehension of the later – on the principle of analogy (atideśa). In present day society, traditional family bonds have been shattered beyond repair, and people in general have little or no experience of even conventional prīti. Their only experience is of sukha, things that make them happy, and they conceive of “love” in this way. The whole modern society is geared towards sukha, and against prīti. Thus, even to comprehend conventional love is a Gordian’s knot.

There is also a distinction, however, between conventional love and love for Bhagavān. Conventional love is manifest within māyā, and love for Bhagavān is manifest within Bhagavān’s svarūpa-śakti. To substantiate that conventional love occurs within māyā, Śrī Jīva Gosvāmī quotes Kṛṣṇa (Gītā 13.6) describing the various modifications of the material body (kṣetra). These include icchā and dveṣa. Literally, iccha means desire, but here, contrasted with dveṣa (hatred) it refers to love (prīti). Earlier it was said that the opposite of prīti is dveṣa. Also, the word sukha in this verse can refer to the inferior prīti. Śrī Jīva Gosvāmī already showed that sukha is one of the meanings of prīti.

After defining the word prīti, Śrī Jīva Gosvāmī says that sometimes the word bhakti, which is derived from the root bhaj, is used in its place. But he informs that not all of the words that can be formed from the root bhaj equate with the meaning of prīti. Only the words bhakti and bhakta are synonymous with prīti. In essence, bhakti is a synonym of prīti, and bhakta is one who has prīti. The root bhaj is transitive, but when it is used in the sense of prīti, it becomes intransitive.

In this way, Śrī Jīva Gosvāmī explained bhagavat-prīti by comparing and contrasting it with material prīti.

The distinction between prīti and its experience is stated by sage Kavi in SB 11.2.43:

“Bhakti, renunciation, and realization of Bhagavān appear simultaneously in a surrendered soul.”

In this verse, the word bhakti refers to prīti, and bhagavat-prabodha refers to the experience of Bhagavān. They are treated as distinct entities. Similarly, Kṛṣṇa also makes this distinction in verse 11.54 of the Gītā.

“Only through one-pointed bhakti, O Arjuna, can I be known in essence, seen in this form, and even be truly entered into.”

The word bhakti here means prīti, and it is by this prīti that one can know, see, and enter into Kṛṣṇa.

At the end of this anuccheda, Śrī Jīva Gosvāmī gives the definition of prīti made by Kapila in Śrīmad Bhāgavatam, the supreme authority on the Absolute Reality. The additional points made in this definition are that prīti is only for Kṛṣṇa and His plenary manifestations (svāṁśas). It is not for any other deva, such as Śiva. Prīti is natural. There is no effort involved in it. It just happens naturally. It is not an effect of material actions. It is superior to liberation. It is a specific energy of Bhagavān and thus beyond the guṇas of prakṛti. Its very nature is intense bliss. Thus, prīti does not lead to something else. It is its own result. This also proves that it is the ultimate goal. Being eternal and not a product of any material action, it appears by the grace of Bhagavān or His devotee. It is also given the name vṛtti (mental state) by Kapila, because it descends into the mind of a devotee – imbuing that mind with itself, like fire contacting an iron rod and making it hot. 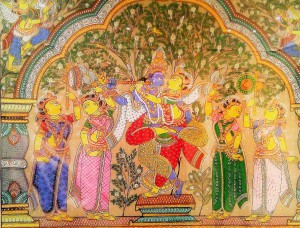