March 21, 2015Questions & AnswersComments Off on Krsna’s Body, Dramatic Writing according to Siddhanta

Question: In Bhagavad Gita the Lord says ‘ksine punye martya-lokam vishanti’ and also we know from scriptures like Brhad-bhagavatamrita that the demigods regularly have the audience of Lord Vamanadev. So they develop such devotional credits by being in the direct presence of the Lord and serving Him in some ways. So how is it possible that they can fall to the lower realm of earthly existence. How can their punya due to bhakti be exhausted? Kindly clear my doubt.

Answer: They come down to perfect their devotion. When they become free of any material desires, they enter into Vaikuntha. So it is not a fall-down like others whose punya is over. If one is executing bhakti in heaven or in hell, one is devotee. In case of a devotee, fall-down means giving up bhakti. Otherwise a devotee sees heaven and hell as same – svarga-narakapavagamapi tulyarthadarshinah.

Question: One devotee was making a point that when Krishna or any avatara of the Lord comes to this material world, they take on a suitable body so that people can witness Him. For example in Krishna-lila, people like Kamsa, Duryodhana, etc. actually saw Krishna, but they did not see His spiritual form. In the wrestling arena in Mathura, Kamsa saw Him as death personified, other wrestlers saw Him as a lightning bolt, etc. Also Krishna says in Gita (9.11), avajananti mam mudha manusim tanum asritah: “Foolish people deride Me when I appear in a human form”. It means that Krishna actually takes a human form but it is like an iron rod in fire. When that body is in contact with Krishna it actually becomes surcharged with power and opulence. That body is ‘sat-cit-ananda’ because it is beyond the modes of nature. Just like the spiritual master, he is a manifestation of the Lord. The Lord comes to you as your guru because you cannot see Him directly because you have material senses and the Lord is all-spiritual. Even if the Lord was to come before you in His spiritual form, you will not be able to see Him, hear Him or touch Him.

Maharaj, I tried to explain to this devotee that the Lord never deals with the material energy directly. He comes to this world in His spiritual form. Because He wants the people to see Him they can see Him. But this devotee did not accept it. I was not able to convince him. Actually this devotee has studied the Sankara-bhasya on Vedanta-sutra and it seems to me that some tinge of Mayavada has entered his heart. How to refute his points and establish the correct understanding?

Answer: Krsna does not take any material body or human body. He is what He is, as in the Old Testament, where God said, “I am what I am”. But when He is on earth, different people see Him differently according to their bhava – ye yatha mam. So if one does not have bhakti, then he does not see Him as He is, but He appears like a material person – avajanati mam mudha. That is why they disrespect Him because they do not see anything special in Him. Krsna can do this by His yogamaya. He does not need the help of mahamaya. Mahamaya cannot touch Him – maya pareti villajamana.

So although He is spiritual and cannot be seen by material eyes, during His appearance on earth He desires to be seen by people – sarve mam pashyantu. So yogamaya arranges for that. When a particular devotee is blessed during a period when He is not manifest on earth, then Krsna becomes visible only to such a devotee, but during His avatara period He becomes visible to all. However, He becomes visible as per one’s bhava. There is no need to assume that He takes a material body. 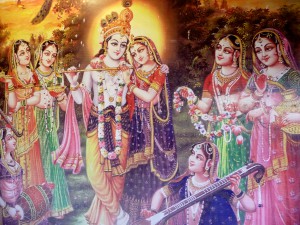 Dramatic Writing According to Siddhanta

Question: Srila Sanatana Gosvami mentions at the beginning of Brhad-bhagavatamrta that he has compiled this scripture by taking the essence of all the bhakti-shastras. A question which came to  my mind is that if it is his compilation, then why does Sanatana Gosvami use Pariksit Maharaj, Mother Uttara, and Jaimini Rsi as the speakers and listeners in his book? Is it not like putting my own words in the mouth of some other people. Is it not imaginative writing?  Please kindly clarify my doubt.

Answer: This is allowed in the writing of kavya or sahitya. This is called kavi-srishti or creation of the poet or author. This is according to the rules of sahitya.

Question: So is the story of Narada Muni going to different devotees like Brahmaji, Prahlad, Uddhava, etc. also kavi-srsti? Sanatana Gosvami is just trying to bring out the inherent mood of these great Vaishnavas in his literature, not that such incidents actually happened. And also, what about the story of Krishna crying in His room in the palace in Dvaraka, and then He entered Nava-Vrindavan, etc, etc. That must also be kavi-srsti, is it not? The author is trying to bring out the emotions of Krishna in relation to the Vrajavasis. Is this correct?

Answer: Narada travelling to different places – yes, it is all kavi-srsti, but based upon Srimad Bhagavatam and other scriptures. The story of Nava-vrindavan has some truth because a similar description is found in Padma Purana. But even if no such description is found in sastra, still there is nothing wrong with it because the purpose is not telling a story but the siddhanta. The story is the medium to convey the siddhanta. The other way is to tell the siddhanta directly, as in Vedanta Sutra. The same thing is told in the form of stories in Srimad Bhagavatam. Read SB12.3.14.

Again, I do not mean that the stories in Srimad Bhagavatam are false. Nothing is false there, but the purpose has to be understood. Read SB 12.3.15