February 28, 2015Questions & AnswersComments Off on Krishna’s Supremacy, Politics without Dharma, Bliss of Bhakti

Question: I am looking for scriptural texts that approximate “krsnas tu bhagavan svayam” in the Bhagavata Purana (1.3.28). From the Gaudiya Vaishnava point of view, this is a paribhasa sutra proclaiming that Krishna is Supreme, i.e., the source of all other divine incarnations.

References for Krishna’s Supremacy in Shastra

Question: I am looking for scriptural texts that approximate “krsnas tu bhagavan svayam” in the Bhagavata Purana (1.3.28). From the Gaudiya Vaishnava point of view, this is a paribhasa sutra proclaiming that Krishna is Supreme, i.e., the source of all other divine incarnations.

There is a similar verse in the Gita Govinda, I am told. I notice that after Jayadeva’s famous list of ten incarnations (in the Gita Govinda’s first song) it is said that all glories should go to Krishna, whose ten incarnations have just been enumerated. Is this the verse that approximates the Bhagavata verse? If so, what is the verse number? In one edition it appears to by 1.15. It is numbered differently elsewhere. Or am I mistaken?

I guess my question is twofold: (1) Where is the verse in the Gita Govinda that approximates that Bhagavata Purana verse mentioned above?

(2) Are there other such verses, in other texts, that declare Krishna to be the avatari as opposed to merely another avatara? Thank you.

Answer: In the current version of Brahma-vaivarta Purana, there is a verse with almost exactly the same words (4.117.12) sarve cAmSa-kalaAh pumsah krsnastu bhagavAn svayam

In the same Purana, there is another verse (4.22.49) which says that Krsna is paripurnatama, the source of all avataras.  But I am personally doubtful of these verses because Sri Jiva Gosvami does not cite them. If they were extant in the Purana available to him, he would have definitely referred to them. It looks that there is lot of change in the Puranas. He refers to the birth story of Suka from Brahma Vaivarta but it is not found in the present editions.
In Krsna Sandarbha he cites a verse from Padma Purana which says, krsnastu bhagavAn svayam, but this verse is not found in the current version of PP. Krsnastu bhagavan svayam is also found in the 92nd chapter of Krsna Samhita. There is also another which also says that Krsna is svayam avatari. It could be in Narada pancaratra, I need to check.

Besides this, I think Brahma Samhita verses 39, and 48 can also be considered, especially krsna svayam abhavat. And of course also the first verse, sarva-karanakaranam.

And the last verse of dasavatara-stottra by Jayadeva says – dasAkrtikrte krsnaya tubyam namah – Obeisances to You, Krsna, who manifests the ten forms.

Power and Politics without Dharma

Question: The centralization of temporal power has been a big problem in the West. Power corrupts if not based on dharma. What is your view on this phenomena?

Answer: In India, in the varnashrama system, the kings ruled but they were under Brahmanas. Thus, there was a balance of power. King’s main business was to see that people follow their respective dharma. Everything else was secondary. It is for this reason that Lord Rama cut-off Shambuka’s head. Whether the story is true or interpolated – the point is very clear. Even Lord Krishna has three avataras of Brahma, Visnu and Siva, to decentralize power.

Question:  I think that democracy will never be good for the development of spirituality in any country. Democracy since 230 years invariably brings money into power by control of the media and corruption. We call this plutocracy. The best would be constitutional monarchy sustained by dharma like in the days of yore. What is your opinion on this matter?

Answer: Democracy or autocracy or plutocracy – nothing will work if the rulers are not trained in dharma. As long as people are conditioned by their body and are ignorant about dharma, nothing will work. There is bound to be corruption.

The Bliss of Bhakti

Question: When bhakti manifests in the heart of a devotee, it is said that the Lord experiences extreme bliss. Can you explain this?

Answer: It is Lord who gives His own energy in the form of bhakti to a devotee. Once the devotee has that bhakti, he/she does loving service to Bhagavan. Then Bhagavan feels delighted with it, although it is an outcome of His own shakti. It is like a father giving money to his young child who goes and buys some nice drink for him. The father feels very happy and says, “Your drink is very delicious”. 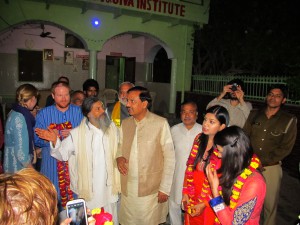